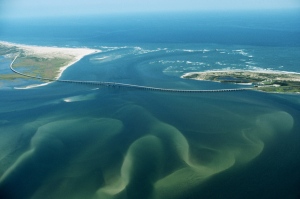 Sand is not the only thing on the move in the waters off the eastern United States — a shift in the Gulf Stream is melting methane hydrate in sediments that could release methane gas.

Somewhere off the eastern coast of North Carolina, a frozen mixture of water and methane gas tucked in seabed sediments is starting to break down. Researchers blame a shifting Gulf Stream — the swift Atlantic Ocean current that flows north from the Gulf of Mexico — which is now delivering warmer waters to areas that had previously only experienced colder temperatures.

“We know methane hydrates exist here and, if warming continues, it can potentially lead to less stable sediments in this region,” says Matthew Hornbach, a marine geologist at the Southern Methodist University in Dallas, Texas, who led the study that is published online today in Nature1. The results suggest that the warmer temperatures are destabilizing up to 2.5 gigatonnes of methane hydrate along the continental slope of the eastern United States. This region is prone to underwater landslides, which could release the methane, a powerful greenhouse gas.

Whether that methane would make it to the atmosphere and worsen global warming is unclear, but scientists think that it is unlikely. “We don’t need to worry about any huge blow of methane into the atmosphere,” says Carolyn Ruppel, a geophysicist at the US Geological Survey in Woods Hole, Massachusetts. Rather, she says, Hornbach and his co-author Benjamin Phrampus, also of the Southern Methodist University, have uncovered a powerful new way to use data from the geological record to catch non-anthropogenic climate changes that are already happening.

Using seismic data collected in 1977 to model where they expected the frozen methane to become gaseous in the western North Atlantic margin, they found that the observed interface between the frozen solid and the free gas was much deeper than predicted. After systematically checking every detail, the team ruled out several factors that could have explained their observations — including sea-level changes, increased sedimentation rates or decreased heat flow through the sediments. They eventually realized that the only thing that could cause the discrepancy was that the water was cooler in the past. Phrampus ran the model again using data from much cooler waters 100 kilometres northwest of the Gulf Stream, and got an almost perfect fit.

Next, the authors modelled heat flow through the methane hydrate sediments in relation to time, and estimated that it would take around 5,000 years of warmer waters for all of the methane to sublimate and become gas. “We don’t know where we are in the 5,000-year time frame, but our best approximation suggests we are 800 to 1,000 years in,” says Phrampus.

This work promises to reinvigorate an ongoing debate over the risk of methane release from the oceans and whether destabilized hydrates make the continental slopes more unstable.

“The embarrassing reality is we don’t have any solid confirmation that these connections are causative rather than correlative,” says Charles Paull, a marine geologist at Monterey Bay Aquarium Research Institute in Moss Landing, California, who has studied this western Atlantic region in detail. He says that this latest work provides credible evidence that thermal changes in the oceans can destabilize hydrates.

There are other hydrate deposits around the world that deserve attention. The Arctic is undergoing rapid warming, dramatic loss of sea ice and changing oceanographic conditions. Essentially, says Ruppel, it is the place undergoing the maximum amount of change and therefore the best place to study these dynamics. She is now collaborating with Hornbach to collect more data there. “Ground zero for this research is in the Arctic,” says Hornbach.