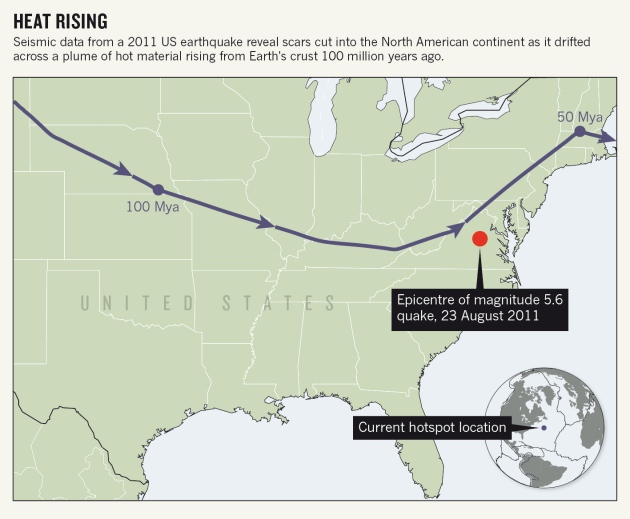 A plume of hot material rising from deep within the earth scarred the underside of the North American tectonic plate as it drifted westward millions of years ago, suggests research published today in Nature Geoscience1. The residual heat still affects seismic waves travelling through the continent, even though the mantle plume is now under the Atlantic Ocean.

When such mantle plumes occur beneath thin oceanic crust, they often punch through and create volcanoes — the Hawaiian Islands are a prime example2. But older, colder and thicker continental crust is not so easily breached, says Risheng Chu, a geophysicist at the Institute of Geodesy and Geophysics in Wuhan, China. The only signs on land of ancient hotspot paths typically are kimberlites — volcanic and sometimes diamond-bearing rocks that mark the site of an ancient, deep-seated eruption.

But Chu and his colleagues inferred the path of a hotspot beneath eastern North America using a different sort of evidence — the speed of seismic waves, which travel more slowly in warmer rock. The data were gathered by dozens of seismometers in the USArray network, most of them along a stretch from Louisiana to Wisconsin, during the magnitude-5.6 quake that jolted central Virginia on 23 August 2011.

Their analysis indicates that seismic waves travelling west from the earthquake’s source in Virginia towards Missouri arrived at seismometers later and with lower intensity than expected. Such vibration-damping behaviour suggests the presence of a broad lane of warm rocks running east to west, about 200 kilometres beneath Kentucky — a depth that roughly coincides with the lower surface of the tectonic plate. Seismic waves travelling north and south of this lane arrived on time or slightly ahead of schedule.

Seismometers northeast of the Virginia quake’s epicentre also detected slow, stifled seismic waves, suggesting another hotspot track in that direction as well. The researchers suggest that the continent moving over the hotspot cut a path that swooped east-southeast from central Missouri (90 million years ago) to eastern Kentucky (some 70 million years ago), arced northeastward to Massachusetts (60 million to 50 million years ago) and then swerved eastward and moved offshore. A kimberlite deposit in eastern Kentucky, dated to about 75 million years ago, bolsters the notion that a hotspot lay below the region during that time, Chu and his colleagues contend.

The evidence supporting the purported hotspot’s path is interesting but circumstantial, says Randel Cox, a geologist at the University of Memphis in Tennessee. “I’m still trying to keep an open mind about this [idea], but there are alternate explanations” for the seismic slowdown beneath Kentucky and the Virginia–Massachusetts corridor, he notes.

For instance, seismic vibrations in the region could be scattered by features deep within or below Earth’s crust, such as a ‘crumple zone’ of rocks where one tectonic plate collided with another. Regardless, he adds, researchers need more data, from more than one earthquake, to produce a thorough subterranean map of the eastern United States.