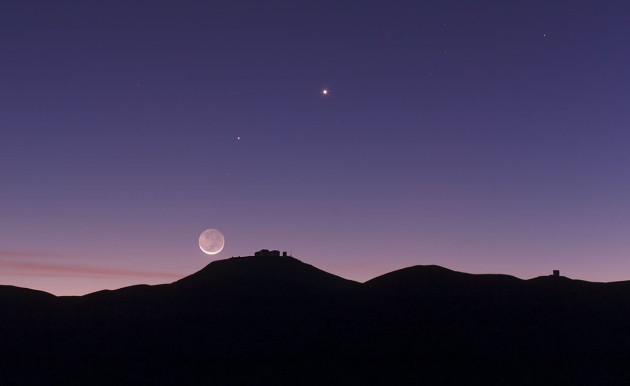 By observing sunlight reflected off of Earth as it would be seen from the Moon, astronomers are devising methods to search for signs of life on exoplanets.

For the first time, researchers have ‘discovered’ signs of life and habitability on Earth using a method that could, in principle, be used to discern similar ‘biosignatures’ on planets in far-distant solar systems. The work is published today in Nature1.

A variety of signs could indicate life on a planet — bright and dark bands in reflected light spectra point to certain combinations of gases in an atmosphere, for instance, and a particularly dark spectral band may suggest the presence of chlorophyll or some other light-harvesting biopigment. These particular biosignatures were readily observed nearly two decades ago by NASA’s Galileo probe as it passed Earth on its way to Jupiter2. But identifying life’s fingerprints on a distant exoplanet, whose dim glimmer is virtually overwhelmed by the glare of its parent star, is a considerable challenge.

Now, researchers have developed an approach that capitalizes on a notable difference between light that is reflected off a planet and light that is emitted by a star: the former is often polarized, whereas the latter is not. To demonstrate the enhanced amounts of information embedded in polarized light, Michael Sterzik, an astronomer at the European Southern Observatory in Santiago, Chile, looked for biosignatures in Earthshine — the sunlight that’s been reflected off of Earth to the dark portion of the Moon’s face and then back to our planet. “The state of polarization contains a lot of information that hasn’t been used very often,” Sterzik says.

Using ESO's Very Large Telescope in Cerro Paranal, the researchers measured the intensity of polarized light at various angles in narrow-wavelength bands, a process dubbed spectropolarimetry, during two nights in 2011 — on 25 April, when from the Moon, Earth would have appeared half-lit, and on 10 June, when about one-third of Earth’s face would have appeared illuminated.

By comparing their measurements with models of how various land and sea surfaces would have reflected polarized light, the researchers found that they could use their data to discern changes in Earth’s cloudiness and to determine that part of the planet is covered with oceans. Beyond these clear signs of habitability, the team identified the biosignature of chlorophyll — which showed up strongly in the April observations, when parts of Brazil, Africa and Europe were illuminated as seen from the Moon, but was almost undetectable in the June data, when hardly any landmasses were lit.

One small step for man

“This is very exciting work,” says Sloane Wiktorowicz, an astronomer at the University of California, Berkeley. The technique is particularly promising, he notes, because scientists have so far been able to determine the atmospheric spectra of only those exoplanets that pass directly between their parent stars and Earth — a mere 10% or so of the exoplanets discovered so far, Wiktorowicz estimates. “This offers a way to study all exoplanets, regardless of whether they transit or not,” he says.

Successfully adding polarimetry to spectral observations “is quite a big deal,” says Christoph Keller, an astrophysicist at Leiden University in the Netherlands who wrote an accompanying News and Views article in Nature3. Nevertheless, he notes, “no one will be able to do this for exoplanets for quite a while”.

Sterzik agrees: “Using this technique [to observe exoplanets] is not within reach with current technology,” he says. For distant — and therefore exceedingly faint — targets, such measurements would require long exposures through much larger telescopes than are now available. Sterzik and his colleagues suggest that the next generation of telescopes — including instruments such as the European Extremely Large Telescope, which will have an aperture nearly 40 metres across and could be operational about a decade from now — could make observations that reveal that Earth is not the only planet hosting life.

In the meantime, says Sterzik, present models describing the degree to which sunlight reflected from various Earth surfaces is polarized “are good but by no means perfect.” So, he suggests, researchers need to make a large number of direct observations of Earth from a great distance — possibly from telescopes on the Moon. Only by making measurements of all faces of Earth during all seasons and with various states of cloudiness can scientists fully characterize how a terrestrial exoplanet similar to Earth might look, he notes.