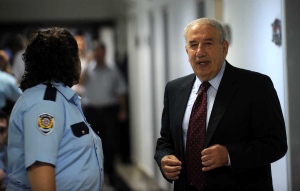 Kemal Gürüz has been detained while police investigate his alleged involvement in the fall of the Turkish government in 1997.

One of Turkey's most prominent academic reformers, Kemal Gürüz, was arrested and jailed yesterday. The move was condemned by human-rights activists and some Turkish scientists, who say that it is part of a systematic intimidation of academics who oppose the growing influence of Islam in the country's politics.

Gürüz is well known as a vociferous defender of secularism in education and science, and this is the second time in three years that he has been arrested. He is a retired chemical engineer and former president of both the Turkish of Higher Education Council (YÖK) and the Turkish science-funding agency TÜBITAK.

The exact charges against Gürüz have not yet been made public, but they are related to the country's long-running ‘28 February investigation’. On that day in 1997, the military gave a series of ultimatums to the Turkish government to reverse political moves that were considered threatening to the country’s constitutional secularism.

The government was forced out later that year, resulting in, among other things, the rigorous application of a ban on the wearing of the Islamic headscarf in universities. The ban has now been relaxed by the mildly Islamic government of Recep Tayyip Erdoğan, which took office in 2003.

The 28 February investigation launched by Erdoğan's government seeks to identify those who may have acted illegally to promote the 1997 ousting of the government, which had been the first to have a pro-Islamic agenda since the creation of the modern Turkish state in 1923. The investigation has already seen the arrest of a large number of people, mostly from the military.

Prosecutors claim that in 1997, while Gürüz was president of YÖK, he helped the military to prepare its ultimatums by providing information about the religious orientation of Turkish university rectors. Celâl Şengör, a geologist at Istanbul Technical University, believes that the charges are trumped up. “Kemal Gürüz valiantly fought against Islamist penetration into the universities, and resisted all attempts at lowering the standards of education in Turkey,” he says. “Now he is being made to pay for this.”

Gürüz told Turkish journalists that he had “done nothing illegal”. Gareth Jenkins, an expert in Turkish policy based in Istanbul, says that he sees no reason for Gürüz to be jailed pending a formal charge, as Gürüz is unlikely to flee or destroy evidence. “The 28 February process is getting out of control,” Jenkins says.

Gürüz was last arrested in 2009, along with at least a dozen other academics, and charged with membership of a purported clandestine antigovernment organization called Ergenekon, whose existence has not been proven but which the current government believes to have  plotted a recent military coup (see 'Rights for all'). That case is still ongoing.

Felton Earls, a social health researcher at Harvard Medical School in Boston and the US representative of the International Human Rights Network of Academies and Scholarly Societies, says that the arrest of Gürüz increases the network's concerns about the "persistent erosion of academic values, free speech, and independent thinking through interrogations, detentions and intimidation of scholars and intellectuals" in Turkey. He says that the network's executive committee "condemns the clearly unjust treatment of this eminent colleague whose honesty and integrity are beyond reproach".

"Given his reputation, age, and health, he should immediately be released," adds Earls, "as should the other unjustly detained academics, until the Turkish judiciary is able to give them a trial that meets internationally-recognized standards for fairness."