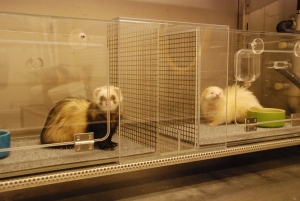 Just a handful of mutations could give H5N1 bird flu the ability to be transmissable in mammals.

The H5N1 ‘bird flu’ virus could evolve to spread through the air between ferrets by picking up as few as five mutations, according to a long-awaited study from Ron Fouchier from the Erasmus Medical Centre in Rotterdam, the Netherlands1. The paper is published today in Science after months of debate about whether the benefits of publishing the research outweighed the risks.

H5N1 can cause lethal infections in humans but it cannot spread effectively from person to person. Fouchier’s paper is the second of two publications describing how the virus could evolve this ability. The first, from Yoshihiro Kawaoka at the University of Wisconsin–Madison, involved a hybrid virus with genes from both H5N1 and the H1N1 strain behind the 2009 pandemic2 (see 'Mutant-flu paper published'). Fouchier’s mutant contains only H5N1 genes.

“Coming after the Kawaoka manuscript, I thought it might be anti-climactic, but it does not fail to deliver,” says Vincent Racaniello, a virologist at Columbia University in New York.

There is only one common mutation in the combinations that Fouchier and Kawaoka identified. “It just means that there are multiple ways to skin a cat,” says Robert Webster, a virologist at St Jude Children’s Research Hospital in Memphis, Tennessee.

Despite their differences, both sets of mutations confer similar properties on H5N1. Some mutations allow the haemagglutinin (HA) protein on the virus’s surface to stick to the kind of receptors found in the human upper airway. Others stabilize the protein, an unexpected property that now seems to be important for transmission among mammals. “Two very different strategies led to common functional changes,” says Malik Peiris, a virologist at the University of Hong Kong, who notes that these changes are “not uncommon in field strains already”.

Fouchier now wants to know whether these traits could make any flu virus go airborne, and whether previous pandemics started in this way. “The virus could evolve in a thousand different ways,” he says. “But if we can show that any receptor-binding mutations, or any that change the stability of HA, can yield airborne viruses, the story becomes completely different. We can then do surveillance for mutations that cause the same phenotype.”

Fouchier’s team began by adding three mutations to an H5N1 strain isolated from Indonesia in 2005. Two of these — Q222L and G224S — changed the HA gene such that its protein preferentially sticks to human-type receptors over those found in bird cells. The third — E627K — changed the PB2 gene, which is involved in copying the virus’ genetic material, so that the virus was able to replicate more easily in the cooler environment of mammalian cells.

The team allowed this mutant virus to evolve naturally by passing it from one ferret to the next, injecting it into the animals' noses and collecting samples daily for four days. After ten rounds, the virus could spread between ferrets housed in separate cages.

These airborne strains spread less effectively than the 2009 H1N1 virus, and are sensitive to current antiviral treatments and potential vaccines. They are lethal if delivered directly to the ferrets’ airways in high doses, but not if the animals catch the infections naturally through the air.

Fouchier’s airborne viruses carried a diverse array of mutations, with just five mutations shared by them all, including the original three that Fouchier had inserted and two more in the HA gene: T156A, which affects receptor binding, and H103Y, which stabilizes the protein. The five mutations might be enough for H5N1 to spread between ferrets, but it may take nine or even more. “Until the changes are introduced in combinations into H5N1 virus, we won’t know the answer,” says Racaniello.

In a related paper published in Science3, Derek Smith from the University of Cambridge, UK, and his colleagues has shown that wild H5N1 viruses already have many of the mutations that Fouchier and Kawaoka identified. Some of the viruses are two to four nucleotide substitutions away from the complete sets. However, whether those mutations would allow different strains of H5N1 to spread between ferrets, let alone humans, remains unclear.

Fouchier now wants to work out the number of other individuals who catch the airborne virus for everyone who is infected. This number “needs to be higher than 1 to cause a pandemic”, he says. “We need more quantitative transmission models to start addressing that.”

But Racaniello thinks a different approach would be more effective. “I suggest that we spend research money developing more flu antivirals, and a universal flu vaccine,” he says,