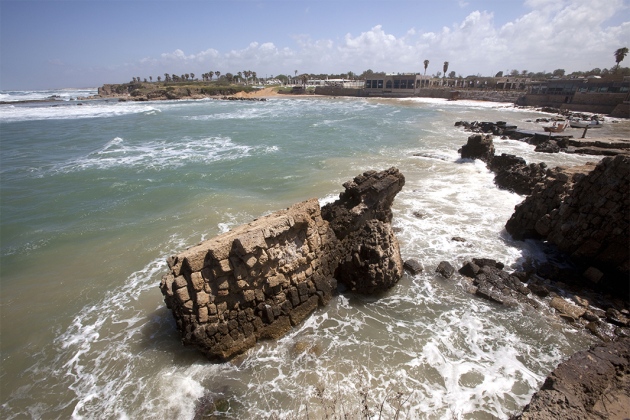 Roman piers and other harbour structures built using an ancient cement mix have lasted for millennia.

Ancient Romans built concrete sea walls that have withstood pounding ocean waves for more than 2,000 years. Now, an international team has discovered a clue to the concrete’s longevity: a rare mineral forms during chemical reactions between the concrete and seawater that strengthen the material.

Structural engineers might be able to use these insights to make stronger, more-sustainable concrete, says team leader Marie Jackson, a geologist at the University of Utah in Salt Lake City. She and her colleagues report their findings on 3 July in American Mineralogist1.

Modern concrete uses a paste of water and Portland cement, a fine powder made mostly of limestone and clay, to hold together small rocks. But it degrades within decades, especially in harsh marine environments. Instead of Portland cement, the Roman concrete used a mix of volcanic ash and lime to bind rock fragments. The Roman scholar Pliny the Elder described underwater concrete structures that become “a single stone mass, impregnable to the waves and every day stronger.” This piqued Jackson’s interest. “For me the question was, how does this material become a rock?” she says.

In earlier work, Jackson and colleagues reported some of the unusual chemistry of Roman concrete, such as the presence of a rare mineral known as aluminium tobermorite2. For the new study, the scientists took samples of Roman harbour concrete to the Advanced Light Source, an X-ray synchrotron at Lawrence Berkeley National Laboratory in Berkeley, California, and mapped out the location of minerals in the samples.

The researchers found a silicate mineral called phillipsite, which is common in volcanic rocks, with crystals of aluminium tobermorite growing from it. Tobermorite seems to have grown from the phillipsite when seawater washed through the concrete, turning it more alkaline. “It's a very rare occurrence in the Earth,” Jackson says. Such crystallization has only been seen in places such as the Surtsey volcano in Iceland. As tobermorite grows, it may strengthen the concrete because its long, plate-like crystals allow the material to flex rather than shatter when stressed. 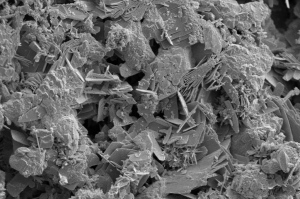 A scanning electron microscope image of minerals within Roman concrete.

Modern concrete-makers could learn from the ancient Romans’ knowledge, says Nele De Belie, a materials engineer at Ghent University in Belgium. She and her colleagues have used materials such as fly ash, produced during the burning of coal, to give concrete ‘self-healing’ properties, whereby the material closes up cracks after they form3. Fly ash is similar to the volcanic ash that Romans used in their mix.

Jackson has been working to recreate the Romans’ concrete recipe in the lab. She is also a consultant for a cement company in Nevada that is using volcanic ash from the western United States to formulate such concrete.

“I’m not saying this would be the concrete that would be used in everyday infrastucture,” she says. “But for materials like sea walls, we could formulate mixtures with lime and volcanic ash materials in the way that the Romans did.” The Romans may have got their ideas from studying how ash from volcanic eruptions crystallized into durable rock, Jackson says.