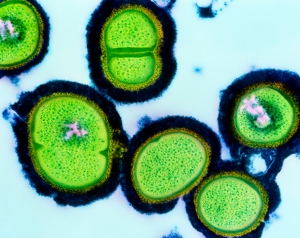 Methicillin-resistant Staphylococcus aureus bacteria pass genes down through generations and out to other strains.

Researchers have identified a gene that makes some strains of an antibiotic-resistant bacterium more virulent, and have found that the gene is becoming more prevalent.

Epidemics of infection with methicillin-resistant Staphylococcus aureus (MRSA) come in waves. To uncover the molecular basis of MRSA’s virulence, Michael Otto, a molecular microbiologist at the US National Institute of Allergy and Infectious Diseases in Bethesda, Maryland, and his colleagues focused on a rare genetic element within a strain of MRSA, ST239, that is predominant in Asia.

When the researchers ascertained that the gene, sasX, encodes a protein anchored on the surface of S. aureus, they suspected that they had found something that might enhance the bug’s infectious prowess. Sure enough, strains with sasX clung more tightly to the nasal linings of mice than did otherwise identical bacteria that lacked sasX. In addition to respiratory infections, S. aureus can also cause boil- and rash-producing skin infections. In these types of infections, sasX was a problem as well, leading to larger lesions in mice than strains without the gene. The results are published today in Nature Medicine1.

One reason for such virulence, suggest the authors, is that sasX-carrying bacteria aggregate tightly. “Our idea is that when they stick together, it is more difficult for a white blood cell to ingest the bacteria and kill them,” says Otto.

In addition, the authors discovered that sasX is spreading to other strains. In S. aureus samples collected between 2003 and 2005, 95% of those found to carry the gene were from the ST239 strain. In samples collected from 2009 to 2011, however, that number had dropped to 72%. Like many genes that confer advantages to bacteria, sasX can jump from one strain to another, in addition to being passed down through the generations.

Although sasX seems to be more prevalent in Asia than elsewhere, researchers say that the gene warrants worldwide attention. “We haven’t found it in many other places, but we haven’t looked that thoroughly,” Otto says. “There’s certainly a danger because we know these strains are spreading.”

“Like every good research paper, this raises many more additional questions,” says James Musser, head of the department of pathology and genomic medicine at Methodist Hospital in Houston, Texas. Sometimes, one ability comes at the expense of another, and Musser says that if sasX impairs other functions of MRSA, these strains might remain a problem in hospitals but not afflict healthy individuals who are better able to fight off infections. Alternatively, the gene might not exhibit the same virulence in different MRSA types. “We can’t experimentally infect humans and find out what the answer is, so we’ll have to take the wait and see approach,” he says. “From a monitoring standpoint, we need to be on our toes.”

Characterizing the most virulent versions of MRSA may help researchers to battle the bug. Staph vaccines have eluded science thus far, but the scope of the problem is large enough to warrant one. In 2005, the estimated 18,650 deaths from MRSA in the United States exceeded those from AIDS2.

“The holy grail is to identify a gene that confers virulence and to develop a vaccine against it,” says Frank Lowy, an infectious-disease physician at Columbia University Medical Center in New York. “So far they haven’t been successful in that approach, so now the idea is to combine different proteins associated with virulence into a single vaccine,” he says. “SasX presents another good target.”