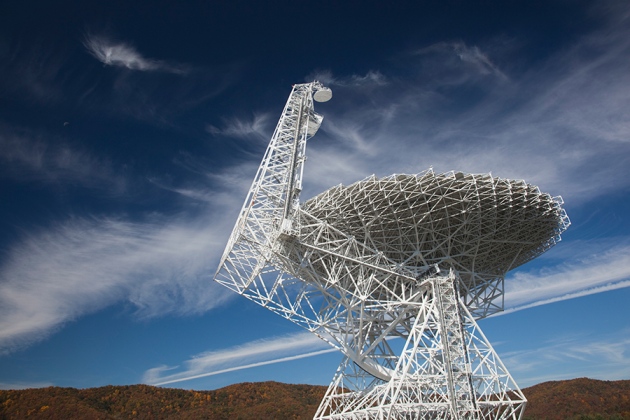 The Green Bank Telescope at the National Radio Astronomy Observatory in West Virginia: one of three telescopes being used in a decadal, $100-million search for extraterrestrial life.

You could say that the silence has been deafening. Since its beginnings more than half a century ago, the dedicated search for extraterrestrial intelligence (SETI) has failed to detect the presence of alien civilizations. But at London’s Royal Society today (20 July), Russian billionaire Yuri Milner announced a shot in the arm for SETI: a US$100-million decadal project to provide the most comprehensive hunt for alien communications so far.

The initiative, called Breakthrough Listen, will see radio telescopes at Green Bank in West Virginia, the Parkes Observatory in Australia, and the Lick Observatory's optical telescope in San Jose, California, scanning around one million stars in the Milky Way and a hundred nearby galaxies. Milner is also releasing an open letter backing the idea of an intensified search; it has been co-signed by numerous scientists, including physicist Stephen Hawking. “In an infinite Universe, there must be other life,” Hawking told luminaries at today's launch event. “There is no bigger question. It is time to commit to finding the answer,” he said.

“We would typically get 24–36 hours on a telescope per year, but now we’ll have thousands of hours per year on the best instruments,” says one of the project leaders, Andrew Siemion, a SETI scientist at the University of California, Berkeley. “It’s difficult to overstate how big this is. It’s a revolution.”

SETI projects traditionally search for radio or optical signals that seem to be from an artificial source, for instance because they are focused in frequency and repeat in a regular manner. But funding has been patchy: in the early 1990s, NASA sponsored some searches, but dropped that support in 1993. “In recent years, the total worldwide support for SETI was about half a million dollars, mostly in the United States, and all from private gifts,” says Frank Drake, one of the pioneers of modern SETI, who is also on the Breakthrough Listen team. “Now we’re getting $100 million, so that’s real progress.”

Milner, who is bankrolling the project, made his fortune through investments in Facebook and other Internet businesses, and in 2012 established lucrative ‘Breakthrough’ prizes to reward excellence in the life sciences, fundamental physics, and mathematics. A particle-physics graduate, he jokes that his interest in SETI began in 1961, the year of his birth; he was named after Russian cosmonaut Yuri Gagarin, instilling a life-long fascination with space and the possibility of alien life.

Paul Davies, a cosmologist and long-term supporter of SETI at Arizona State University in Tempe, who is not involved with Breakthrough Listen, says that he is “thrilled” by Milner's initiative: “It's fantastic that there still exist individuals who are not just rich but who have a cosmic vision that the whole of humanity can get behind,” he says.

The small SETI community will be inundated with a torrent of data — potentially as much in a day as earlier SETI projects collected in a year, Milner estimates. The data will be publicly available, to allow enthusiasts to join the search; Breakthrough Listen will also partner with the established SETI@home project that connects people’s home computers and uses them to crunch data. “The results belong to everyone equally,” says Milner, adding that transparency is particularly important in a project searching for aliens because “there are so many conspiracy theorists”. He also plans a Breakthrough Message competition — offering a $1-million pool of prize money — to construct a digital message to transmit to potential extraterrestrials (though there is no commitment to sending out the message).

Drake argues that Breakthrough Listen will have a positive impact on the wider astronomy community. The investment has saved the relatively old Green Bank and Parkes telescopes from the threat of closure, he says, as governments divert funds to larger-scale, higher-resolution projects such as the Square Kilometre Array (SKA). And the sky survey might discover more pulsars, and help to home in on the origin of mysterious “fast radio bursts” — pulses lasting only a few milliseconds.

Karen O'Neil, director of the Green Bank site, says the "fantastic collaboration", which will see the project underwriting 20% of the telescope's costs in return for 20% of its operating time, has been a lifeline. "It goes a long way to helping us, although it doesn't completely solve the problem," she says. "If we weren't concerned about overall funding it would be a difficult question for us whether this is the right path forward in order to allow people guaranteed time on the telescope. But we do need this and there's the real possibility that through this funding we'll be able to keep the telescope open at least partway for astronomers to keep using it." O'Neil is working with the US National Science Foundation to find other sources of funding to keep the telescope open. 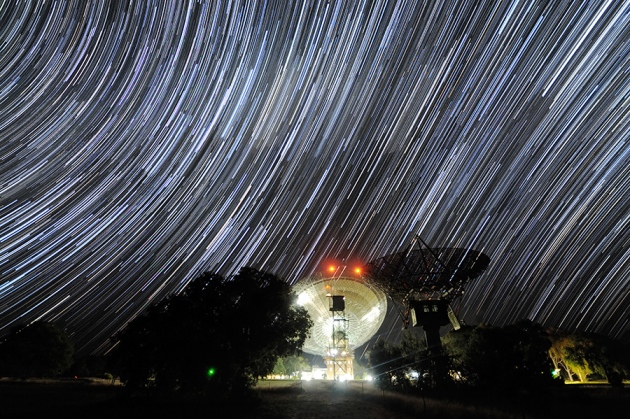 Star trails over Parkes Observatory in New South Wales, Australia; another telescope that will be used in the Breakthrough Listen project.

Breakthrough Listen has not finalized its search strategy, but one of the project’s first tasks will be to fully scan stars for signals in the frequency band between about 1 gigahertz (GHz) and 10 GHz (including the region known as the water hole, because it includes frequencies at which H and OH emit radio waves). The band has been identified in the past as a good channel for deliberate alien communication because signals can travel through interstellar space and Earth’s atmosphere without much interference. “Previously we’ve only been able to hunt and peck at it, now we’ll search that entire spectrum comprehensively,” says Siemion.

Davies suggests that the investment is a good time to rethink the conventional SETI strategy of moving a telescope from star to star, watching each for only a short time. That might not work, he says, because it would require a distant civilization to be sending a constant electromagnetic signal specifically to Earth, when aliens — if they exist — are more likely to be sending a ‘lighthouse beacon’ that sweeps around the sky. "I think SETI needs to revise its strategy and point its telescope towards the centre of the Galaxy for many years to maximize the chance of picking up such a transient signal," he says.

“It’s quite likely that we won’t find anything,” Milner concedes, adding that a negative result would allow astronomers to put some limits on what is out there. “But in 10 years’ time, there will be even more advances and we can work out the best strategy for the next 10 years of the project, and then maybe the next 10 after that,” he says.