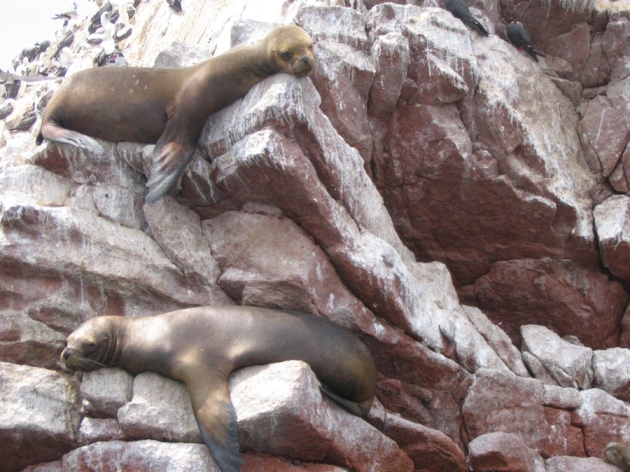 Infection from marine mammals could explain how tuberculosis spread to people living in Peru at a time when the Americas were already geographically isolated.

Modern TB strains found in North and South America are closely related to strains from Europe, suggesting that the Spaniards introduced the disease to the New World when they colonized South America in the sixteenth century.

Beginning in the 1950s, however, palaeoanthropological studies found evidence of lesions associated with TB in pre-Columbian skeletons in South America. This suggested that a member of the Mycobacterium tuberculosis complex, the group of related bacterial species responsible for the disease, was present on the continent before European contact.

In a study published today in Nature1, a team led by palaeogeneticist Johannes Krause at the University of Tübingen in Germany provides DNA evidence for this theory. The researchers present three 1,000-year-old M. tuberculosis genomes extracted from human skeletons found in Peru.

“We wanted to reconstruct the genome of those ancient M. tuberculosis to obtain a sort of molecular fossil,” explains Krause. “Pathogens don’t leave fossils, but they do leave their DNA in the skeleton, teeth and bones of the victims of the disease.” Having sequenced the three genomes, the researchers set out to understand how these ancient TB strains were related to modern ones.

The general opinion in recent years has been that TB emerged about 70,000 years ago, and that modern humans first acquired it before leaving Africa2. These dates were worked out by measuring how much all known strains of TB bacteria differ from each other, and then using the rate at which genetic differences accumulate — a 'molecular clock' — to work out how much time was needed for all that diversity to evolve.

Krause and his colleagues did their own molecular-clock calculation, basing the rate of TB evolution on the differences between modern strains and the 1,000-year-old Peruvian ones. Their results suggest that the most recent common ancestor (MRCA) of all strains of M. tuberculosis evolved less than 6,000 years ago.

“This is a landmark paper that challenges our previous ideas about the origins of tuberculosis, not just in the Americas but in the Old World too,” says Terry Brown, a biomolecular archaeologist at the University of Manchester, UK. The date is so recent that it “suggests that previous estimates for the MRCA were wildly incorrect”, he says. However, he adds, more Mycobacterium genome sequences, and from different time periods, will be needed to confirm this result.

If these findings are correct and M. tuberculosis is less than 6,000 years old, they pose another conundrum. The microbe must have reached the Americas before Europeans arrived, but after the land bridge between North America and Asia disappeared around 11,000 years ago, Krause notes. “How did it get to America, say, from Asia, if there was no longer a land bridge?”

In the search for answers, the researchers decided to look at the genetics of 40 different strains of tuberculosis that infect animals. They found that the ancient strains from Peru were not like human-adapted forms, but were very similar to forms called Mycobacterium pinnipedii, which are adapted to seals and sea lions.

Mycobacterium pinnipedii has been transmitted from seals to humans in zoos. Brown notes that in the past archaeologists have speculated that this might have been a source of TB infection in coastal areas of South America, where seals were hunted.

Tom Gilbert, an evolutionary biologist at the University of Copenhagen, says that the seal-transfer idea is certainly attractive, but he is cautious about the paper’s conclusion. “What’s more likely — that marine mammals gave rise to tuberculosis in humans in South America, or that we simply haven’t sampled enough relevant terrestrial hosts on the continent to spot the true ancestor?”

Krause agrees that because this ancient strain does not exist in people today, we cannot say for sure that it was adapted to its new host, meaning that it became transmissible from human to human. “To nail this hypothesis we would have to find tuberculosis in North America and in inland populations in South America.”