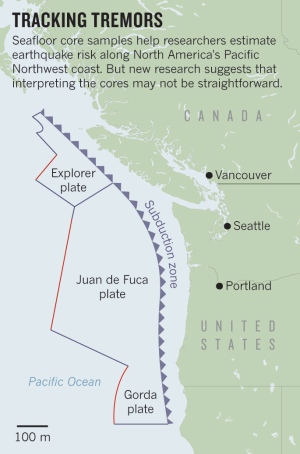 Scientists have long warned that a chunk of North America's northwest coast is overdue for a devastating megaquake. But a new analysis suggests that the region may see slightly less destructive, but more frequent, upheavals1.

Most seismic activity in the Pacific Northwest centres on the Cascadia fault, where the Juan de Fuca tectonic plate is being slowly crushed under the North American continental plate (see diagram). This occasionally shoves the continent upwards along the whole length of the fault in a ‘megathrust quake’. It also triggers underwater landslides that cascade through sea-floor canyons.

One 2012 report2 suggested that the risk of a major quake in the region was larger than previously suspected. Researchers analysed sediment cores drilled in seabed canyons on the continental slope. Layers of landslide deposits, or turbidites, preserved in cores from several canyons could be matched, indicating past megathrust quakes that shook the entire fault line at about magnitude 9.

The team found 19 such full-length ruptures since the end of the most recent ice age 10,000 years ago, meaning that the region had experienced a major seismic event every 500 years, on average. Less powerful, but still dangerous, magnitude-8 quakes confined to the southern segment of the fault — off the US state of Oregon — occurred roughly every 240 years. Overall, the team concluded, the Cascadia region had roughly a 40% chance of a major earthquake in the next 50 years.

But when Brian Atwater, a geologist at the US Geological Survey (USGS) in Seattle, Washington, and his colleagues examined an existing set of cores, some drilled in the mid-1960s, they made a surprising discovery: many of the samples taken near the northern segment of the fault had far fewer turbidites than those in southern canyons1. This makes it harder to determine how many earthquakes actually struck off northern Washington. Several quakes that were thought to have ruptured the entire fault could have been confined to just the southern segment, the study suggests.

The rate of past earthquakes is used in hazard assessments and informs regulations like building codes. “There’s a lot riding on correctly interpreting these data,” says John Vidale, a geophysicist at the University of Washington in Seattle, who was not part of this study.

Atwater says that his findings reinforce the idea that big quakes occur in the Pacific Northwest — but raise doubts about how well researchers understand past seismic activity. Some of the discrepancy between the 2012 study and the latest work may arise because the 2012 study relied on samples drilled farther downstream in the region’s sea-floor canyons. Atwater and his colleagues have identified areas where landslides may have transported debris from a quake-induced landslide between canyons, making it harder to interpret the layers preserved in sediment cores.

The scarcity of turbidites in the northern samples could be caused by a lack of sediment along the sea floor in the northern reaches of the fault zone. If that is true, large quakes may have struck without triggering landslides that left evidence on the seabed, says study co-author Gary Griggs, a geologist at the University of California, Santa Cruz.

Chris Goldfinger, a marine geologist at Oregon State University in Corvallis who led the 2012 study, believes his team's earthquake history is accurate. He says that the older cores, drilled in a pre-GPS era, may have missed the narrow path of debris along each canyon's bottom. His team has also analyzed the terrain of the proposed spillover paths, and found no evidence of landslides since the end of the last ice age, which he thinks rules out the possibility of movement between canyons.

Goldfinger adds that he is taking samples from lake-beds in Washington to further explore the frequency of megaquakes, and a preliminary analysis suggests that his original projections are correct.

But Robert Witter, a geologist with the USGS in Anchorage, Alaska, who is not involved with either study, thinks that the debate over the region's quake risk is still open. “I believe Brian raises many good points and I believe he’s done careful work,” he says. “This is what science is all about.”