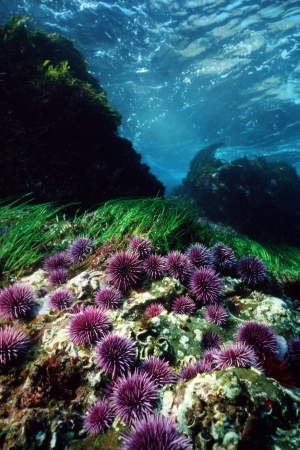 Rising acidity in the oceans is expected to have dire consequences for organisms like coral, but some sea urchins have the genetic tools to adapt to the inhospitable conditions, researchers have found. The result, presented Monday at the Third International Symposium on the Ocean in a High CO2 World in Monterey, California, is one of a few suggesting that some organisms are more resilient than others to changes in ocean acidity.

As atmospheric carbon dioxide rises, oceans will absorb the gas, and their pH will drop. Corals and plankton will have trouble maintaining their calcium carbonate skeletons in more acidic waters because there is less carbonate available in low pH waters. But it’s unclear how other organisms will respond over time.

“The big question is whether species will be able to adapt to future levels of ocean acidification,” Gretchen Hofmann, an evolutionary biologist at University of California, Santa Barbara, told the conference.

Hofmann and her colleagues found that Purple sea urchins (Strongylocentrotus purpuratus) have the potential to adapt to changes in pH. “Purple urchin larvae are resilient in the face of ocean acidification because of the standing genetic variation that exists in the population,” she said.

Stephen Palumbi, a marine biologist at Stanford University in California who also presented reasearch at the conference, says, with these findings, ocean acidification research has reached an important turning point. “A stunning moment in AIDS research was when it was discovered that some people were virtually immune to contracting HIV,” he says. “Similarly, we are finding genes or gene combinations that make organisms less susceptible to acidification.”

For their latest research, Hofmann and her colleagues took advantage of the natural variability in coastal pH in the eastern Pacific Ocean to study how organisms will respond to more acidic conditions. Sites in central Oregon, for example, can drop from a pH of 8.1 to 7.6 during periods of ‘upwelling’, in which wind drives acidic waters high in carbon dioxide to the surface. “A pH of 7.6 is not expected elsewhere until the year 2100,” said Tyler Evans, a postdoctoral researcher in Hofmann’s laboratory, at the conference.

Evans collected adult urchins from Fogarty Creek, a low-pH site in Oregon, bred the adults and raised the progeny under normal (400 microatmospheres) and upwelled (800 microatmospheres) carbon dioxide conditions. He then looked at gene expression in the populations and found that the 150 genes that were turned on in the low pH population were largely related to calcium transport. “These genes help to promote calcification in acidic oceans,” he said.

The genes affected in the coral Acropora millepora under acidifying conditions are different1. “We see genes involved in calcium transport upregulated in sea urchins, but we don’t see that in corals — which may be a big part of why the two systems react so differently,” said Evans.

The researchers are now focusing on the costs of increased pH tolerance. “We see genetic signatures that suggest trade-offs may occur with respect to energy expenditure and protein damage,” says Evans.

Other species have genetic variability that could help them to cope with acidic oceans. Palumbi presented evidence of massive genetic variation in red abalone (Haliotis rufescens). His team found more than 1 million genetic variants in 19,000 expressed genes in locations of varying pH along the North American West Coast.

Researchers do not know which other species can adapt to acidification, or what the limits of this ability are. “Even with this capacity to adapt,” says Hofmann. “How much is too much?”