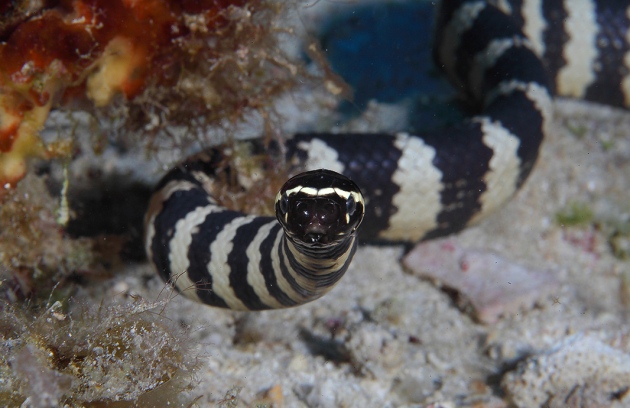 The melanin pigment in the turtle-headed sea snake's dark bands binds to pollutants.

Sea snakes that live in polluted waters have evolved to ‘fill in’ their light stripes, darkening their skins to cope with pollution.

The finding1 adds turtle-headed sea snakes (Emydocephalus annulatus) to the diverse list of creatures that exhibit ‘industrial melanism’, when darker animal varieties become dominant in polluted environments. The phenomenon is a classic example of natural selection, and one of the best-known cases — the spread of the dark version of the peppered moth in sooty nineteenth-century Britain — is often quoted in biology textbooks.

For decades, evolutionary ecologist Rick Shine has snorkelled in the bays of Nouméa in the South Pacific island of New Caledonia to study the sea snake species and collect their shed skins.

Over the years, while studying the snakes in the Indo–Pacific, he noticed something curious: in some populations, most snakes were jet black, whereas in others, most sported pale banding or blotchy white markings.

In 2014, Claire Goiran, a marine biologist at the University of New Caledonia in Nouméa who sometimes helped Shine to collect sea snakes, came across a study about Parisian pigeons2. The research had found that the birds' darker feathers store more zinc and other elements indicative of pollution than do lighter feathers, because the elements bind with the pigment melanin. It suggested that 'melanic', or dark-coloured, plumage or coats could be a selective advantage for animals living in polluted areas because the animals can rid themselves of harmful chemicals faster.

So Goiran and Shine, who is based at the University of Sydney in Australia, collaborated to see whether the same went for sea snakes. Some parts of the Nouméa lagoon are polluted by run-off from nearby mining activities, they note. Their work is published on 10 August in Current Biology1.

The researchers compared the colours of 1,400 turtle-headed sea snake specimens that Shine had collected over 13 years from both industrial and non-industrial sites in New Caledonia and Australia. The black variety was most common in industrial populations, they found, whereas only a few lived in non-industrial areas.

Sea snakes with black colouring (left) are more common in polluted areas, whereas the black-and-white banded variety tends to live in cleaner waters.

What’s more, in banded snakes, the black rings stored more pollutants than did white rings, showing that melanin is likely to be responsible for retaining the contaminants. The researchers found the same to be true for a similar banded sea snake species called sea kraits (Laticauda saintgironsi and Laticauda aggregate), which live in more pristine bays in Nouméa. The snakes might ingest pollutants in sediments when they feed on fish eggs on the sea floor, says Goiran.

Black snakes also sloughed their skins more often, the researchers found. “If shedding is a mechanism for getting rid of pollutants then it may actually be an advantage,” Shine says.

“I have no problems in accepting that the dark areas in the skin have a higher concentration of pollution,” says Arne Rasmussen, a herpetologist at the Schools of Architecture, Design and Conservation at the Royal Danish Academy of Fine Arts in Copenhagen. But the conclusion that more snakes with dark skin live in polluted areas because of the pollution might go too far, he says. Other factors, including temperature, could explain the distribution of black versus banded snakes, Rasmussen says. Previous research has found darker coloured snakes tend to live in cooler areas.

Shine says he knows those studies and has conducted one himself. The connection makes sense for land snakes, he says, which would benefit from having a heat-absorbing dark skin — but the colour advantage doesn’t apply to their aquatic cousins3. For them, water acts as an insulator to keep both banded and black snakes warm.

Anecdotally, Rasmussen says he has seen both black and banded sea snakes living in areas that are more polluted than Nouméa. But “if you could use a sea snake to indicate how much pollution there is in an area, that would be great”.

That doesn’t address the fact that the snakes had to adapt to pollution in the first place, says Shine. Although shedding might be advantageous, there are limits to how much it can protect a population, he adds.

Still, “it’s an encouraging story in terms of rapid evolution”, he says. “Here is yet another avenue in which organisms are able to deal with some of the problems that we’ve raised.”