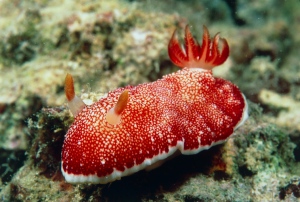 The sea slug Chromodoris reticulata sheds and regrows its penis between matings.

The astounding warning colours of the nudibranchs, a diverse group of sea slugs, are certainly enough to attract attention — but even they pale in comparison to the gripping news that one species of the soft-bodied molluscs has a habit of discarding its penis.

Nudibranchs are hermaphrodites, meaning that they carry both male and female reproductive organs. Moreover, when they mate, they can perform the male role of donating sperm and the female role of receiving sperm at the same time. This process involves two penises and two vagina-like organs, and sperm transmission effectively happens simultaneously during the encounter.

This is a relatively standard arrangement among nudibranchs, so the creatures' sexual organs might all be expected to look roughly the same. But the animals show incredible sex-organ diversity, and it was during an exploration of this diversity in the species Chromodoris reticulata that researchers made their jaw-dropping discovery.

A Japanese team led by Ayami Sekizawa at Osaka City University and Yasuhiro Nakashima at Nihon University in Tokyo went scuba diving off the coast of Okinawa to collect the sea slugs. They then placed the creatures in aquaria in pairs. In some cases both members of a pair had been isolated from others for 24 hours; in other cases a recently-mated animal was placed with one that had been in isolation.

In total, the team observed 108 pairings, and noticed that individuals that had recently donated sperm seemed to be incapable of doing so again for at least 24 hours. When the researchers looked into this more closely, they noticed that the animals unplugged their penises from their partners and crawled away with their penises dragging along beside them: about 20 minutes later, the slugs discarded their penises. The authors realized that the nudibranchs were not donating sperm again within the 24-hour period because they did not have the necessary anatomy with which to do so.

Examination of the sea slug's penis and its associated sexual organs revealed a tightly coiled spiral structure inside animals that had not recently mated. Animals that had recently discarded their penises lacked this structure. “We think this spiral is effectively a penis-in-waiting that will uncoil rapidly after penis disposal and grown into a new penis,” explains Sekizawa. His team's results appear in Biology Letters1.

As to why C. reticulata evolved disposable penises, Sekizawa speculates that disposal might form part of a process to remove rival sperm from the mate’s vagina, because the penises bear tiny spines, and spines at the penis tip are often coated with sperm upon removal from a sexual partner.

Nils Anthes, an evolutionary ecologist at the University of Tübingen in Germany who was not involved with the study, agrees. “If genetic work confirms that the penis spines are really loaded with rival sperm after retraction, then it is best for the animals to dispose of the penis like a dirty syringe. Otherwise they may risk delivering some rival sperm mixed with their own during later sexual encounters,” Anthes explains.