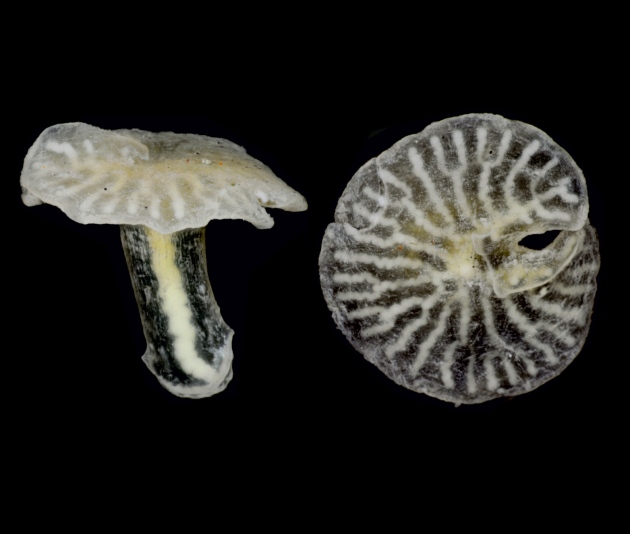 Dendrogramma enigmatica is neither jellyfish nor comb jelly.

Scientists have identified two mushroom-shaped marine animals that do not fit in any of the known categories of the tree of life and could be related to groups thought to be extinct for 500 million years.

Jean Just, a zoologist at the Natural History Museum of Denmark in Copenhagen, discovered 18 odd-looking invertebrate specimens while sorting through materials he had collected in the Tasman Sea in 1986. On that expedition, he was exploring the continental slope off the southeastern coast of Australia using a sled that drags over the bottom of the ocean floor and collects animals that live there.

In the study, which appears in PLOS ONE1, the researchers report 14 specimens, collected at depths of 400 and 1,000 metres, that could not be classified into any major groups, or phyla. These “little, funny, mushroom-shaped animals,” as Just calls them, are multicellular, mostly asymmetrical — a crucial characteristic for classifying organisms — and have a gelatinous layer between the inner and the outer body.

The researchers classified the organisms under a new genus, Dendrogramma — a reference to dendrograms, the tree diagrams used in biology to illustrate evolutionary relationships between organisms. The two species names, enigmatica and discoides, allude to their mysterious character and disc shape, respectively.

The samples were initially fixed in formaldehyde and brought back to the laboratory, where they were stored for a time in alcohol, precluding the possibility of later DNA extraction and analysis to determine their relationships to other organisms.

Under a microscope the samples showed morphological similarities to two existing groups, jellyfish and comb jellies. This suggests that they may be related to one of these groups, although at the moment they cannot be classified as either.

“It would be incredibly exciting if the authors have found a previously unknown group of animals that diverged from other animals so early,” says Casey Dunn, an evolutionary biologist at Brown University in Providence, Rhode Island.

The researchers also found similarities — such as the same branching pattern and lobe-like structures around the mouth opening — between Dendrogramma and a small group of 'medusoids', or jellyfish-like creatures, that lived 600 million years ago during the Ediacaran period.

Tetyana Nosenko, an evolutionary biologist at Ludwig Maximilian University in Munich, Germany, says that “this discovery implies an exciting possibility that the deep-sea of Australia has preserved living descendants of the Ediacara organisms, which were thought to be extinct over 500 million years ago.”

New species are discovered all the time — the 1984 Australian expedition alone yielded somewhere between 200 and 300. But finding one that does not fit within the known tree of life has happened only two or three times in the past 15–20 years, says Just.

“Tracking down a new lineage is like the discovery of a treasure,” says Andreas Hejnol, a developmental biologist at the Sars International Centre for Marine Molecular Biology in Bergen, Norway. Animal lineages that outlasted ancient mass extinction events carry important information that helps researchers to reconstruct the course of evolution, he says.

Just says, laughing, that everyone asks him why it took so many years to classify the animals. “Once you think you have something really extraordinary, it takes a long time to study, read, consult left, right and centre, and convince yourself that you’ve really stumbled across something special,” he says.

Dunn adds that it should now be a priority to acquire new specimens for anatomical and genetic analyses. But Hejnol thinks that some DNA could be recovered from the existing samples, through technology that has enabled researchers to sequence Neanderthal genomes, for example. “I have not doubt that the genetic information is still there,” he says.

An earlier version of this article quoted Andreas Hejnol as saying that finding a lineage that does not fit within the known tree of life has happened only two or three times in the past 15–20 years. The statement belonged to Jean Just.