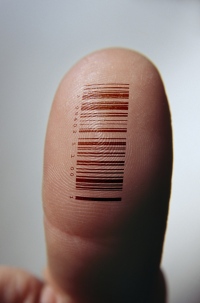 Don’t worry, the tattoo is optional.

In 2011, Y. Wang was the world’s most prolific author of scientific publications, with 3,926 to their name — a rate of more than 10 per day. Never heard of them? That’s because they are a mixture of many different Y. Wangs, each indistinguishable in the scholarly record.

The list of the world’s top 100 authors, all of whom show similarly impressive production rates, is a who’s who of conflated Zhangs, Lis, Chens, Lees and other Wangs. But this confusing problem could be solved following the launch later this year of the Open Researcher and Contributor ID (ORCID), an identifier system that will distinguish between authors who share the same name.

Just as barcodes at the supermarket allow the till to distinguish a tomato from a turnip, ORCID aims to reliably attribute research outputs to their true author by assigning every scientist on the planet a machine-readable, 16-digit unique digital identifier. If ORCID takes off, it could revolutionize research management, vastly increase the precision and breadth of scientific metrics and help in developing new analyses of, for example, social networks. “I’m excited,” says biologist and bibliometrics researcher Carl Bergstrom of the University of Washington in Seattle, who notes that resolving ambiguities over author names is a major challenge. “Solving this problem broadly is a big deal in the science of science.”

Instead of filling out personal details on countless electronic forms associated with submitting papers or applying for grants, a researcher could also simply type in his or her ORCID number. Various fields would be completed automatically by pulling in data from other authorized sources, such as databases of papers, citations, grants and contact details. ORCID does not intend to offer such services itself; the idea is that other organizations will use the open-access ORCID database to build their own services.

So far, some 280 organizations, including major research bodies, funding agencies and publishers, have become members of the ORCID committee, which was set up in 2010 as an independent non-profit organization in Wilmington, Delaware. (Nature Publishing Group is a member, and has a seat on ORCID’s board of directors.) US federal research agencies, such as the National Institutes of Health and the National Science Foundation, are in discussions to integrate ORCID with a planned identifier scheme called the Science Experts Network Curriculum Vitae (SciENcv), which will automatically create CV-like profiles of agency scientists. These would be used to populate and update staff directories and websites, and to generate science metrics. They could, for example, track the publications or patents that have resulted from grants, or check for duplicate funding.

Experts in data-mining and bibliometrics say that they are most excited by ORCID’s potential to link together multiple systems for tracking research, creating a researcher-centric view of science that should enable analysis of scientists’ networks and information associated with them. “In my line of work, proper author identification is a conditio sine qua non,” says Johan Bollen of Indiana University in Bloomington. Bergstrom, too, says that he is particularly enthusiastic about the options it would open up for studying the research trajectories of individual scholars “at a big-data scale” — exploring how their research interests, collaboration patterns and publication trends change over time.

Herbert Van de Sompel at the Research Library of the Los Alamos National Laboratory in New Mexico, who is a long-standing proponent of author identifiers, hopes that the system might be used to generate alternative metrics by linking authors to their outputs in “less traditional venues of scholarly communication, such as tweets, blog posts, presentations on Slideshare and videos on SciTV”.

For ORCID’s promise to be realized, however, it must become the accepted standard for all players in research, from funding agencies and universities to publishers and database operators. Expanding membership will require better community outreach, according to a report that ORCID commissioned from Deanna Marcum, managing director of Ithaka S&R, a non-profit research consultancy in New York. At an ORCID outreach meeting in Cambridge, Massachusetts, last week, Marcum presented survey data suggesting that many research institutions do not understand the practical applications of ORCID, and that many academics have never heard of it.

“We need to do a better job of communicating to universities and research agencies why ORCID is important to them,” says Laure Haak, who was appointed executive director of ORCID in April. When the scheme opens for business in the coming months, it will at first rely on large publishers and research agencies to build a critical mass of registrants, because they can require researchers to provide or register for an ORCID number in order to publish a paper or submit a grant proposal.

Individual researchers will be able to get an ORCID number for free as of later this year, whereas universities, companies and other organizations will pay tiered-subscription charges. So far, the scheme has been sustained by members working in kind, as well as by donations of US$574,000 and loans of $1.2 million. Once membership fees begin flowing, they are expected to raise $2.5 million each year.

Haak is convinced that when scientists and their patrons see the practical benefits of ORCID, it will become the de facto standard author identifier in research, much as the digital object identifier (DOI) has become for papers and data.