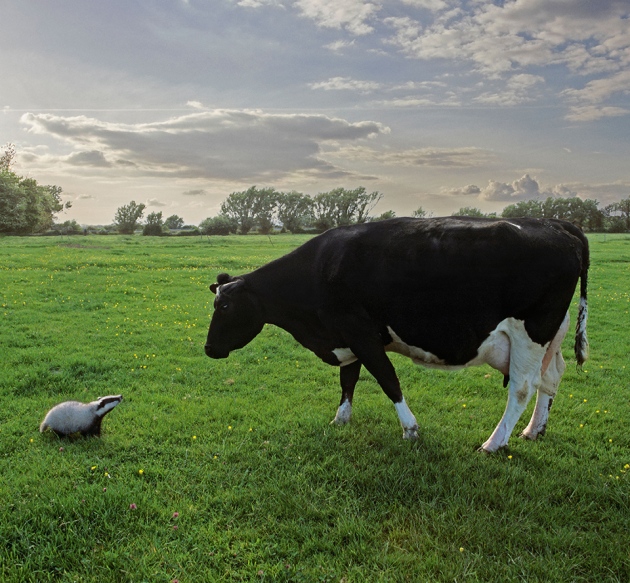 Badgers and cows are scattered across the English countryside, yet the two species rarely meet face-to-face, a large study has revealed1. The finding is not merely incidental. It sheds light on how badgers transmit bovine tuberculosis (TB) to cows: a question which UK researchers have spent more than a decade studying.

Since 2013, the UK's government has sanctioned the killing of hundreds of badgers (Meles meles) in controversial culls to try to dampen the spread of bovine TB. The disease, caused by the bacterium Mycobacterium bovis, cost the country an estimated £100 million ($131 million) in 2014 alone through compensation and control measures.

But the latest government-funded study — which involved fitting GPS collars and radio collars to track the whereabouts of hundreds of cows and scores of badgers — suggests that bovine TB is probably not passed by direct contact between species, but rather indirectly through contaminated pasture, says Rosie Woodroffe, a badger specialist at the Zoological Society of London who led the work. Despite recording thousands of nights of data, the team didn't observe a single contact between badgers and cows. “This helps to explain why TB is so hard to control,” she says.

The findings suggest that badgers like to hang around earthworm-rich cattle pasture, but not the cattle themselves. Badger faeces and sputum — and cow pats from infected cattle — might be the carriers of M. bovis in farms, Woodroffe says. And in most cases, pasture and slurry from herds in which bovine TB has been detected is not treated as infectious, she adds.

The work backs up an earlier, smaller-scale study in Northern Ireland, which also suggested that badgers don’t often meet cows2. “To have corroboration from a different location involving large numbers of animals is very reassuring,” says Declan O’Mahony, a mammal ecologist at the Belfast-based Agri-Food & Biosciences Institute who led the smaller study, funded by a department in Northern Ireland's devolved government.

Researchers now have to work out how best to reduce the indirect, environmental transmission of bovine TB, says Andrew Conlan, who studies disease dynamics at the University of Cambridge, UK.

The implications for the government’s hotly disputed policy of killing badgers to control disease spread are less clear. The work “certainly doesn’t increase the case for badger culling”, says Woodroffe, who is one of a number of scientists who have long questioned the scientific basis of the culls.

But John Krebs, a zoologist at the University of Oxford, UK, who opposes badger culling, says that the results are a “further nail in the coffin of the policy of culling badgers to control bovine TB in cattle”. Krebs, who is also a member of the UK's House of Lords, led a nine-year trial into the efficacy of badger killing3, which suggested that culling around 70% of badgers in large areas would lead to a reduction in bovine TB of up to 16%. He thinks these benefits do not justify major culls. “The much bigger issue is cattle-to-cattle transmission within and between herds,” he says.

However, another round of badger culling is widely expected for 2016: a public consultation on the topic closed in March. So far, the cull has been trialled in three regions of England, but nine regions are now being considered for badger-hunting licences.