The largest-ever analysis of the quality of mouse studies reveals that as recently as 2014, only around 50% of research papers recorded both the sex and age of the animals used — key details needed for others to assess and reproduce the research1. 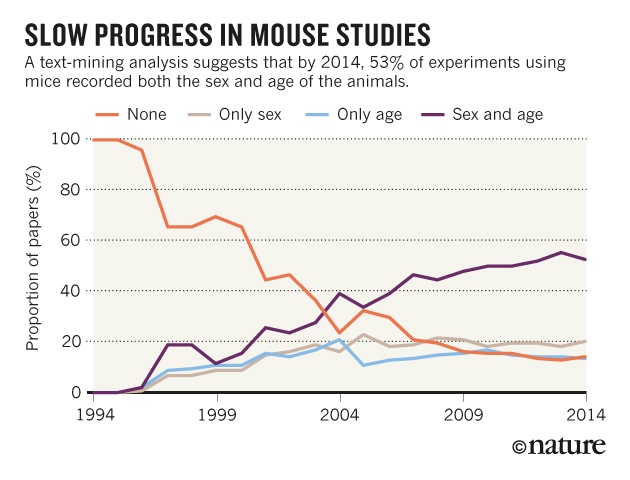 The analysis, which used software to trawl through the text of more than 15,000 open-access papers published between 1994 and 2014, also reveals the preferences of different research fields. Cardiovascular research tends to use male mice, whereas research on infectious diseases such as HIV and tuberculosis favours female mice, for example.

The study is “the strongest evidence about sex and age bias through biomedical research to date”, say its authors.

Many researchers have pointed out that male and female mice — like men and women — can have different responses to drugs or different behaviours in laboratory experiments. One study last year, for instance, found2 that although inhibiting the function of immune cells called microglia helps to relieve pain in male mice, it doesn’t do so in female mice. The difference might explain why some clinical trials of pain drugs have failed.

Recognizing the problem, the US National Institutes of Health said in 2014 that it would require researchers to report their plans for the balance of male and female animals in preclinical studies. But even before that, scientists had been urged to report in more detail the strains, sexes and ages of the mice they experimented on.

“It’s useful to see what’s happening in a large-scale study — which has thrown up some things we weren’t expecting,” says Andrew Brass, a bioinformatician at the University of Manchester, UK, and a co-author of the study, which is published in eLife1.

One surprise was that although recording of animal studies improved through the 1990s and 2000s, standards seem to have plateaued after 2010 — despite the introduction that year of a voluntary checklist to improve reporting, called the ARRIVE guidelines3.

The study shows the power of being able to mine the full text of research papers, says Malcolm Macleod, a stroke researcher and specialist in trial design at the University of Edinburgh, UK. But he notes that the fully open papers that can be mined may not be representative of the entire scientific literature: scientists who want to make their papers open may be “among the more enlightened”, he suggests.

Previous research has consistently suggested that researchers tend to use male mice in studies — but the eLife paper reports that, where the sex of animals is recorded, the mice are more likely to be female. That surprises Caroline Zeiss, a veterinary neuropathologist at Yale University in New Haven, Connecticut. The discrepancy might result from biases in the specific fields of research that the eLife paper examined, she says.

The sex bias varied according to the type of biomedical study, and even between studies of the same disease. Diabetes research, for example, was found to be male-biased overall — but studies on the immunology of the condition tended to use female mice. There was no correlation between reporting standards and the impact factor of the journal in which the studies were published, the researchers found.