Amid rumours that precision gene-editing techniques have been used to modify the DNA of human embryos, researchers have called for a moratorium on the use of the technology in reproductive cells. 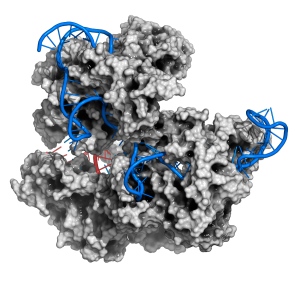 The gene-editing technique CRISPR uses an enzyme (white) and RNA guides (blue) to cut DNA at a point specified by a DNA fragment (red).

In a Comment published on 12 March in Nature1, Edward Lanphier, chairman of the Alliance for Regenerative Medicine in Washington DC, and four co-authors call on scientists to agree not to modify human embryos — even for research.

“Such research could be exploited for non-therapeutic modifications. We are concerned that a public outcry about such an ethical breach could hinder a promising area of therapeutic development,” write Lanphier and his colleagues, who include Fyodor Urnov, a pioneer in gene-editing techniques and scientist at Sangamo BioSciences in Richmond, California. Many groups, including Urnov's company, are already using gene-editing tools to develop therapies that correct genetic defects in people (such as by editing white blood cells). They fear that attempts to produce ‘designer babies’ by applying the methods to embryos will create a backlash against all use of the technology.

Known as germline modification, edits to embryos, eggs or sperm are of particular concern because a person created using such cells would have had their genetic make-up changed without consent, and would permanently pass down that change to future generations.

“We need a halt on anything that approaches germline editing in human embryos,” Lanphier, who is also chief executive of Sangamo, told Nature’s news team.

But other scientists disagree with that stance. Although there needs to be a wide discussion of the safety and ethics of editing embryos and reproductive cells, they say, the potential to eliminate inherited diseases means that scientists should pursue research.

Geneticist Xingxu Huang of ShanghaiTech University in China, for example, is currently seeking permission from his institution’s ethics committee to try genetically modifying discarded human embryos. In February 2014, he reported2 using a gene-editing technique to modify embryos that developed into live monkeys. Human embryos would not be allowed to develop to full term in his experiments, but the technique “gives lots of potential for its application in humans,” he says.

Besides Huang’s work, gene-editing techniques are also being used by Juan Carlos Izpisua Belmonte, a developmental biologist at the Salk Institute for Biological Studies in La Jolla, California, to eliminate disease-causing mutations from mitochondria, the cell's energy-processing structures. Belmonte's work is on unfertilized eggs; human eggs with such modified mitochondria could one day be used in in vitro fertilization (IVF) procedures to prevent a woman's offspring from inheriting mitochondrial disease.

There are also suspicions that scientists have already created human embryos with edited genomes. Several researchers who do not want to be named told Nature’s news team that papers describing such work are being considered for publication.

Scientists who attended a meeting in Napa, California, in January to discuss potential uses of germline gene-editing have written a perspective paper about their concerns for publication in Science. Geneticist Dana Carroll of the University of Utah in Salt Lake City, who was at the Napa meeting, says that it will call for discussions of the safety and ethics of using editing techniques on human embryos.

“Germline genome alterations are permanent and heritable, so very, very careful consideration needs to be taken in advance of such applications,” Carroll says.

Germline gene editing is already banned by law in many countries — a 2014 review by Tetsuya Ishii, a bioethicist at Hokkaido University in Sapporo, Japan, found that of 39 countries, 29 have laws or guidelines that ban the practice. But the development of precise gene-editing techniques in recent years has brought fresh urgency to the issue. These techniques use enzymes called nucleases to snip DNA at specific points and then delete or rewrite the genetic information at those locations. The methods are simple enough to be used in a fertility clinic, raising fears that they might be applied in humans before safety concerns have been addressed.

One concern, for example, is that the nucleases could cause mutations at locations other than those targeted. Guanghui Liu, a stem-cell researcher at the Chinese Academy of Sciences Institute of Biophysics in Beijing, collaborated on a study3 that showed that modifying one gene in stem cells resulted in minimal mutations elsewhere, but he warns that this is only one case.

Every application to use gene-editing technology for a therapy would have to be validated independently as safe and effective, says Jennifer Doudna, a biochemist at the University of California, Berkeley. “It would be necessary to decide, for each potential application, whether the risks outweigh the possible benefit to a patient. I think this assessment must be made on a case-by-case basis,” she says.

Ishii worries about countries such as the United States: there, germline editing is not banned but requires government approval, but such restrictions have a history of being circumvented, as in the case of unproven stem-cell treatments. He is also concerned about China, which prohibits gene-editing of embryos but does not strictly enforce similar rules, as shown by failed attempts to curb the use of ultrasound for sex selection and to stamp out unauthorized stem-cell clinics. China is also where gene-editing techniques in primates have developed fastest. “There are already a lot of dodgy fertility clinics around the world,” he says.