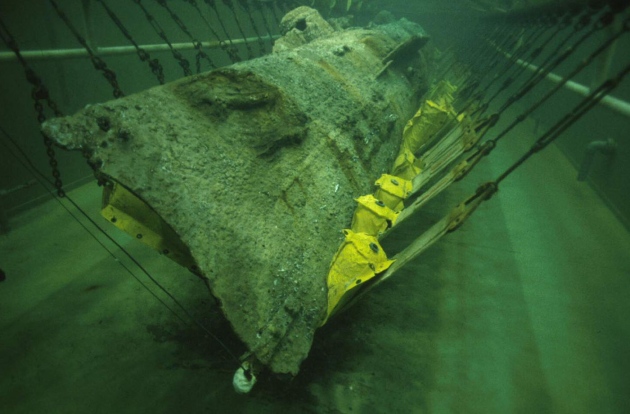 Friends of the Hunley

The Hunley in a preservation tank.

Researchers say they’ve solved one of the most enduring mysteries of the American Civil War: what caused the puzzling demise of the H.L. Hunley, the first combat submarine in history to sink an enemy warship.

The Confederate craft famously disappeared with all its crew on 17 February 1864, just after destroying the USS Housatonic in Charleston Harbour. The Hunley’s wreck was not found until 1995. When it was raised from the seabed in 2000, the skeletons of its eight-man crew were still at their stations, with no evidence of escape attempts.

Since then, archaeologists and conservationists have pored over the submarine, which is kept at Clemson University Restoration Institute in South Carolina, for clues to its destruction. Popular theories have suggested that the crew of the Housatonic managed to shoot holes in the craft; that the Hunley accidentally collided with another ship; or that its crew were incapacitated, and perhaps instantly killed, by the blast from the submarine’s own torpedo.

The latter theory now seems correct, says Rachel Lance, a graduate student in injury biomechanics at Duke University, North Carolina. “The pressure wave from the explosion was transmitted into the submarine. It was sufficiently large that the crew were killed,” she says.

Lance and other researchers simulated the explosive forces the crew experienced by blowing up a scale model dubbed the USS Tiny, one-sixth the size of the Hunley, while it was submerged in a farmer’s pond.  They published their findings on 23 August in PLOS One1.

The Hunley was one of many early submersibles developed by the Union and Confederate sides in the Civil War while each side battled for naval supremacy, says James Delgado, a former director of maritime heritage at the US National Oceanic and Atmospheric Administration. (Delgado is now vice-president at a marine archaeology firm called SEARCH, based in Florida).

The 12-metre-long vessel was built from sheets of high-tensile boiler iron, held together by rivets hammered flush with her exterior to minimize drag. The crew used geared hand cranks to power the craft, and sat hunched on a bench over the central crankshaft. The Hunley’s only weapon was a black gunpowder-filled copper cylinder — “about the size of a beer keg”, says Lance – attached to a 6.7-metre pole mounted on the bow.

In 2013, the theory that the explosion from this cylinder had affected the Hunley’s own crew gained credence when researchers established that the submarine was still attached to the explosive charge when it went off. They found copper ribbons from the charge embedded in the pole; suggesting that the torpedo was never designed to be detached from the submarine, but was intended instead to be rammed directly into an enemy ship.

To gauge the effect of the explosion, Lance and other researchers blasted the Tiny with increasingly large black-powder charges, and used sensors to measure the peak pressure experienced inside the midget submarine. Lance then used equations to scale up the blast to match that which struck the crew of the Hunley, which had a much thinner hull than modern submarines do.

Robert Salzar, who studies blast injury biomechanics at the University of Virginia in Charlottesville says that the blast might have killed the crew indirectly, by knocking them unconscious and causing the craft to sink, but he doubts that the effect was instantaneous. The bleeding and trauma caused by excessive pressure on the lungs — a condition called blast lung — is “not instantly lethal by itself”, Salzar says.

Lance says that to be sure about the blast strength, a full-scale re-creation would be needed. She says her findings suggest that the crew had a 16% chance of survival, based only on the lung trauma they would probably have experienced. But she adds that the absence of an autopsy — which would have had to be performed right after the Hunley’s sinking — makes it impossible to determine a precise cause of death.

By the night of the Hunley’s final mission, the submarine had already sunk twice during training, killing 13 men — including Horace Lawson Hunley, a wealthy lawyer who gave his name and financial support to the vessel.

Still, says Delgado, perceptions of the craft as a failed experiment are wrong. The submarine was at the cutting edge of nautical engineering for its time, and its pyrrhic victory bolstered the spirits of the Confederate side after a string of battlefield defeats. “There’s nothing primitive about the Hunley,” Delgado says.