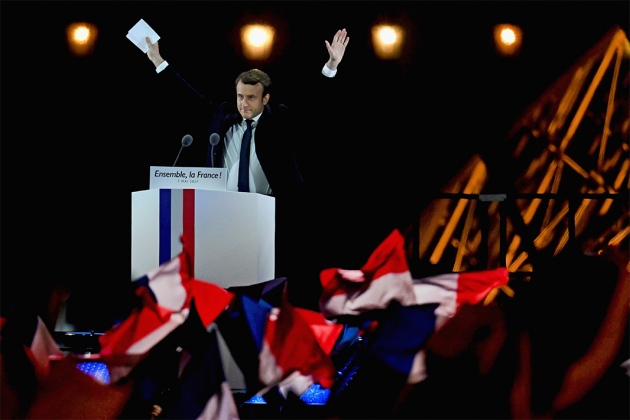 French scientists say they’re relieved and happy that their country’s next president will be Emmanuel Macron, a 39-year-old former civil servant and economy minister who swept to victory in elections on 7 May.

Macron intends to make cuts to public spending, but has said he will ring-fence the budgets for research and higher education, areas that he wants to make the central plank of a programme to boost innovation and cut unemployment. He has also pledged to invest in environmental and clean-energy measures. But his ability to implement these policies will depend heavily on the results of legislative elections in June. If he doesn't have enough support in France's parliament, the new president will find it hard to propose and pass new laws.

For now, scientists who spoke to Nature say they are just pleased that Macron so decisively defeated his opponent Marine Le Pen, the leader of the nationalistic, far-right Front National party — gaining 66% of the vote to Le Pen’s 34%. "Macron’s election comes as a huge relief to me; the alternative was just unimaginable," says Frédéric Dardel, president of Paris Descartes University, one of the country's leading research universities.

"I am more than relieved, I am delighted to see that Emmanuel Macron has won the election by a wide margin," says Catherine Cesarsky, an astrophysicist at the CEA, France's atomic energy commission, near Paris.

French research bodies rarely take overt positions on elections, but this one was different. France’s academy of science, the heads of nine national research agencies and many prominent scientists had all made public appeals against Le Pen’s party ahead of Sunday’s head-to-head vote, arguing that the Front National’s illiberal and anti-immigrant views threatened the tolerant, open and democratic environment in which science and evidence-based policy thrives.

"Unlike the Front National, Emmanuel Macron bears the republican and humanist values that we defend, and which constitute the DNA of universities," says Gilles Roussel, who heads France's Conference of University Presidents, which in April had called for a vote against Le Pen.

Le Pen had also wanted to hold a referendum on whether France should remain in the European Union. By contrast, Macron and many French scientists are enthusiastic supporters of the EU. A Le Pen victory would have been a "major disaster" for European and international cooperation in science, says Dardel.

Young, thoughtful and ‘open to discussion’

Researchers say they draw confidence from Macron’s general outlook on science, innovation and the environment. He has said that he plans to invest money in training young people, on clean energy and  environmental measures, and on modernizing agriculture, health care, transport and infrastructure. Research on these issues may receive extra funding, predicts Thierry Coulhon, a mathematician and president of the PSL Research University in Paris, who was also an adviser to the Macron campaign on research and higher education.

Coulhon says that Macron aims to free up innovation in universities by decentralizing power and reducing bureaucracy; in particular, Macron intends to let universities hire lecturers and researchers without having to wait for a central administration in Paris to approve appointments. Coulhon expects that Macron’s policies on France’s national research agencies will be more about continuity, with less need for major reforms.

Macron is familiar with the worlds of research and higher education, says Cesarsky, who is one of a group of scientists who before the election asked 11 presidential candidates about their plans for science.

"Macron's team appears genuinely open to discussion with the research community," says Dardel. "We have a blank sheet in front of us, and if we can manage to get the right messages through, we could really move forward. There is a window of opportunity now, which the French scientific community should seize."

Although Macron will appoint a prime minister and government within days, he will need to win a majority in June’s parliamentary elections to have a good chance of implementing his policies.

Neither of the two major parties that have dominated French politics for decades had candidates in the final presidential run-off on 7 May. Macron heads a grassroots political movement called En Marche !, which he created only last year. The movement has no existing members of parliament, and voters who chose Macron to keep out Le Pen in the presidential race may support candidates from different parties in the parliamentary elections on 11 and 18 June. So Macron may end up with a coalition government, or become a 'lame-duck' president hobbled by a prime minister or government from another party.

It’s unclear whether the new parliament will recognize the importance of research and higher education, says Bernard Bigot, director-general of the multibillion-euro nuclear-fusion project ITER in St-Paul-lez-Durance, southern France. "There's a large risk that other priorities will dominate," he says.

Le Pen’s defeat does not mean that the threat of the Front National has gone away, researchers caution. Her party may also make a strong showing in June’s elections; the increasing influence of its ideas in French politics and society is also a concern. "We remain worried because the ideas of the Front National continue to rise steadily and become more commonplace,” says Roussel.

But Macron's win provides hope, scientists say. "With everything we have seen in the world recently, from the election of Trump, to Brexit and the rise of extremism in Europe, for the first time now we have a strong movement against," says Édouard Brézin, an emeritus theoretical physicist at the École Normale Supérieure in Paris and a former president of the CNRS, France's basic-research agency. "I'm glad that this movement should come from France."