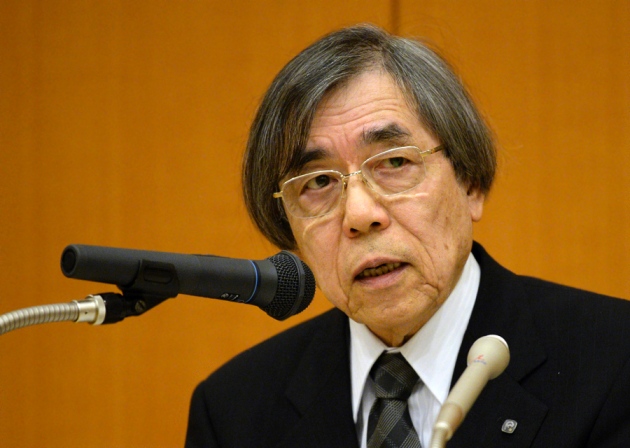 Masatoshi Takeichi, who has led The RIKEN CDB since its founding in 2000, has received excessive criticism, some international researchers say.

Researchers around the globe are voicing support for a Japanese research centre that faces ‘dismantlement’ after one of its researchers was found guilty of scientific misconduct.

The controversy swirls around Haruko Obokata, a biochemist at the RIKEN Center for Developmental Biology (CDB) in Kobe, who was found guilty of manipulating data in a paper, published in Nature, that claims a recipe for making embryonic-like stem cells with a technology called stimulus-triggered acquisition of pluripotency (STAP). (Nature’s news and comment team is editorially independent of its research editorial team.) In April, RIKEN launched an independent ‘reform committee’ to advise on how the CDB can avoid such incidents in the future. In a 29-page report released on 12 June, the panel advised “quickly dismantling” the 14-year-old centre.

A caveat included in the report that a new organization might be built in its place did not appease concerned scientists. At least 160 have written to RIKEN management in support for “one of the world’s outstanding research institutes in the area of developmental and cell biology,” in the words of stem-cell biologist Janet Rossant of the Hospital for Sick Children in Toronto. Rossant, outgoing president of the International Society for Stem Cell Research, says that she is “deeply disturbed by the reports suggesting that the CDB be totally reorganized as a result of one case of possible research misconduct.”

Richard Behringer, a developmental biologist at the MD Anderson Cancer Center in Houston, Texas, calls the CDB a “shining star and international nexus for developmental and stem-cell biology research and scientific exchange” and says that dismantling it “would be a tragedy for the field of developmental biology and Japanese basic and translational science”.

The reform committee, composed of six members and led by materials scientist Teruo Kishi of University of Tokyo, focused on governance issues at RIKEN and the CDB. It faults the CDB, for example, for keeping the same basic management since opening in 2000, with cellular biologist Masatoshi Takeichi as head. Takeichi admits that stale leadership “was an enabling factor to the recent lapses in judgement”, he told Nature. He is now trying to find a new director. The report also faults RIKEN for failing to make sure that all of its principal investigators took leadership training.

Takeichi says that much of the report is off base. It accuses the CDB of circumventing normal hiring procedures in a determined effort to hire Obokata, but, according to Takeichi, the committee misrepresented CDB’s standard procedures, which were followed with the exception of the requirement to give a public lecture, which was waived in her case. Takeichi also says that the report’s criticism of the CDB’s ongoing effort to reevaluate the STAP claims is “inappropriate and unscientific”. And senior stem-cell scientists who have seen the reevaluation protocol have praised it. Rudolf Jaenisch, a biologist at the Whitehead Institute for Biomedical Research in Cambridge, Massachusetts, says it “looks like a rigorous protocol that hopefully will settle the question [of] whether pluripotent STAP cells can be generated or not”.

The report also states that Obokata’s hiring was the result of “a strong desire to make a revolutionary discovery surpassing [induced pluripotent stem cells]”, in reference to the method, pioneered at Kyoto University, for creating such cells. Takeichi calls this “mere ungrounded psychological speculation”.

Kishi and other members of the reform committee did not answer requests to provide substantiation of these speculations, a reaction to the factual errors alleged by Takeichi or evidence of the deep “structural flaws” in the CDB that, according to the report, “encourages scientific misconduct”. Obokata is the first CDB researcher to have been found guilty of misconduct.

In an e-mail to Nature, one of the committee members, Masaki Nakamura, who studies science and education policy at Osaka University, wrote that the committee declined to answer questions about the grounds for its criticism to “avoid any unnecessary confusions and/or misunderstanding”. The e-mail, which was signed off by the reform committee, gave a second reason: “Our committee has fulfilled our mission and has now been dissolved.”

The closing of a large institute over a single incidence of misconduct would be unprecedented and harsh, says Nicholas Steneck, who studies research integrity at the University of Michigan in Ann Arbor. He says that the problems flagged by the committee, such as lack of oversight and poor data management, are frequent in the United States and elsewhere, and that faulting an institution for them is problematic.

Researchers contacted by Nature agree on several points: Takeichi is, in the words of Rossant, “a leader of impeccable integrity and rigour”; problems of oversight and data management are common and should be addressed by measures such as better mentoring, rather than an upheaval; and penalizing an entire research organization — the CDB has some 540 staff — for one case of misconduct while ignoring its long list of achievements is unfair and unjustified.

“It’s absurd,” says Maria Leptin, a molecular biologist and director of the European Molecular Biology Organisation in Heidelberg, Germany. Leptin says that dismantling the CDB, even if it is replaced with a new centre, will cause a lot of upheaval for the researchers there. “It will be guilt by association, even for those who have been doing their science in the most ethical manner,” she says. “It may even be more damaging than the incident itself.”

A RIKEN spokesperson says that a decision on whether to follow the recommendation will be made “based on opinions from the government, academics from Japan and abroad, from industry and from the RIKEN Advisory Council”.

This story originally gave an incorrect affiliation for Richard Behringer. He is at the MD Anderson Cancer Center in Houston, Texas, not the Baylor College of Medicine. The text has now been corrected.