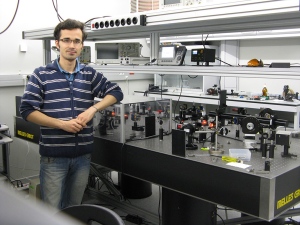 Omid Kokabee was a physics PhD student when he was arrested in Tehran in 2011.

The 10-year prison sentence imposed on physics PhD student Omid Kokabee in Iran for conspiring with foreign countries has triggered protests by scientific organizations around the world.

The Committee of Concerned Scientists in New York has launched a petition asking the Iranian government to release Kokabee, and Scholars at Risk, another human-rights watchdog in New York, has called for people to send letters, faxes and e-mails to the appropriate authorities requesting a reconsideration of his conviction. And many physics, optics and chemistry societies in Europe and the United States (the American Chemical Society, the American Physical Society, the International Society for Optics and Photonics, the Optical Society of America, and the European Optical Society) have sent, or are drafting, open letters to Iran’s supreme leader Ayatollah Ali Khamen'i, asking that the student be treated fairly.

Kokabee’s case has also been highlighted in a declaration by 17 organizations, including Amnesty International and Human Rights Watch that asks Iran to uphold the right to education and to academic freedom. Friends and contacts of Omid Kokabee are promoting an online petition to Amnesty International and related organizations, and human-rights activists have launched a Twitter 'storm' around another petition.

Kokabee is a 29-year-old experimental-laser physicist who did part of his PhD studies at the Institute of Photonic Sciences in Barcelona, before moving to the University of Texas at Austin in 2010. He was arrested in February 2011 while returning to the United States after a holiday in Iran, charged with communicating with a hostile government and taking illegal earnings. After 15 months of detention, he was sentenced on 12 May to 10 years in prison.

Kokabee and his friends say he was not a political activist. In open letters sent from Tehran’s Evin jail, he has claimed that he has not been allowed to talk with his lawyer. Close contacts in Iran have told Nature that the prosecution did not present any evidence during the trial. These people say that Kokabee has appealed the sentence, and has complained to the judge in charge of the trial, Abolghasem Salavati, of unfair treatment, including exposure on television.

Arash Alaei, a doctor who led pioneering AIDS damage-reduction programmes in Iran before being jailed between 2008 and 2011 (see 'Iranian AIDS doctors continued work behind bars'), spent 8 months in the same prison as Kokabee. “He was under stress, but as well he was one of the most active prisoners in giving English classes to the others,” says Alaei. “Omid’s jailing is a message for other scientists: the government does not like independent researchers that do their job outside of its programmes,” he says.

Mahmood Amiry-Moghaddam, a neuroscientist at Oslo University and spokesman for the non-governmental organization Iran Human Rights, says that it is important for researchers to stand up for Kokabee. “If universities and scientists do not react to this sentence, any Iranian researcher abroad may be accused of spying,” he says.

Kokabee’s story has spread anxiety among Iranian students abroad. An Iranian student in Barcelona, who asked to remain anonymous, says: “Since I found out about his detention I have not gone back to Iran: I plan to reduce my visits to the minimum, to avoid risk.”