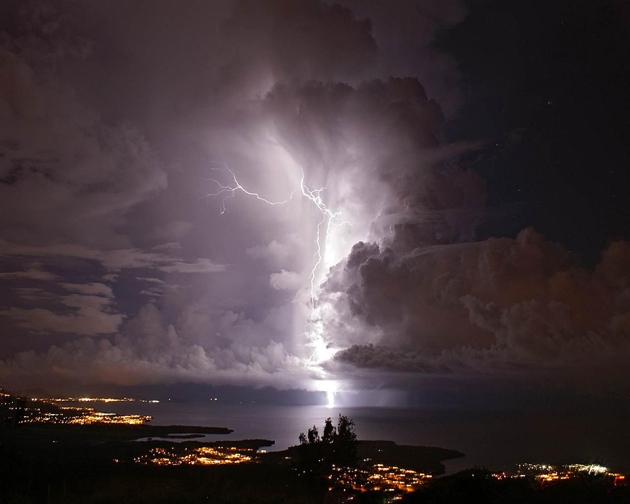 Northern Venezuela is home to a lightning hotspot.

Most people avoid spending time in lightning-prone locales. But this month, scientists are heading to an area of Venezuela that sees more lightning strikes than anywhere else in the world, to test a system designed to forecast strike frequency up to three months in advance.

They are going to the right place: the region around Lake Maracaibo in northern Venezuela, which normally surpasses 200 strikes per square kilometre each year1. The researchers — led by Ángel Muñoz, a climate scientist at Princeton University in New Jersey — will monitor atmospheric conditions and lightning strikes there for the next 3 years, collecting data for 72-hour periods every 3 months.

Muñoz and his team will compare these data with projections from a lightning model that they have developed2, in the hope of producing a system that can accurately predict lightning frequency in this part of Venezuela months in advance. Such projections could help to improve the safety of rural, fishing and farming communities, the oil and gas industry and power grids.

“Can we say something about lightning activity three months in advance?” asks Muñoz. “We’re showing that it’s not only possible, but that forecasts in this part of the world are actually very skilful.”

But expanding that model to other regions might be difficult, says Andrew Dowdy, a climate scientist at the Australian Bureau of Meteorology in Melbourne. His research has shown3 that the weather cycle known as the El Niño–Southern Oscillation helps to create lightning patterns that differ by season and by region.

Furthermore, a lack of long-term lightning observations in many parts of the world makes it difficult to separate the influence of climate change from variations in weather caused by local effects such as the expansion of urban heat islands. One study4 projects that the frequency of lightning strikes in North America will increase by 12% for every degree Celsius of warming.

Muñoz’s team developed its model using almost two decades of satellite lightning maps, plus data on winds, sea surface temperature and atmospheric pressure and moisture in the Lake Maracaibo Basin. The researchers will collect more such data this summer, using ‘microweather’ stations secured at fixed intervals along the tethers of weather balloons at altitudes of up to 1.4 kilometres. The stations transmit their observations to the ground every ten minutes by Wi-Fi, as ground-based detectors measure lightning activity.

The researchers will also install a ground-based lightning sensor in Venezuela that will feed into a global monitoring network run by Robert Holzworth, an atmospheric and space physicist at the University of Washington in Seattle.

Holzworth, who plans to install a further ten stations of his own at sites around the world in the next few months, says that the data they collect could help to reveal whether strike locations are changing as regional temperatures shift.

Meanwhile, NASA is poised to launch two new space-based lightning sensors — continuing a record of satellite measurements that began in 1997. These sensors will be able to detect lightning in clouds, complementing ground-based measurements of strike locations.

NASA’s Geostationary Operational Environmental Satellite R-series weather satellite, scheduled to launch in November, will carry the world’s first geostationary lightning mapper. The detector will provide 24/7 measurements of lightning over much of the Americas. That same month, the agency will send a spare lightning sensor to be installed on the International Space Station.