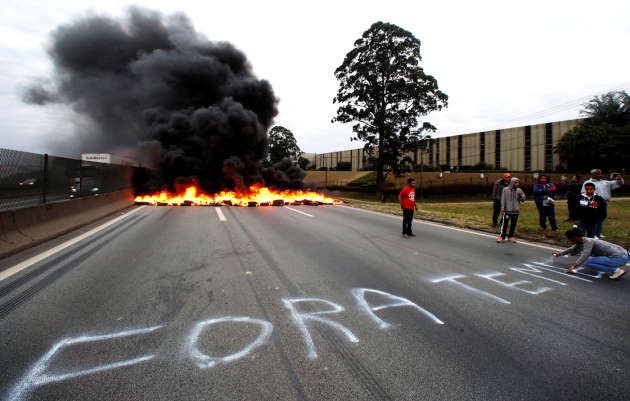 Anxiety is growing in Brazil over the country’s collapsing research budgets. President Michel Temer had slashed funding for science by 44% in March and has proposed additional decreases for 2018 — even as some science institutes run out of money for basic needs, such as paying electricity bills. The 2017 science budget, at 3.2 billion reais (US$1 billion), is the lowest the country has seen in at least 12 years.

On 3 October, the government announced that it will release 440 million reais to science agencies to help keep them afloat until the end of this year. But the money is only about 20% of what’s needed, said the Brazilian Society for the Advancement of Science in a statement.

Researchers continue to voice their alarm, with a march scheduled for 8 October in São Paulo — the third such demonstration this year protesting the funding shortfalls. And on 10 October, a public awareness campaign called Conhecimento Sem Cortes (Knowledge without cuts) will deliver a petition to Congress with more than 80,000 signatures protesting both the cuts and a 2016 constitutional amendment that put a 20-year cap on federal spending.

They all hope to influence a revision of the 2018 budget proposal — first submitted to Congress by the executive branch in August — which included a 16% cut to the Ministry of Science, Technology, Innovations and Communications (MCTIC). The Temer administration has promised to release a revised budget in the coming weeks.

If the 16% cut remains, it would leave a total of about 2.7 billion reais for 22 federal laboratories and research institutes, 73 National Science and Technology Institutes and Brazil’s major science funding agencies, the National Council for Scientific and Technological Development (CNPq) and the Funding Authority for Studies and Projects. “This means institutions will shut down by August next year”, says physicist Luiz Davidovich, president of the Brazilian Academy of Sciences.

Davidovich's estimate is based on what has happened this year. MCTIC started 2017 at 5 billion reais, its smallest budget in a decade when adjusted for inflation. In March, after the 44% cut, the ministry was left with 2.8 billion reais, not including money for special projects such as the Sirius synchrotron. The budget rises to 3.2 billion reais with those projects. As a result, institutions began running out of cash in September.

“We don’t have money for electricity bills or for buying radiopharmaceuticals”, says José Augusto Perrotta at the federal Institute of Nuclear and Energy Research. Perrotta is the coordinator of the multi-purpose reactor, a 1.6-billion-reais project that is facing delays because of a lack of funding. This year, the reactor was supposed to receive 106 million reais but got nothing.

The Brazilian Center for Physics Research isn’t doing much better. “We‘ll be able to see it through December without layoffs, but next year I’ll have to cancel all equipment maintenance contracts”, says Ronald Shellard, the centre’s director. The institution’s proposed 2018 budget is 7.8 million reais — well below the 12.7 million reais Shellard says it needs to survive.

Brazil’s 1.6-billion-reais Sirius synchrotron is also in jeopardy. The 2018 budget proposal doesn’t provide funding for the facility’s construction, which is slated for completion in mid-2018.

The build is still on schedule after science minister Gilberto Kassab unfroze 85 million reais this month, says Antonio José Roque da Silva, director of the Brazilian Synchrotron Light Laboratory and head of the project. However, the synchrotron will need an additional 331 million reais to complete construction. “I pay contractors with cash, not with promises,” says Roque.

Also at risk is Brazil’s collaboration with CERN, Europe’s particle-physics laboratory near Geneva in Switzerland. The 2017 budget cuts eliminated Brazil’s financial support for CERN, and the proposed 2018 budget doesn’t resume those payments.

The biggest threat, however, is to CNPq, Brazil’s main source of federal research grants. The agency hasn’t paid out the grants it green-lit last year, didn’t launch its annual call for project proposals this year and is 400 million reais short of what it needs to honour its commitments in 2017. If the situation isn’t sorted, Marcelo Morales, a CNPq executive director, fears a repeat of 2016, when scholarships for undergraduates and scientists abroad were suspended.

The continuing funding crisis is already driving away students and young scientists. Sergio Ferreira, a neuroscientist at the Federal University of Rio de Janeiro, runs a lab whose budget has gone downhill since 2014. It's now an average of 85,000 reais — one-tenth of what it used to be. This year, five of Ferreira’s graduate students had to spend six months abroad working with his collaborators because he couldn’t afford the materials the students needed for their research.

“In my group I have several people who have left or are about to leave for good, with no plans to come back”, Ferreira says. “I can’t keep a skeleton colony of students.”