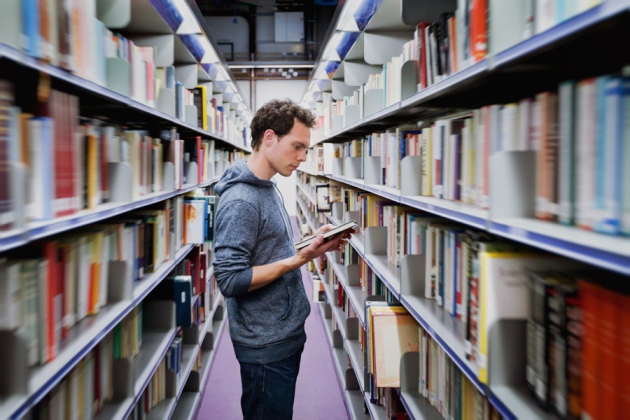 A survey of the reading habits of US university researchers saw a drop in the traditional, print-based consumption of information.

A 35-year trend of researchers reading ever more scholarly papers seems to be levelling off. In 2012, US scientists and social scientists estimated that they read, on average, 22 scholarly articles per month (or 264 per year). That is, statistically, not different from what they reported in an identical survey last conducted in 2005. It is the first time since the reading-habit questionnaire began in 1977 that manuscript consumption has not increased.

“People have probably hit the limit of the time they have available to read articles,” says information scientist Carol Tenopir, who led the study.

Tenopir, who heads the Center for Information and Communication Studies at the University of Tennessee in Knoxville, speculates that a wealth of other information sources is cutting away from the time scholars have to read articles in detail. The survey defines ‘reading’ as going beyond titles or abstracts to the main body of an article, and so it does not reveal whether researchers are quickly skimming over more articles than they did before.

Tenopir’s colleague Donald King began mailing out a reading-habits questionnaire to scholars in 1977. It asked them to recall details of their last scholarly reading, and to estimate the number of scholarly articles they had read in the past month. Researchers said that they got through 12–13 articles per month, and spent an average of 48 minutes on each article. Through the 1980s and 90s, they progressively reported reading more and more articles, but spending less and less time on each.

In 2005, Tenopir and King’s questionnaire found a marked leap in article numbers — which Tenopir thinks may have resulted from a huge increase in access to digitized back-files — and a decrease in the time taken per article, falling to 32 minutes. Aside from the levelling out of article readings, the latest survey of 800 scholars, which is due to appear in the journal Learned Publishing1, also finds that the time taken per article seems to have bottomed out at just over half an hour.

Further details from the study reveal that scholars now read more than half their articles on an electronic screen, whereas in 2005, just one-fifth of readings took place on screen. However, researchers over 60 years old reported that 58% of their readings were still on paper (including printed-out versions of downloaded articles). Print readings were generally read with more care, according to the survey

The study is valuable because it stretches back such a long time, but the questions it asks may be increasingly outdated, notes David Nicholas, former head of information science at University College London, who now runs a consultancy firm, CIBER Research, in Newbury, UK. When articles were only available in print, it was implicitly assumed by communication analysts that researchers always read manuscripts in their entirety, as if a ‘scholarly article’ was an object to be consumed as a whole. That may never have been true, he says: most of the time, scholars were likely scanning for particular snippets of information.

Now that researchers can look for articles online, it is clearer that they “power-browse”, says Nicholas, bouncing through a terrain of articles with four or five browser windows open at any one time. Nicholas, who has come to his conclusions by examining log files to study the digital footprints of scholars online, says that shorter articles are more likely to be read than longer ones. “We need to burn up some of the books we wrote on information seeking and how scientists get information,” he says — and that should also apply to the way researchers write their articles. “Why are we asking people to do 100,000-word PhDs? Because long is better than short? It isn’t any more.”

Tenopir acknowledges that a day may come when her survey questions no longer fit scholarly activity, and comparisons to previous years lose meaning. The questionnaire asks: “In the past month, approximately how many scholarly articles have you read?” But, notes Tenopir, with databases, blogs and other information sources becoming increasingly important, “When will the definition of ‘an article’ become so opaque that we can’t ask the question any more?”

This article’s headline and details have been corrected in response to a re-analysis of the data by the authors of the study. At first, the paper had stated that scientists were reading fewer papers in 2012 than 2005. But in response to questions raised by Phil Davis, a scholarly-publishing consultant based in Ithaca, New York, the authors examined median amounts of reading — not just the mean amounts, which could have been skewed by a few respondents with very high reading levels — and the confidence intervals around those averages. The new analysis show no statistically significant difference between the two years.