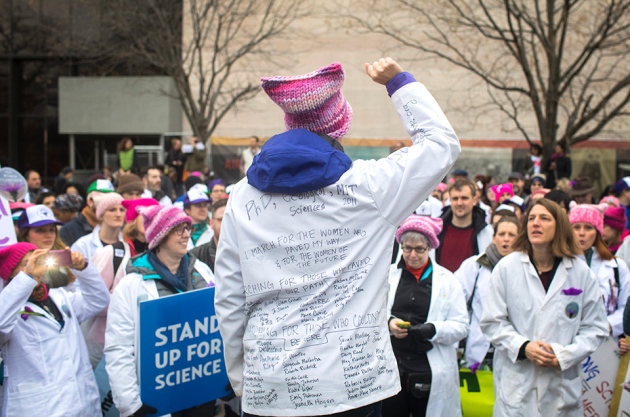 Christy Till, a geologist at Arizona State University in Tempe, speaks to members of the 500 Women Scientists group at the Women's March in DC.

The women in white lab coats didn’t expect to be treated like celebrities. The group of scientists, dozens strong, came to Washington DC on 21 January to join the Women’s March, a massive protest against the brand-new US President, Donald Trump.

But as they navigated the dense crowd near the National Air and Space Museum, the researchers were greeted by shouts of “We love science!” Eager strangers asked the scientists to pose for photographs with the signs they carried, which bore slogans such as “Stand up 4 Science” and “Science does not discriminate.”

The march drew hundreds of thousands of people to the US capital. It was organized to protest against Trump’s comments about women and reproductive health, but for many researchers at the event, the president’s positions on scientific issues are equally worrisome. Trump, who took office on 20 January, has questioned the science underlying climate change and suggested a link between childhood vaccinations and autism.

“Having this man be elected, and the people he’s placed so far [in government], is unbelievable,” said Erin DiMaggio, a geoscientist at Pennsylvania State University in University Park. “They're not supporting evidence-based anything.”

Celia Chen, an ecotoxicologist at Dartmouth College in Hanover, New Hampshire, came to the march with her daughter Jane, a graduate student in epidemiology at the University of North Carolina in Chapel Hill. Neither had been politically active, but after Trump’s election “we were feeling very depressed and said we had to come”, Celia Chen said.

The mother–daughter pair marched with a group called 500 Women Scientists, which formed in November 2016 to organize an open letter defending science, diversity and equality for women that now has more than 13,500 signatures. Members of the group, which is trying to build networks between women scientists in different countries, participated in Women’s March events all over the world on 21 January.

The group says that it had 150–200 scientists at the Washington DC march; another organization, the Association for Women in Science, had at least 30 people marching.

The day of activism reached as far south as McMurdo Station in Antarctica. About 95 of the 800 people stationed at the US research base attended the march to Hut Point, where British explorer Sir Robert Scott and his team camped in the early 1900s. The marchers did not have signs, because nearly all poster supplies at McMurdo are US government property.

The Washington DC march drew a number of US government employees. Several told Nature that they were worried for their jobs under the Trump administration, and requested anonymity to avoid violating their agencies’ policies about talking to the press.

Jennifer Kirk, a biostatistician who is about to start a job in the US Food and Drug Administration’s vaccine division, attended the march to protest the unequal treatment of women, particularly women of colour. She is also concerned about Trump’s views on vaccination. “Vaccines are one of our greatest medical triumphs,” Kirk said.

Others at the march were concerned about how the president’s immigration stance could affect international science collaborations and foreign researchers’ ability to study and work in the United States. Trump has pledged to build a wall along the US border with Mexico and to institute “extreme vetting” of people who want to come to the United States.

That has made some immigrant and minority scientists nervous, says Lindy Elkins-Tanton, a planetary scientist at Arizona State University in Tempe. “To make the best progress, we need to hear all voices,” she said. “You have to feel safe to speak up.”

Whatever the future brings, the scientists’ warm reception at the Washington DC march encouraged Kim Cobb, a climate scientist at the Georgia Institute of Technology in Atlanta. “As I heard the cheers and the echoes across the hundreds of thousands of people there today,” she said, “what I felt was the presence of an army of people who have my back”.

This story originally mischaracterized the reasons Jennifer Kirk attended the march: her motivation centred on the unequal treatment of women, especially women of colour, and not Trump’s views on vaccination. The text has been corrected to reflect this.