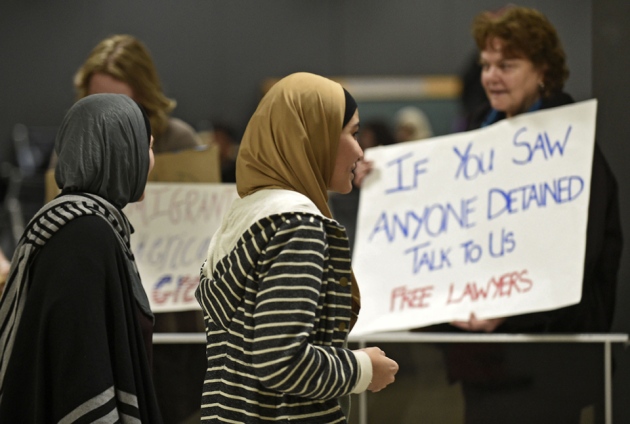 Immigration lawyers offer legal assistance to travellers affected by the US travel ban at Dulles Airport in Virginia on 6 February.

The US Supreme Court has reinstated a limited version of President Donald Trump’s temporary order banning travellers from six majority-Muslim countries from entering the United States. The court will hear a legal challenge to the ban in October.

The court’s decision, announced on 26 June, casts doubt on the fate of students and scientists from these countries who hope to study or work in the United States. It bars citizens of Iran, Libya, Somalia, Sudan, Syria and Yemen from travelling to the United States unless they have a “bona fide” connection with a person or entity in the country.

Such a relationship should be formal and documented, the court said. Examples include a person with an offer of admission from a US university or someone who has accepted a job offer from a US company or organization.

But that wording leaves room for interpretation, says Brendan Delaney, an immigration lawyer at Leavy, Frank & Delaney in Bethesda, Maryland. “Until there is some degree of certainty in how they’re going to apply this language, if I were a research scientist affected by this, I would be reticent right now” about making job or travel decisions, he says.

Nature wants to hear from you

Are you a scientist affected by the travel ban? Nature would like to talk with you. Contact reporter Sara Reardon at sara.reardon@us.nature.com or editor Lauren Morello at l.morello@us.nature.com. Anonymity is possible.

All US visas are granted at the discretion of immigration officials, who will now have to determine whether applicants from the six travel-ban countries have a “bona fide” relationship to the United States. Delaney notes that even after the government awards a visa, there is no guarantee that the person who receives it can cross the border into the United States. He hopes that US immigration officials will soon clarify how they are interpreting the Supreme Court decision.

“Right now, we’re back into a wait-and-see pattern,” Delaney says.

But regardless of the eventual outcome of the case before the Supreme Court, many researchers worry that uncertainty surrounding immigration to the United States — and perceptions that the country is unwelcoming — may have already driven away some international students and scientists.

“This is a big worry and concern, not just for the individual nations that have been specified [in the ban], but a broader concern that I certainly have heard from people all over the world,” says Katharine Donato, a sociologist at Georgetown University in Washington DC. She is beginning a research project that she hopes will quantify the policy’s impact on international students’ enrolment in US universities.

New York University, which has about 120 students and 12 faculty members and postdocs from the 6 affected countries, said today that it does not expect that any of those people will be directly affected by the Supreme Court decision. But Josh Taylor, the university’s associate vice chancellor for global programmes, still worries about the broader impacts.

“If we start to send this message that US higher education is no longer welcoming of all international students, that could impact a lot of us,” he says.

According to a 31 March white paper from the Institute of International Education in New York City, more than 15,000 university students — mostly in graduate programmes — and 2,100 scholars currently in the United States are from the 6 countries named in Trump’s executive order.

Trump said on 14 June that the travel ban would take effect within 72 hours if the Supreme Court lifted injunctions on its enforcement that had been put in place by lower courts. In a statement today, he called the court’s decision “a clear victory for our national security”.

The president signed his first attempt at a travel ban into law on 27 January. That order blocked citizens of 7 countries — the 6 affected by today’s ruling, plus Iraq — from entering the United States for 90 days. It also barred all refugees for 120 days, and Syrian refugees indefinitely.

Scientists and students were among those caught up in the ban’s messy aftermath. Several who had accepted jobs in the United States or had plans to study at US universities were unable to enter the country as planned, and some US visa holders who had left the country to travel were temporarily barred from returning.

After several federal courts blocked Trump’s order, the president issued a revised ban on 6 March. That policy is the subject of the legal case now before the Supreme Court. It prevented people from the 6 countries from entering the United States for 90 days, with exemptions for permanent residents and current visa holders. The order also imposed a 120-day ban on refugees from Syria.

The policy was immediately challenged in federal court in several states, producing two rulings that blocked the ban from taking effect. The White House asked the Supreme Court to intervene, submitting an emergency request to allow the ban to proceed while the legal proceedings played out.

Universities have had a key role in fighting both versions of the travel ban. Washington state, which sued the administration over the original policy, cited the cases of several students and “medicine and science interns” who had planned to spend time at two state universities but were blocked from entering the country. And Hawaii, which challenged the revised ban, argued that the policy would harm the state by barring students who had been admitted to the University of Hawaii.