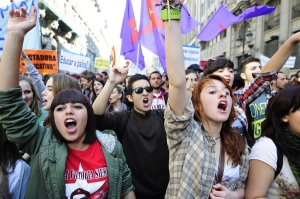 Spain's planned cuts to many sectors have sparked protests and demonstrations.

Scientists are warning Spain's government that its planned budget cuts and hiring freeze could be fatal for the nation's science.

An open letter opposing the cuts, so far signed by 65 organizations, and more than 36,000 people — including three Nobel laureates — was presented to the members of parliament at the Spanish Royal Academy of Sciences in Madrid this morning. However, Carmen Vela, Secretary of State for Research, Development and Innovation, has confirmed that both the budget cuts and the hiring freeze will go ahead, but that the government is working to minimize their impact.

“This document might be the last silver bullet of Spanish science,” says Amaya Moro-Martín, a physicist at the Centre for Astrobiology in Madrid and spokeswoman of the grassroots organization Investigación Digna (Dignified research). Investigación Digna is one of the promoters of the initiative, together with the Confederation of Spanish Scientific Societies, the Federation of Young Researchers and the country's two biggest unions.

After its first meeting in December, the Popular Party government announced a €600-million (US$784-million) cut in the science budget for 2012. Vela later updated the sum to €743 million, and warned that it could increase further. The latter would be a nearly 9% cut compared with last year, and 20% less than in 2009, when the central government’s investment in science peaked.

If the reduction is confirmed, the letter states, “would cause considerable long-term damage to the already weakened Spanish research system, contributing to its collapse”. It also says that the hiring freeze could cause “a ‘brain drain’ that would take decades to reverse”.

“Until a few years ago, the Spanish scientific establishment had been following a remarkable growth trajectory. Austerity in scientific education and research is a very unwise choice for Spain,” says Sheldon Glashow, a Nobel-prizewinning physicist at Boston University in Massachusetts, who visits Spain frequently for his research and has added his name to the list of signatories.

Spanish science has reached “a point of no return”, says Carlos Duarte, a biologist at the Mediterranean Institute for Advanced Studies in Spain's Balearic Islands, and a member of the European Research Council's scientific committee. “Either we succeed in maintaining research activity, or we will cease to be a major country in science.”

Helga Nowotny, president of the European Research Council, says that she is most concerned about the young researchers. “They are the ones who are most at risk either to leave the country or to leave science.” A hiring freeze would mean universities and public research institutions, like the National Research Council (CSIC), could not hire for permanent positions.

How effective the letter will be in changing policy depends how much Prime Minister Mariano Rajoy is willing to compromise, says Duarte. Similar initiatives have been ignored in the past, he says.

No one from the government attended the presentation. Vela says that the country’s complicated financial situation “forces austerity, so we must accept a certain amount of cuts”. And for the hiring freeze, Vela says that “we would like this to last the shortest time possible, and we are working to minimize its impact”. The final decisions will be revealed in the budget proposal, to be presented on 30 March.

Alejandro Fernández, the Popular Party’s science spokesman in parliament, says that the main problem with research in Spain is the lack of private investment in research. “The government will correct this problem in this mandate,” he says, although he would not specify how.