Researchers studying communities of microbes need to up their game. That was the argument made by two articles published on 28 October in Science1 and Nature2, which called for national and international initiatives that would unite microbiome researchers and move the field forward. The initiatives would help researchers to develop better, standardized ways to study microbial communities so that scientists can make meaningful comparisons of data sets across different studies. Some researchers were sceptical. Nick Loman, a bacterial geneticist at the University of Birmingham, UK, tweeted:

But the proponents say that the two articles are just starting points for broader discussion in the field.

Microbiome studies focus on the bacteria and other microbes living in sites ranging from soil to the human mouth. In the Science piece, US researchers argued that for microbiology to move beyond descriptive studies towards hypothesis- and application-driven science, the field needs to bring in scientists from other disciplines and create tools that manipulate microbial communities and their genes. The authors proposed that a national Unified Microbiome Initiative (UMI) would develop and implement these tools, and called for new funding mechanisms for interdisciplinary research.

The Nature article, by authors in the United States, Germany and China, responds to the US researchers’ proposal by calling for an International Microbiome Initiative (IMI). This would coordinate the efforts of a global, interdisciplinary group of scientists, including the UMI, allowing researchers to share data. “By pooling data from scientists from around the world, an IMI would generate much more knowledge than could one country alone,” the authors write.

Several scientists greeted the proposals with enthusiasm, including Roman Stilling, a postdoctoral fellow at the APC Microbiome Institute at University College Cork, Ireland. He said in an e-mail to Nature: “Standardization may help ensure reproducibility and may help other researchers with guidelines to follow when they want to start working on the microbiome too.”

But Patrick Schloss, a microbiologist at the University of Michigan in Ann Arbor, questioned the need for a global initiative, tweeting:

Schloss later tempered his tweets in a blog post, writing that he and others are already developing tools to study microbial data and pursuing hypothesis-driven work. He wrote that funding for interdisciplinary microbiome research would be “awesome”, but added in an interview that a lot of details are missing from the proposals. “In fairness, we don’t really know much about what is being planned,” Schloss says, adding that the proposals seem primarily to be a call for government support, rather than a concrete plan. “There’s no funding mandate, there’s nothing really. Just a bunch of ideas,” he says.

These are works in progress, says microbial ecologist Jack Gilbert at the University of Chicago in Illinois, a co-author of the Science article. “To put down immediately at this point that we have a clear funding method, this is what we want to fund, these are the research areas we think are valid, would have been crass,” Gilbert says.

Other scientists expressed concern that standardizing methods and data sharing might stifle creativity in a rapidly evolving field. Loman wrote in an e-mail to Nature that there are often good reasons for methodological differences between microbiologists studying different ecosystems such as the gut or soil. “Should we standardise on one protocol?” he adds. “We don’t even know what the right technique is for many niches.”

And as Noah Fierer, a microbial ecologist at the University of Colorado, Boulder, added in a blog post: “Methods are constantly changing (hopefully improving) and many of these improvements come from smaller labs that may not be directly involved in the consortium that decides the consensus methods.”

These criticisms of the call for standardization surprised Nicole Dubilier, a co-author of the Nature piece who is a microbiologist at the Max Planck Institute for Marine Microbiology in Bremen, Germany. “If there’s one thing that will help the field, it’s standardization,” she says. “Standardization is the key to comparing results.”

Some scientists poked fun at the grand aims of the initiatives. Josh Neufeld, a microbial ecologist at the University of Waterloo in Canada, tweeted: 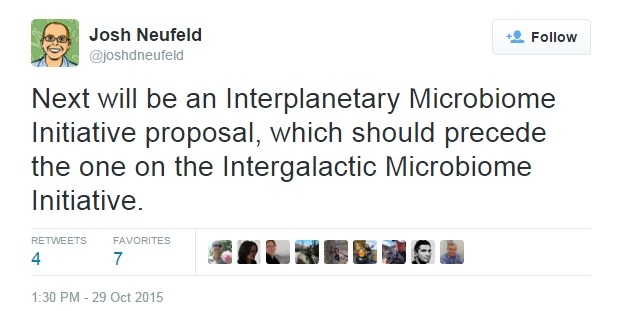