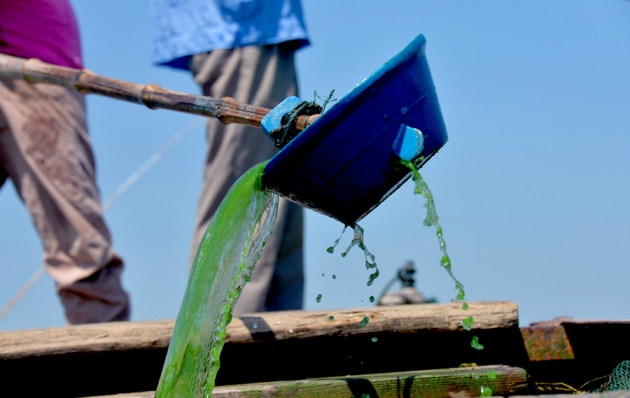 The environmental clean up of Lake Tai (where pollution causes blooms of blue-green algae) was among the large-scale projects marred by corruption, the Chinese government says.

An anti-corruption campaign by the Chinese government has charged that seven leading scientists from five universities allegedly misused US$4.1 million of government research grants, according to a report posted on the Ministry of Science and Technology's website on 10 October.

The announcement follows an investigation by the National Audit Office (NAO) of more than a dozen engineering and applied-research ‘megaprojects'. Together, the projects receive a whopping $8 billion a year in funding.

Five projects are singled out in the government report: transgenic technology; water-pollution remediation of Lake Tai, a large freshwater lake near Shanghai; drug discovery; prevention and control of infectious diseases; and development of electronic devices.

According to the report, six of the scientists are being detained, and two of them — Chen Yingxu, a former vice-president of Zhejiang University in Hangzhou, and Song Maoqiang, an electronic engineer at Beijing University of Posts and Telecommunications — already pleaded guilty after a hearing earlier this year.

According to reports by Xinhua, China’s state news agency, both Chen, who headed the water-remediation project, and Song, who led the effort to develop cutting-edge electronic devices, have each received ten-year prison terms for diverting research funds of $1.5 million and $111,000, respectively, for their personal use.

The science ministry has also alleged serious financial irregularities — such as forging of receipts and invoices and use of funds for inappropriate purposes — at more than 20 other universities and institutes. These include prestigious institutions such as the Institute of Microbiology of the Chinese Academy of Sciences (CAS) and the Chinese Academy of Agricultural Sciences' Biotechnology Research Institute, both in Beijing, and Shanghai Jiao Tong University.

One of the six scientists under arrest is Li Ning, an animal-cloning researcher at the China Agricultural University in Beijing and a principal investigator in the transgenic-technology project. He is the first academician (elected fellow) of the Chinese Academy of Engineering (CAE) to be implicated in an alleged embezzlement case.

The prestigious academy has vowed to keep its house clean (see 'Chinese Academies promise cleaner elections'). Its spokesman Dong Qingjiu told Nature that if Li is found guilty, “he would be punished according to academy regulations”, which stipulate that if a member breaks the law, he or she will be stripped of the title of academician. This would be another first for the academy.

Despite the magnitude of the alleged embezzlement, it seems that few Chinese researchers are surprised by the NAO's findings. “Many scientists take a rather ‘flexible’ approach towards using their grants,” says Duan Yibing, a science-policy researcher at the CAS Institute of Policy and Management in Beijing.

Indeed, a report released by the NAO last October showed that up to half of all research funds had been misused (see 'China goes back to basics on research funding'). Duan says that what the investigation has uncovered so far “is just the tip of the iceberg”.

But “individual scientists should not take all the blame”, says Cong Cao, an expert on Chinese science policy at the University of Nottingham, UK. The corruption cases indicate that “something is terribly wrong with how research grants are allocated and managed in China”. The system lacks proper transparency guidelines and oversight mechanisms, he says. “This provides fertile ground for rampant corruption.”

Due to an editing error, an earlier version of this article contained an additional quote from Cong Cao that was out of context. The quote has now been removed.