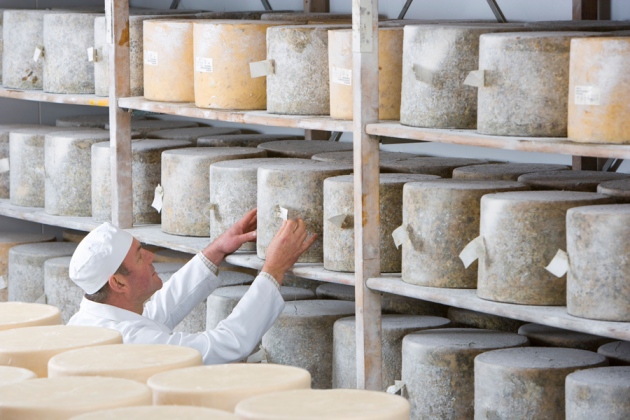 A cheesemaker checks cheddar cheese wheels in a farmhouse cellar.

When Rachel Dutton looks at a wheel of cheese, she sees a menagerie. “I fall in love every time I look at a cheese rind. They’re wonderful microbial ecosystems,” she says.

Dutton, a microbiologist at Harvard University in Cambridge, Massachusetts, was a star speaker at a meeting last week that brought scientists and artisanal cheesemakers to a dairy farm in Somerset, UK. The two camps have more in common than a love of mature cheddar — although several large wheels of it were served at lunch on the first day of the two-day meeting, and one attendee was spotted wearing a T-shirt that read ‘Blessed are the cheesemakers’.

Dutton came to Somerset to present her team’s latest work, but also to trade research ideas with cheesemakers, whom she likens to microbial ecologists. “The environment that they create on the surface of the cheese really determines what types of microbes actually grow,” Dutton says. “They have a lot of power in controlling these communities.”

Working with cheese producers from around the world, Dutton and her team used DNA sequencing to analyse the microbial communities on the rinds of 137 types of cheese. They found that factors under the control of the fromagier, such as the amount of moisture, pH and the ageing process, influence the microbial makeup of a cheese rind to a much greater extent than the cheese’s country of origin1.

Listen to Ewen Callaway's audio report from the cheese meeting.

Soft goat’s cheeses with white fungus rinds, for example, tend to harbour similar microbial communities whether they come from northern England or the Loire Valley in France. The team reported its findings last month in Cell1.

Their study is not a one-off foray into the world of food. Dutton recently gave a talk the annual meeting of the American Cheese Society, where she also got to perform gustatory analyses of several specimens ("I've never been so sick, just overindulging," she says). She sees cheese as an ideal model system for studying the rules that govern complex microbial communities, such as those in a human gut or the ocean. “My research is pretty much entirely focused on the study of the microbial communities that grow on the surface of cheese during the ageing process,” she says. “That’s sort of our lab rat in our research.”

For the Cell paper, Dutton and her team reconstructed the microbial communities from cheese rinds by adding different combinations of bacteria and fungi to an agar plate made of milk curd. “We basically make a lab version of cheese," she says, allowing her team to determine how different species of microbes interact. Dutton has never tasted her lab cheeses, but some of them smell terrific, she says.

Joe Bennett, a cheesemaker at Highfields Farm Dairy in Staffordshire, UK, who attended the conference, says that he is aware of his role in shaping the microbial communities in the soft goat’s cheeses he and his mother produce on their farm. But his goal is to make cheeses that represent the place they were made, a concept known among winemakers as terroir. “I think cheese should always reflect the area that your animals are living. Our terroir would be quite specific to the part of Staffordshire where we make cheese,” Bennett says.

Cheeses from some parts of the world are at risk of losing their microbial terroir, Nathalie Desmasures, a microbiologist at the University of Caen, France, told the meeting. Microbial diversity on dairy farms in Europe has plummeted in the past 30 years, she says, as a result of efforts to rein in pathogens such as Salmonella and Listeria. Desmasures says that many of the cheesemakers she works with in Normandy now complain that their cheeses have lost some flavour and uniqueness as regulations have required farms to introduce more sterile conditions in their processes.

Desmasures wants to help to restore that lost terroir. She and her team have identified factors, such as the breed of cattle and the type of milking machine, that seem to boost microbial diversity2. Last month her team, along with a group of Camembert makers, launched an effort to reintroduce some microbes into Normandy’s cheeses. Drawing from a collection of thousands of microbes associated with dairying kept at Desmasures’ university, they plan to identify microbial strains that affect the characteristics of a cheese — through the production of acids or aromatic compounds, for example — and add them to the raw milk used to make Camembert.

A similar project is getting under way in Australia, where raw milk is banned from nearly all types of cheesemaking. The plan is to isolate microbes from raw milk, culture them and then put them back into pasteurized milk that small dairies use to make cheese. “They have the potential to create something that's geographically their own,” says Alison Lansley, secretary atthe Australian Specialist Cheesemakers’ Association. “They have their own terroir.”

Dutton is intrigued by these projects, but she says that it can be hard to predict how microbes will fare after they are added in the cheesemaking process. For instance, she says, many cheesemakers add Brevibacterium to their cheeses, yet these bacteria are rarely found in cheese rinds.

Unpredictability, Desmasures says, is nothing new for artisanal cheesemakers. “In my opinion, artisan cheeses, traditional cheeses are surprises, and each time you eat such cheese you are waiting for a different thing,” she says. “That’s why microbial diversity is important.”