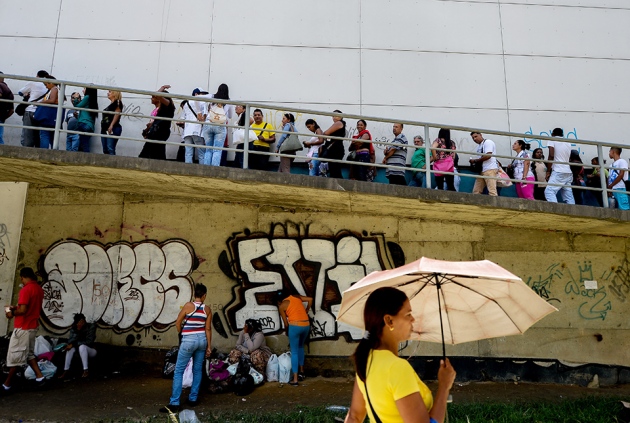 People line up to buy groceries outside a supermarket in Caracas.

The political and economic crisis in Venezuela continues to worsen. As the price of oil — the country’s major export — has fallen, Venezuela has struggled to pay for imported goods while maintaining socialist economic policies put in place by former president Hugo Chávez.

Claudio Bifano, a chemist at the Central University of Venezuela in Caracas, continues to teach despite rolling blackouts, food lines and increasing violence. "This is not a good time for the country, but we have to keep working," he says. "We have to keep living."

Bifano, who is also the president of the Latin American Academy of Sciences, spoke to Nature about how Venezuelan scientists are coping with the turmoil. This interview has been edited for length and clarity.

There is a serious scarcity of food and medicines, and there is high inflation, so the little that people can buy is extremely expensive. We depend on what the government imports, and as the credit that the government uses for imports is shrinking, it is more difficult to import. This is an economic model that has proven absolutely inefficient.

How are the food shortages affecting society?

We're already seeing a malnutrition problem. Many schools can no longer serve lunches, and the schools that still provide lunch, in a couple of states, as far as I know, serve 40% of what they used to provide. In a few years, we'll see the consequences of children and youth who were malnourished and had poor health care. Those problems will affect the country's development.

How are universities weathering the crisis?

Universities are becoming degraded because of incomprehensible policies. Of the budget that autonomous universities receive from the state, 95% goes to pay personnel and only 5% is left for infrastructure, graduate programmes, research, outreach and everything else that universities should do. And the salaries are ridiculous.

I am a tenured professor and have been working at the university for 50 years. I have a PhD from the University of California [San Diego]. I'm as high on the scale as I can go. My salary is 40,000 bolívares a month. At the real exchange rate, the rate at which I have to buy things in stores, I earn $40.

As a result, 700 professors, of a total of about 3,000, have left the Central University. Four hundred have left Simón Bolívar University [in Sartenejas], which is a relatively small university. And although the Metropolitan University [in Caracas] is a private university, about 10% of its personnel have left. Why? Simply because you can't live on the salary that the university pays.

Where are these people going?

In the area of science and technology, many go to the United States, others to European countries. A person with good academic training, a researcher or experienced professor, can get a job at an Ecuadorian university or go to Brazil, which has a policy to attract outside researchers to strengthen some of its universities.

Fewer and fewer. With the degrading of the universities, laboratories are eliminated, resources are lost. Libraries don't have current journals. Laboratories can't buy the reagents they need, because it's expensive to do research that's competitive internationally.

The government says there are 16,000 researchers here, and that it invests 2.6% of gross domestic product in science and technology, but the number of publications has decreased in recent years by practically 40%, and the flight of young, well-trained people from Venezuela is huge. In science and technology, it's estimated that 1,500 researchers have left the country.

What future do you foresee?

Something has to change. There are endless lines of people at markets, trying to buy food. The government controls the prices of some items and you can only buy them at certain stores. So when they say there are baby nappies or milk, for example, the lines are unending.

There has also been an increase in violence. Around 6 p.m., when it starts to get dark, I go home, because I don't feel safe on campus. About a month ago, there was a lynching in the Central University. A boy tried to snatch a girl's purse, a friend came to her aid and there was a fight. The assailant pulled out a pistol and shot the other boy, but fortunately only grazed his head. Then the assailant hid in the university, but other kids saw him, grabbed him and beat him to death, inside the university.

How are students dealing with the crisis?

They go to class, and I tell them, "Try to learn everything you can from your professors. Get as much education as you can." But when you ask, "How many of you want to practise your profession here in the country?" out of 10, two raise their hands. They're more material for export.

It will take a long time to recover from this — at least two generations. I don't think I'll see it.