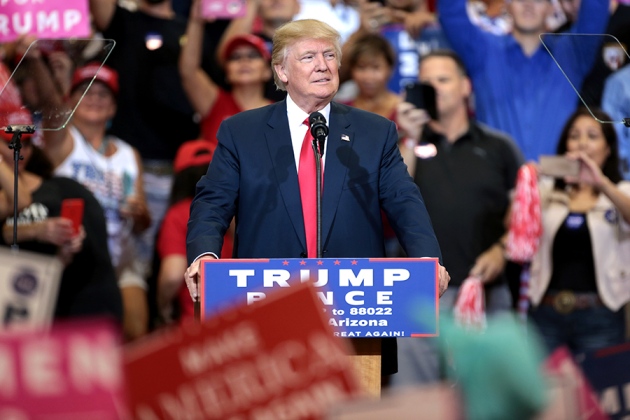 Donald Trump at a rally in Phoenix, Arizona.

Donald Trump’s election has dropped a bomb on US and global politics. The international reaction is one of shock and disbelief — and both will take some time to wear off, or at least to wear down. It is impossible to know the direction that the United States will take under his stewardship, not least because his campaign was inconsistent, contradictory and so full of falsehood and evasion. The people of the United States have not voted for his policies, for what are they? Americans have put their faith in an ideology, and pushed back against a political class and system that they feel, with some justification, has moved on without them.

In an Editorial last month, this journal argued that Trump was unsuitable for office. His contrary approach to evidence, disrespect for those he disagrees with and toxic attitudes to women and other groups have no place in a modern democracy.

He now has the chance to prove the many people who shared that view mistaken. And trying to prove people wrong, we know for sure, is one thing that Trump relishes. For those who opposed him, now is not the time to turn away from politics in disgust. It is a time to engage, and to address some of the issues he has raised, but in a constructive manner.

On science, it is clear that Trump’s stated position on immigration would be damaging and have immediate impacts for researchers and universities. But it is worth stressing — particularly to those outside the United States — that the American political system is designed with numerous checks and balances intended to make it difficult for a president to implement policies, radical or otherwise. This is a lesson that the outgoing president knows only too well. As always, the debates over funding and science-related policies will now shift to Congress (where the final make-up of the Senate remains in the balance as this article was published) and the federal agencies. The election of a new president does not alter the main message: scientists must make their voices heard.

What kind of president will Trump make? A clue, perhaps, might be found on the White House roof. President Jimmy Carter installed solar panels there. Ronald Reagan took them down. Barack Obama put some up again. What President Donald Trump will do is anyone’s guess.

The on–off saga of the Pennsylvania Avenue solar panels — first for hot water and now for electricity — mirrors the attitudes towards energy and climate of each resident beneath. Carter and Obama supported the top-down introduction of renewables. Reagan, as in many of his policies, believed in the judgement of the free market; he wanted his hot water free of government interference. During George W. Bush’s time, solar panels were quietly installed in the White House gardens, seemingly without his explicit knowledge or interest — which seems to sum up his attitude to greenhouse-gas emissions rather well.

Perhaps President Trump will leave the panels above his new home alone. During his campaign, he advocated energy independence for the United States — after all, the sun shines, in the words of the old song, from California to the New York Island. But he has railed against subsidies for solar and wind power, and has promised to tear up regulations that aim to trim the expansion and continuation of fossil-fuel use. He has also threatened to take the United States out of the newly enforced Paris agreement to tackle carbon emissions.

The president-elect should start by dropping his pantomime-villain act on climate change. If he does not, then, come January, he will be the only world leader who fails to acknowledge the threat for what it is: urgent, serious and demanding of mature and reasoned debate and action. As was widely reported, Trump the businessman accepts the risks of global warming and has requested permission in Ireland to build a sea wall to protect his golf course there from rising sea levels. He must also know that, although the solar panels that Carter and Obama erected were made in the United States, it is companies elsewhere, mainly in China, that now dominate the market.

The world has made its decision on climate change. Action is too slow and too weak, but momentum is building. Opportunities and fortunes are being made. The businessman soon to take over the White House must realize that the logical response is not to cry hoax and turn his back. The politician in Trump should do what he promised in his campaign: reject political orthodoxy and listen to the US people. His Republican Party’s position on climate change is rooted in the past. A March Gallup poll found that public concern about the problem had reached an eight-year high: some 64% of Americans, it suggested, worried a “great deal” or a “fair amount” about global warming. That is a lot more than the percentage who voted for President Trump.