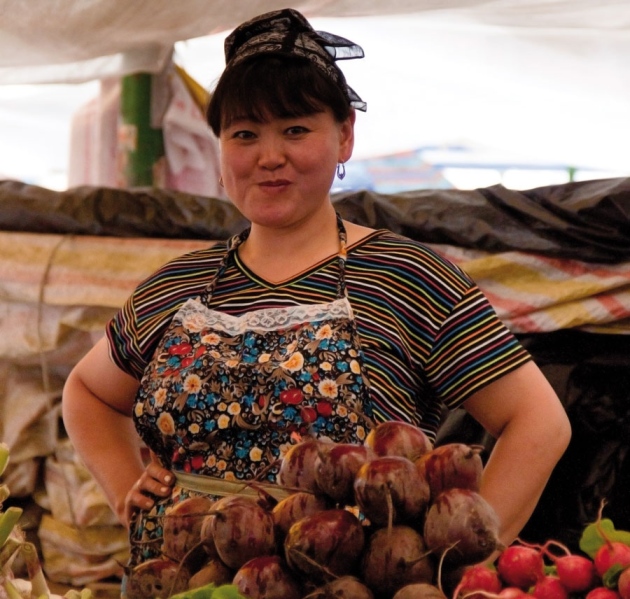 Researchers have studied genes and food preferences in populations from Georgia to Kyrgyzstan (pictured).

It wasn't quite the lowest point of the expedition. But Paolo Gasparini was decidedly uncomfortable at a banquet in the small town of Alga, Kazakhstan, when he was given the honour of dividing a boiled sheep's head among the gathering. He could sense the silent alarm of his young colleagues, fearing that soon they would be politely chewing on an eye or an ear. Fighting nausea, Gasparini, a medical geneticist at the University of Trieste, Italy, sympathetically sliced each of them just a taste of skin, passing the traditionally valued sense organs to the village elders.

The sheep's-head ritual did, however, neatly reflect the mission of the trip. The Italian scientists were gathering DNA samples from members of the many different ethnic groups that live along the Silk Road — a 2,000-year-old trading route between China and Europe — to map the genetic roots of food preference and of the senses that contribute to it. The team set out from Trieste in July 2010 and collected its final samples this June in northern Kyrgyzstan. It had amassed about 1,100 DNA samples and thousands of sensory-test results from a dozen or so distinct populations, ranging from Caucasian to Turkish and Mongolian.

Over the past two decades, researchers have identified receptors on the tongue for sweet, umami ('savoury'), bitter, sour and salty. They have realized that the sensation of flavour is created when signals from these receptors are integrated in the brain with food-related signals from the hundreds of odorant receptors in the nose and nasal passages. But understanding why people prefer certain foods is still a major scientific puzzle.

Subtle variations in the genes that encode the taste and smell receptors are likely to have a big influence. But many genes involved in touch, hearing and sight — those that respond to the creamy feel of fatty food, the sound of crunching nuts, the sight of a crimson tomato — also have a role. Travelling the Silk Road gave Gasparini and his team a unique opportunity to identify genetic influences on food preference by studying isolated populations, in which such variants are relatively easy to find. “The expedition approaches an almost unexplored dimension of what makes people different,” says Yurii Aulchenko, a statistical geneticist from the Russian Academy of Sciences Institute of Cytology and Genetics in Novosibirsk.

On the Silk Road

Researchers in evolutionary and population genetics are watching with interest, as is the food industry. Humans evolved in environments where food was scarce and poisonous plants a constant threat. As a result, calorie-dense fatty foods can be hard to resist, whereas the bitter tastes that are common in toxic plants can make some nutritious foods, such as broccoli, unpalatable. In the modern, food-rich world, that genetic legacy helps to push people towards diets that contribute to obesity and ill-health. Understanding the roots of food preferences might one day help to change people's behaviour. “Eventually, industry might be able to develop foods that are enjoyable without being bad for you,” says Jim Kaput, head of clinical translational research at the Nestlé Institute of Health Sciences in Lausanne, Switzerland, which collaborates with the Nestlé Research Center in Lausanne on studies linking genomics and food preferences. “But right now we understand almost nothing — we need a lot more basic research,” says Kaput.

The Silk Road expedition — officially called Marco Polo, after the Venetian explorer who travelled the route in the thirteenth century — was born five years ago, when Gasparini met Enrico Balli, director of the Medialab of the International School for Advanced Studies in Trieste. The two hit it off immediately. Balli, a straight-talking physicist turned science-communicator, was itching to film exotic locations. Gasparini, tall and genial, had spent most of his scientific life studying the genetics of isolated communities in dead-end valleys of the Italian Alps. He had become interested in the genetics of food preferences, was consulting with food companies, and had been dreaming vaguely of accessing remote, isolated populations in more grandiose mountain chains in Asia or South America, where scientists have rarely ventured.

Such populations were often founded by just a few people who went on to marry within the group, so their descendants tend to be genetically homogeneous. This makes it easier to work out if a gene variant is associated with a particular characteristic, such as a taste preference, than it is in a large, genetically diverse group. Comparing different isolated populations can be even more valuable. If a variant is associated with the same trait in genetically different groups, that may be a sign that it is important across almost all populations.

Alison Abbott takes a tasty journey through Kyrgyzstan with the expedition team.

The Silk Road offers a potential paradise for such genetic exploration. The route traverses massive mountain ranges such as the Pamir and the Tian Shan in central Asia and passes through pockets of the nomadic tribes who originally populated the region, as well as ethnically diverse groups descended from traders who settled en route, often near the roadside inns called caravanserais. These populations did not tend to share their genes, but they did share recipes. Cuisines are remarkably similar along much of the Silk Road — variations on tandoor breads, noodles with vegetable or mutton sauces, and dried or fresh fruit. This means that differences in food preferences between groups are likely to be down to variations in genes rather than in dietary cultures, making them even more appealing to the geneticists.

But before Gasparini and Balli could study these groups, they had to reach them. They originally conceived the expedition as a do-it-yourself venture, in which they would simply drive themselves from country to country. Fortunately, they consulted Lilia Smelkova — co-founder of Terra Madre, a network of farmers in developing countries established by the non-profit campaign group Slow Food, which is based near Turin, Italy. Smelkova is an expert in the former Soviet republics that Gasparini and Balli planned to visit. “I thought they were quite crazy,” she says, knowing the civil-war-torn, multilingual, sometimes despotic territories that the scientists planned to traverse and the closed communities that they wanted to study. “But I loved their ideas, so I agreed to help — by joining them.” Smelkova used her contacts to help the researchers to win the confidence, and the cooperation, of villages on the route.

The team, consisting of ten or so people, split the expedition across three summers (see 'Silk-Road science'). The first year, they set off for Georgia armed with just a few clothes and some compact equipment, and fell into a gruelling schedule. Each day, they drove — often for many hours — to a community that was to be sampled and tested. A local Terra Madre helper explained the tests, and volunteers were asked to donate DNA by spitting into plastic tubes. Then the scientists tested volunteers' abilities to hear different sound frequencies, to taste salty or bitter compounds soaked into scraps of filter paper, to distinguish different shades of colour and to identify 12 different smells impregnated in marker-pen-like sticks. The team also showed the volunteers pictures of 80 different food types and asked them to indicate how much they liked or disliked each one. At night, the scientists would feed the results into their computers before collapsing into bed.

The expedition's success depended entirely on getting sample tubes containing saliva back to Italy, but this proved nerve-rackingly difficult. When they arrived home after the first leg in September 2010, the researchers found that Uzbek customs had stopped a precious shipment of 350 tubes gathered in Azerbaijan, Turkmenistan and Uzbekistan. Despite exhaustion, Balli says, “I flew back to Tashkent, and brought them straight back in a suitcase.”

Systematic analyses of the Silk Road data will keep the scientists busy for years. The team is carrying out a detailed analysis of small variants known as single-nucleotide polymorphisms (SNPs) in all the DNA samples, and will fully sequence up to 50 samples.

The scientists have already identified eight variants in known genes, including one for an ion channel involved in sensing spicy-hotness, which are associated with a taste for particular foods. And they have found that variants of the gene for the TAS1R2 protein, part of a sweetness receptor, are associated with a strong liking for vodka and white wine (N. Pirastu et al. J. Food Sci.; in the press). The results fit with reports linking preferences for alcohol and sweetness in mice (S. M. Brasser et al. Physiol. Genomics 41, 232–243; 2010), and hint that both substances are perceived by the same receptor.

There may be bigger scientific stories hiding in the data. Gasparini says that the team is seeing an emerging association in Tajikistani populations between an olfactory receptor gene and both sensitivity to bitter tastes and a tendency to mistake smells. If the finding holds up, it will be the first demonstrated genetic link between smell and taste perception, and it could help to explain how signals from different senses combine to sculpt individual food preferences. The finding may also offer clues to how evolution might have shaped the senses. “Who knows?” Gasparini muses. “Might evolution have compensated those who can't distinguish smells efficiently by selecting genes that make them more sensitive to bitter tastes, so they have a better chance of recognizing poisons?”

The genetic data will serve another purpose by filling a gap in the international 1000 Genomes Project, which is cataloguing genetic variants in different populations across the globe, but until now had no representatives from central Asia. Population geneticists curious about how different peoples evolved will find their own stories in the Silk Road DNA, says Aulchenko. “We know a lot about the big migrations — out of Africa, for example — but we don't know how trade shaped genetic variation.”

The data were hard won. At the trip's lowest point, on the drive through Tajikistan from Qal'aikhum to Khorugh in the Pamir Mountains, a road closure forced the jeep convoy to detour for 16 tense, sweltering hours along the Panj River, which forms part of the border with Afghanistan. The few metres between the road and the river were laid with landmines.

Still, Gasparini and Balli have caught the fieldwork bug, and are planning another expedition for next year. At the end of the nineteenth century, members of a small, isolated Italian population near Trieste emigrated in droves to South America — where they settled in different valleys in the Andes. Gasparini wants to compare these people's taste preferences and the acuity of their senses with those of their relatives in Italy. Unlike the Silk Road populations, the groups have the same genetic backgrounds but very different diets. Gasparini hopes that this will create a natural laboratory for exploring the interaction of diet and other environmental factors with interesting gene variants identified in the Silk Road samples.

Any discomforts of expedition science are overwhelmingly compensated for by the gains, says Gasparini. And if nothing else, the Marco Polo expedition taught him that boiled sheep's head is not his dish of choice.