Christoph Zollikofer witnessed the first birth of a Neanderthal in the modern age. In his anthropology lab at the University of Zurich, Switzerland, in 2007, the skull of a baby Homo neanderthalensis emerged from a photocopier-sized machine after a 20-hour noisy but painless delivery of whirring motors and spitting plastic. This modern miracle had endured a lengthy gestation: it took years for Zollikofer's collaborators to find suitable bones from a Neanderthal neonate, analyse them with a computed-tomography (CT) scanner and digitally stitch them together on the computer screen. The labour, however, was simple: Zollikofer just pressed 'print' on his lab's US$50,000 three-dimensional (3D) printer.

A pioneer in the use of 3D printing for research, Zollikofer started 20 years ago with a prototype that was even more expensive and required toxic materials and solvents — limitations that put off most scientists. But now newer, cheaper technology is catching on. Just as an inkjet printer sprays ink onto a page line by line, many modern 3D devices spray material — usually plastic — layer by layer onto a surface, building up a shape. Others fuse solid layers out of a vat of liquid or powdered plastic, often using ultraviolet or infrared light. Any complex shape can be printed, sometimes with the help of temporary scaffolding that is later dissolved or chipped away. These days, personal kits go for as little as $500, says Terry Wohlers, a consultant and market analyst based in Fort Collins, Colorado — although industrial systems cost an average of $73,000. Last year, he says, nearly 30,000 printers were sold worldwide, with academic institutions buying one-third of those in the $15,000–30,000 price range.

Early adopters are using the technology to investigate complex molecules, fashion custom lab tools, share rare artefacts and even print cardiac tissue that beats like a heart. At palaeontology and anthropology conferences, more and more people are carrying printouts of their favourite fossils or bones. “Anyone who thinks of themselves as an anthropologist needs the right computer graphics and a 3D printer. Otherwise it's like being a geneticist without a sequencer,” says Zollikofer.

The printouts are yielding insights that are not possible with more conventional methods. Neanderthal neonate fossils, for example, are extremely rare, so Zollikofer did not want to risk copying his fragile specimen with the usual plaster-casting methods. With the printout, however, Zollikofer could explore the logistics of Neanderthal births. Along with the neonate skull, he printed out an adult, female Neanderthal pelvis and literally re-enacted a delivery. Some researchers had speculated that Neanderthals' wide hips made labour easier than it is for modern humans, but Zollikofer's experiment showed that the bigger skulls of Neanderthal neonates counteracted that advantage (M. S. Ponce de León et al. Proc. Natl Acad. Sci. USA 105, 13764–13768; 2008). Like humans today, Neanderthals had the biggest heads — and brains — possible at birth, giving them a jump-start on development.

In his work, Zollikofer swaps back and forth between printed models and virtual ones. The computer models are good for calculating volumes or piecing together bone fragments — researchers can position them in space without gravity causing them to fall. But with the virtual models, he says, “you lose the sensation of touch, and even a notion of the size of the fossils”. The physical models are far better for seeing how pieces should fit together in the first place, he adds.

Chemists and molecular biologists have long used models to get a feel for molecular structures and make sense of X-ray and crystallography data. Just look at James Watson and Francis Crick, who in 1953 made their seminal discovery of DNA's structure with the help of a rickety construction of balls and sticks. 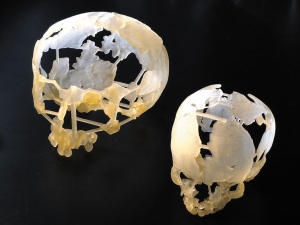 Printouts of Neanderthal skulls from a child (left) and a neonate.

These days, 3D printing is being used to mock up far more complex systems, says Arthur Olson, who founded the molecular graphics lab at the Scripps Research Institute in La Jolla, California, 30 years ago. These include molecular environments made up of thousands of interacting proteins, which would be onerous-to-impossible to make any other way. With 3D printers, Olson says, “anybody can make a custom model”. But not everybody does: many researchers lack easy access to a printer, aren't aware of the option or can't afford the printouts (which can cost $100 or more).

Yet Olson says that these models can bring important insights. When he printed out one protein for a colleague, they found a curvy 'tunnel' of empty space running right through it. The conduit couldn't be seen clearly on the computer screen, but a puff of air blown into one side of the model emerged from the other. Determining the length of such tunnels can help researchers to work out whether, and how, those channels transport molecules. Doing that on the computer would have required some new code; with a model, a bit of string did the trick.

Software that lets researchers twist and turn such structures on a computer screen is extremely useful, says Olson, but inadequate. Even the most advanced software will let two atoms occupy the same space. And tinkering with molecules inside a computer is a grind — it takes time for the computer to re-render an object after every turn, and interpreting the pictures requires mental effort. Fiddling with a physical model, on the other hand, is more like play. “I don't have to think about it; I just do it,” says Olson.

Olson is now trying to meld the tactile advantages of 3D printing with computer power: he has tagged printed models with small paper labels that can be recognized by a webcam, to create an 'augmented reality' view. In this way, a user can play with a physical model, while at the same time using the computer to explore aspects such as the potential energy of a given molecular arrangement. Olson is also looking forward to using printers that can more easily swap between rigid and bendable materials, so as to better replicate molecular behaviour such as protein folding.

Printer 'inks' aren't limited to plastic. Biologists have been experimenting with printing human cells — either individually or in multi-cell blobs — that fuse together naturally. These techniques have successfully produced blood vessels and beating heart tissue. The ultimate dream of printing out working organs is still a long way off — if it proves possible at all. But in the short term, researchers see potential for printing out 3D cell structures far more life-like than the typical flat ones that grow in a Petri dish.

For example, Organovo, a company based in San Diego, California, has developed a printer to build 3D tissue structures that could be used to test pharmaceuticals. The most advanced model it has created so far is for fibrosis: an excess of hard fibrous tissue and scarring that arises from interactions between an organ's internal cells and its outer layer. The company's next step will be to test drugs on this system. “It might be the case that 3D printing isn't the only way to do this, but it's a good way,” says Keith Murphy, a chemical engineer and chief executive of Organovo.

Other groups are using 3D printing of plastic or collagen to construct scaffolds on which cells can grow. Carl Simon, a biologist with the biomaterials group at the US National Institute of Standards and Technology in Gaithersburg, Maryland, says that the intricacies of scaffold shape can help to determine how cells grow, or how stem cells differentiate into different cell types. With 3D printing, researchers have a very controlled way to play with different scaffold configurations to see which work best. One problem, however, is that most 3D printers can produce details on the scale of only tens to hundreds of micrometres, whereas cells sense differences at the single-micrometre level. Top-quality printers can currently achieve 100-nanometre resolutions by using very short laser bursts to cure plastics, says Neil Hopkinson, an engineer who works with 3D printing at the University of Sheffield, UK, but this is “still very much in the lab”.

In the meantime, basic plastic 3D printers are starting to allow researchers to knock out customized tools. Leroy Cronin, a chemist at the University of Glasgow, UK, grabbed headlines this year with his invention of 'reactionware' — printed plastic vessels for small-scale chemistry (M. D. Symes et al. Nature Chem. 4, 349–354; 2012). Cronin replaced the 'inks' in a $2,000 commercially available printer with silicone-based shower sealant, a catalyst and reactants, so that entire reaction set-ups could be printed out. The point, he says, is to make customizable chemistry widely accessible. His paper showed how reactionware might be harnessed to produce new chemicals or to make tiny amounts of specific pharmaceuticals on demand. For now, other chemists see the idea as a clever gimmick, and are waiting to see what applications will follow.

Researchers in other fields have found a more immediate use for the technology. Philippe Baveye, an environmental engineer at Rensselaer Polytechnic Institute in Troy, New York, uses 3D printing to make custom parts for a permeameter — a device used to measure the flow of water through soils. Although commercially available devices are fine for routine work, he has often had to design his own for more precise research — a task that previously required many hours on a lathe. Printing, he says, is much easier.

Perhaps more importantly, Baveye can share his product just by publishing the design file. “The idea of being able to reproduce experiments described in the literature is taking on a new meaning,” he says.

Others agree that the real power of 3D printing lies in its ability to put science into the hands of the many. Cronin wants to enable anyone — whether in the far corners of Africa or in outer space — to print their own tiny drug factory. Museums can already distribute exact copies of rare or delicate fossils as widely as they wish. And students can print out whatever molecule they're trying to come to grips with. “Through 3D printing,' says Olson, “the ability to make physical models has become democratized.”