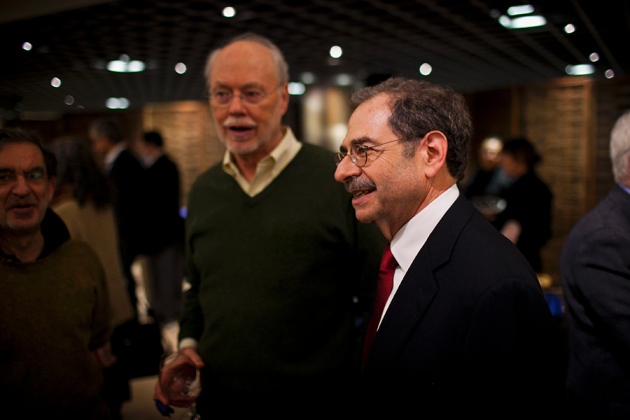 Physicist Marc Kastner (right) leads a group that advises donors on how to support scientific research.

Poring over a list of the top 50 US philanthropists in 2014, physicist Marc Kastner noticed that 16 were based in California, compared with just 6 in New York, Connecticut and New Jersey combined.

“That made it pretty clear where I should be,” says Kastner, who established the offices of the Science Philanthropy Alliance in Palo Alto, California, when he was named the organization’s first president in February 2015. The alliance is made up of philanthropic organizations that encourage funding in basic research and advise other philanthropists — especially new ones — on how to go about it.

That bet paid off last month, when Facebook founder Mark Zuckerberg and physician and educator Priscilla Chan announced that their Chan Zuckerberg Initiative would spend at least US$3-billion on medical research over the next decade. In remarks describing the initiative's plan to eliminate, manage or prevent all major disease by 2100, Zuckerberg urged fellow philanthropists to seek advice from Kastner.

“This is a milestone for the alliance, in the sense that its goal is to try to increase the funding for basic research across many fields, not just in biology,” says Robert Tjian, former president of the Howard Hughes Medical Institute (HHMI) in Chevy Chase, Maryland.

The HHMI was one of 6 founders of the alliance, which now counts 15 members. They include heavy hitters such as the Palo Alto-based Gordon and Betty Moore Foundation, the Kavli Foundation in Oxnard, California, and the London-based Wellcome Trust. Smaller up-and-coming members include the Eric and Wendy Schmidt Fund for Strategic Innovation in Palo Alto and the Heising-Simons Foundation, based in Los Altos, California.

The alliance formed in 2013 after a budget crunch hammered US government funding for research. The group focuses on boosting private giving to basic research, as pressure intensifies on agencies such as the US National Institutes of Health to fund more applied and translational research.

Kastner says he was drawn to his current job after watching young physicists struggling to start their careers at the Massachusetts Institute of Technology in Cambridge, where he worked for more than 40 years. “There was a need to support basic research that wasn’t being met, and I thought I could help by having philanthropists do some of that,” he says.

The physicist is poised to make a major impact on the shape of US philanthropy as its centre of gravity shifts west, away from New York, where philanthropic families such as the Rockefellers and the Carnegies based their foundations in the early twentieth century. West coast philanthropy is anchored by established players such as the Bill and Melinda Gates Foundation in Seattle, Washington. But new ones are joining at a rapid clip, such as the Parker Foundation in San Francisco, California, founded by Napster's Sean Parker. He has spent upwards of $280 million on cancer, allergy and malaria research.

Chan and Zuckerberg’s announcement showcases how the Science Philanthropy Alliance works. Initially, the pair considered funding translational research. But after conversations with the alliance, among other advisers, over many months, they decided to concentrate on fundamental research, especially the building of scientific tools and technologies. The alliance provided the couple with connections to scientists, as well as advice on defining basic research and how to structure and run a scientific advisory board.

“Philanthropists don’t want us to tell them what kind of research to support, but they want to make sure they’re doing it in the best way possible, and that’s what we want, too,” says Kastner.

The alliance also convenes private meetings at which members discuss questions such as how to measure the impact of philanthropic spending, and whether science funding is best spent on people, places or projects, says Harvey Fineberg, president of the Gordon and Betty Moore Foundation.

Crucially, the alliance does all of its work on a confidential basis. So Kastner won’t say what’s coming next. But he promises that it will be significant: “We’re talking to people who have the potential of making very big contributions to basic science.”