In J. Meade Falkner’s 1895 novel The Lost Stradivarius, a legendary violin discovered by a student turns out to have mysterious, ghostly powers. It might seem like a typical late-Victorian chiller, but Falkner’s attribution of mystical powers to violins made by the eighteenth-century Italian craftsman Antonio Stradivari is a fair reflection of their reputation among top violinists today.

Science has been steadily eroding that glamour for several years, through blind-test studies that have explored whether ‘Strads’ really are superior. Results have shown that even experts can’t distinguish a Stradivarius from a quality modern instrument. But some raised quibbles about the artificial listening conditions in those experiments. Now, the final nail seems to have been put into the coffin: a study reports that listeners in concert-hall conditions judge modern instruments to project their sound significantly better than Strads1 and to sound better overall.

“A belief in the near-miraculous qualities of Old Italian violins has preoccupied the violin world for centuries”, say the study’s authors, led by acoustics researcher Claudia Fritz at the Pierre and Marie Curie University in Paris. But now, they say, it’s time to lay the myth to rest and move on.

But is it really? Or might this be a case of science constraining a complex question into a form that can be measured and quantified, and thereby simplifying the story? 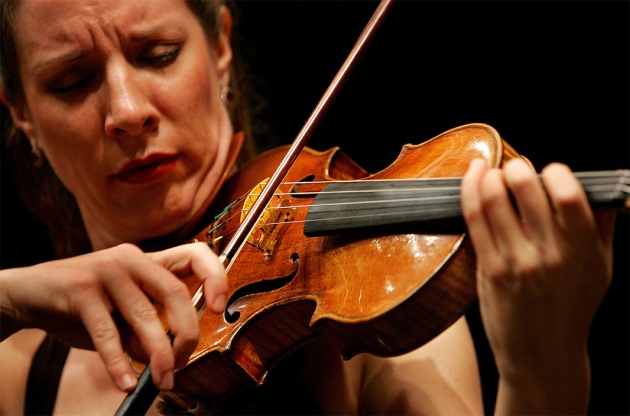 Something old, something new

For a long time, the alleged superiority of Strads led to a focus on the 'why?'. What was the secret of the Stradivari family (Antonio was just the most celebrated of a renowned family of instrument-makers)? The choice or treatment of wood2, 3? A special varnish4? Meanwhile, acoustic scientists have struggled to find a distinctive sonic signature of the instruments’ tone5.

Fritz and her colleagues reported one of the most telling results in 20126. They had 21 experienced, blindfolded violinists play Stradivarius, Guarneri del Gesù (another old-instrument-maker of comparable repute) and high-quality modern instruments. Blind testing showed that the violin judged best by the players was a new one, and that the instrument judged worst was a Strad. And the musicians couldn’t reliably tell whether an instrument was new or old.

Some virtuosi were sceptical of such studies, conducted in a controlled setting with a dry acoustic. “What made the old instruments great was their power in a hall,” wrote violinist Earl Carlyss.

So in their latest study1, Fritz and colleagues blind-tested instruments in two concert halls in Paris and New York City. Expert players performed both solo and with an orchestra on old and new violins, including several by Stradivari. Listeners, including violinists, violin-makers, composers and music critics, were asked to rate the instruments according to how well their sound projected, and to give their overall preference.

The results were stark: new instruments were consistently preferred and judged to project better. At face value, this questions the wisdom of many violinists who strive to play on a Strad if they can.

The power of perception

The temptation now is to say that the superiority of Stradivari has been exposed as a fantasy by the power of science. But that would be mistakenly reductionist.

Fritz and colleagues are much more judicious with their words. This isn’t about whether Strads are “better” or not, they say — although they do suggest that we discard misty-eyed notions about the “secret of the Stradivari”. Rather, we can focus on what physical features of a violin more generally determine its playing qualities, regardless of age or heritage.

It’s also worth seeking to understand what violinists value most, as the researchers wrote in their earlier study6. A musician’s relationship with an instrument goes beyond measurable acoustic features, and can be deeply personal. This became painfully apparent when the prodigy Min Kym temporarily stopped playing and fell into a depression after her Stradivarius was stolen in 2010.

French-American violinist Stéphane Tran Ngoc, who took part in Fritz’s earlier blind tests, also says that handing a performer an unfamiliar instrument and assessing how good they make it sound might not do it justice. “It’s frequently necessary to spend much more time on old instruments in order to know how to make them sound good,” he says. “A great old Italian violin will develop and will sound better and better as it is played, unlike many of the modern instruments.”

He uses an old instrument himself. And when he played it while participating in the tests, he (and others) felt it sounded better than the other violins. But “of course that’s unfair”, he adds, “as I have played on my instrument for 25 years and know it very well.”

And let’s not forget that violinists are not playing blind, and neither are their audiences listening that way. If people think that a Stradivarius sounds sweeter, that needn’t be a delusion that acoustic science should undermine. Such psychological factors are known to influence perception, just as a wine might taste finer if you’re told it is a vintage.

Blind testing reveals unexpected preferences, but we can’t say that it makes them any more valid. It’s important when prejudices are unwelcome — for example, in auditions. But a musician who is convinced that their instrument sounds better is likely to perform better on it. And who wouldn’t welcome that?