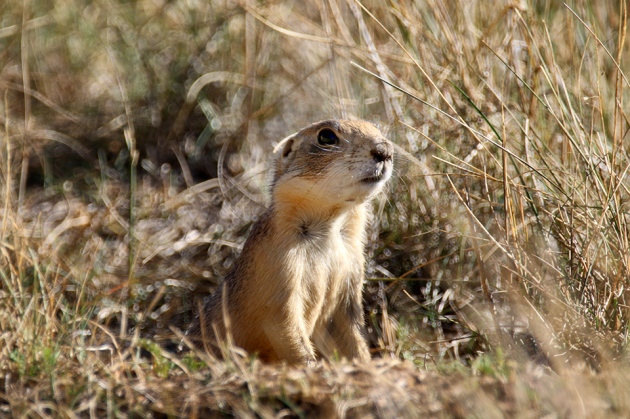 The Utah prairie dog is at the centre of a legal battle over endangered-species protections.

On 31 January, US President Donald Trump nominated Neil Gorsuch to the Supreme Court. Gorsuch, a conservative federal appeals court judge, would fill the vacancy left by the death of conservative justice Antonin Scalia in February 2016. Since then, the court has been split evenly between conservative and liberal justices; if Gorsuch is confirmed by the US Senate, the court's ideological centre would shift towards the conservative.

Nature looks at the science-related cases that are already on the court's agenda this year, and others that are likely to advance to the highest court in the land.

The court will hear a pair of patent cases dealing with biological drugs. Because these living products are impossible to copy exactly, companies seeking to make cheaper generic versions called biosimilars must prove that their manufacturing process is as safe and effective as that of the original product. Only then will the US Food and Drug Administration (FDA) allow a biosimilar onto the market.

The Supreme Court will decide whether such manufacturing processes themselves are trade secrets. In 2014, Sandoz, the generics arm of Swiss pharmaceutical giant Novartis, patented a generic version of the biological cancer drug filgrastim. Amgen, the company in Thousand Oaks, California, that makes filgrastim, then sued Sandoz, alleging that it infringed Amgen’s patents and failed to comply with legal requirements to disclose its manufacturing process to Amgen. Sandoz later countersued, challenging a federal requirement that a biosimilar maker wait six months after approval before marketing its therapy.

Because the FDA has already evaluated each company’s manufacturing process for safety and efficacy, the court’s ruling will have no bearing on patient care, says Arti Rai, a legal expert at Duke University in Durham, North Carolina. But the ruling could have a massive effect on the biologics market.

The court may also revisit when patents can be awarded for products made by naturally occurring processes. In 2012, the Supreme Court ruled that Prometheus Laboratories in San Diego, California, could not patent a kit that measured chemicals in a patient’s blood to determine whether a drug is working. And in 2013, it ruled that Myriad Genetics of Salt Lake City, Utah, could not patent a gene linked to breast cancer.

The decisions shocked the biotechnology industry, because they implied that a wide array of products could not be patented, and companies are now hoping that the Supreme Court will provide clarity by taking another case. Although in 2016 the court declined to hear a lawsuit over whether companies could patent prenatal tests that measure fetal DNA in maternal blood samples, Rai says that most experts in the field expect that it will accept a similar case soon.

The court agreed in January to hear a case that will determine which lower court should be the first to hear a lawsuit brought by developers challenging federal water-pollution regulations.

The case could also decide whether the Clean Water Act applies to small tributaries and watersheds that contain as much as 60% of the fresh water in the United States. The law was originally intended to protect lakes and other navigable waterways from pollution, but the administration of former president Barack Obama expanded it to cover more waters.

“It’s a big-time rule,” says Patrick Parenteau, an environmental lawyer at the Vermont Law School in South Royalton. “If you shrink the scope of the Clean Water Act, you're going to do incredible damage to water across the country.” The court’s ruling could affect nine lawsuits that are pending around the country in federal district courts. Among them is a case filed by Oklahoma attorney general Scott Pruitt — Trump’s pick to lead the US Environmental Protection Agency (EPA), which enforces the Clean Water Act.

Another case that could reach the court is a challenge to the Endangered Species Act that is now pending in Utah, Parenteau says. Property owners filed the suit to protest government restrictions on harassing or killing the endangered Utah prairie dog, even on private lands.

In 2014, a federal judge ruled that the Endangered Species Act cannot be used to protect the prairie dog. When the US Congress enacted the species law, it relied on a provision in the US Constitution that allows the government to regulate interstate commerce. Because the prairie dog appears to exist only in Utah, the interstate commerce provision — and thus, the endangered species law — does not apply, the federal judge said.

The US Fish and Wildlife Service, which administers the endangered-species law, has appealed against the ruling, but that court’s decision has been pending for a year. Parenteau says that the appeals' court's long deliberation time suggests that it may uphold the Utah judge's ruling. If the case ultimately reaches the Supreme Court, it could affect whether the federal government can protect other species that are only found in one state.

The most closely watched environmental case that might appear before the court deals with the Clean Power Plan, Obama’s 2015 policy to regulate greenhouse-gas emissions produced by power plants. Twenty-seven states have sued the EPA over the rule, saying that the agency’s authority to regulate air quality does not extend to greenhouse-gas emissions. (Trump’s EPA pick Pruitt filed suit on Oklahoma’s behalf.)

In February 2016, the Supreme Court forbade the EPA from enforcing the policy until the suit had been decided. A federal court in Washington DC heard the case in September 2016, and a ruling is expected any day. Jonathan Adler, a legal expert at Case Western Reserve University in Cleveland, Ohio, says that the court is widely expected to side with the EPA, in which case the states would almost certainly appeal to the Supreme Court.

Trump has promised to repeal the Clean Power Plan, and his administration is not expected to defend the regulations in court. But the president cannot reverse the regulations himself without providing a valid, non-political reason, Adler says, citing a 1983 Supreme Court ruling. Formulating such a reason could take Trump’s EPA a great deal of time, and it may not finish before the Supreme Court rules on the pending case.

Either way, Adler says, the legal fight over the Clean Power Plan is likely to extend for years, and the plan is unlikely to survive in its current form.

This story misstated Patrick Parenteau's affiliation. He is at the Vermont Law School, not the University of Vermont.