Gender equality in science made headlines repeatedly this year. Nobel-prizewinning biochemist Tim Hunt made his ill-advised quip about women in labs; Shrinivas Kulkarni, an astrophysicist at the California Institute of Technology, called astronomers and their telescopes “boys with toys”; and in a much more serious matter, astronomer Geoff Marcy resigned from his post at the University of California, Berkeley, after public disclosure that he had sexually harassed female students. More quietly, there were rumours that at least three astronomers had been dismissed, and in some cases scrubbed from institutional websites.

None of these incidents were in any way related to motherhood, which was — and is — too often invoked to explain the dearth of women in science. (Gender is of course neither binary nor necessarily stationary; that I talk about 'women' and 'men' in this piece is not meant to obscure that point.)

As the mother of two amazing women, I would say that family issues are the least of the problem. It is unquestionably true that employers must improve support of families, with progressive policies on paid parental leave, care of the elderly, high-quality on-site child care, and tenure 'clock stops'.

But if inequality were all about family issues, why has women's participation in the life sciences grown so much faster over the past three decades than in physics or engineering? (see 'Running the gauntlet'). Why, in the United States, where I have worked in the scientific enterprise for nearly four decades, does astronomy have twice the percentage of women that physics does, despite requiring a very similar skill set? And if fixing the disproportionate burden of family care on women is all that matters, countries that have strong family-support systems — such as Sweden and Denmark — would have greater participation of women in science than in the United States, which languishes near the bottom of parental pay and leave leagues. 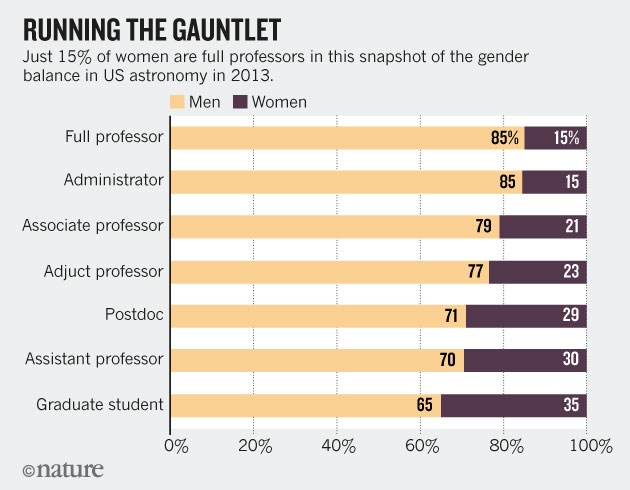 Clearly, strong family-support policies are not the whole story.

Every major criterion on which scientists are evaluated, for hiring, promotion, talk invitations or prizes, has been shown to be biased in favour of (white) men. These include authorship credit2, paper citations3, funding4, recruitment5, mentoring and tenure. For example, although women publish fewer papers than men, there is some evidence that on average they are longer and more complete, and that this difference vanishes if one corrects for funding level and research-group size.

Women in male-dominated careers face obstacles that are often invisible and usually unacknowledged (just read Virginia Valian's 1998 book, Why So Slow? The Advancement of Women (MIT Press) and the papers described in her annotated bibliography). I have experienced many of these obstacles. People often have a just a little more certainty that the man is a genius and a little more doubt that the woman will make the grade. Her contribution to the paper — was it her student's brilliance or her husband's work? Her work is risky and unlikely to succeed whereas his is revolutionary; hers is pedestrian while his is reliable. Men have champions; women have critics.

Letters of recommendation for women are shorter than letters for men. They are less detailed and are filled with 'grindstone' adjectives (such as 'hard-working', 'determined' and 'dependable') rather than superlatives ('brilliant', 'creative', 'outstanding'). They are more likely to mention personal characteristics ('likeable', 'friendly', 'helpful') and more likely to mention gender and parenting issues (for instance, “she did all this work while having two children”). These differences hold true whether the writer is male or female6. Women are invited to give fewer talks and asked to sit on fewer scientific organizing committees and prestigious committees — yet they do much of the everyday committee work.

As a senior female astrophysicist, my proposals to use the Hubble Space Telescope — equivalent to winning funding of US$100,000 if granted — are less likely to succeed than those of my male colleagues (or my junior female colleagues)7. The difference is not statistically significant in any one review cycle, but after 25 years, it is clear that senior women are systematically less successful than their male counterparts, at a level of a few per cent per cycle. This is striking because almost all Hubble proposals are written by large teams that include both men and women, so the quality of the text does not depend on the gender of the principal investigator.

I am less likely to be nominated for a prize or honour8. I am more likely to be paid less (and was, for many years). In my experience, women are more likely to report having received gratuitously rude referee reports on their papers. (Whether the criticism is nastier or the sting is felt more acutely is not clear.) 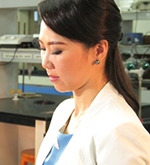 The minority minority in the developing world

Meanwhile, in my experience, women spend much more time teaching, mentoring and doing outreach than do their male colleagues. And this work is often not valued. One woman I know was described as having succeeded in her research “despite all the time she spent on outreach”, as though her choice to attract girls to science was misguided. I would have described her as a superstar, who accomplished a very difficult (what some might call a 'highly risky') scientific measurement while creating an innovative new course and investing time in the future of her discipline.

And we wonder why the attrition of women remains greater than attrition of men at every level in the scientific hierarchy.

We should not forget that within living memory many Western democracies overtly — not just covertly — discriminated against women. Before 1969, some of the best US research universities did not admit women as undergraduates (two being Yale University in New Haven, Connecticut, and Johns Hopkins University in Baltimore, Maryland, where I was educated). Equal-pay acts were not passed until 1963 in the United States, 1970 in the United Kingdom, and decades later in other parts of Europe. As recently as 1990, there remained elements of voting that were open only to men in one part of Switzerland. When I first applied for assistant-professor positions about 25 years ago, some universities still had anti-nepotism rules, which were a real problem for scientific couples.

But gender inequality today is not about discrimination in the past. In the United States, institutes established since the 1980s are just as biased as the oldest in the land. California's Silicon Valley, which has flowered in the past few decades, has an abysmally low number of women in business leadership positions.

I have heard colleagues say, “women don't want faculty jobs — the work is too hard, it's incompatible with having a life”. Apart from this being nonsense, the answer is not to ignore half of the brains. Rather, it is to create a more humane workplace, in which impact and quality of work have greater weight than monastic devotion and 100-hour work weeks. 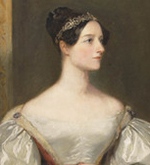 What prompts people to conclude that women don't want faculty jobs? It is, in part, because the presence of women in the applicant pool for such jobs can be much lower than the fraction of women who are qualified for the positions — simply because men apply to many more jobs, on average, than women do. The low fraction of women has nothing to do with lack of interest.

Social-science research on confidence hints at why this might be the case (see, for example, ref. 9). Women tend to apply only to jobs for which they feel they have a fighting chance, either because the qualifications listed in the job advertisement match theirs or because the institution is one that they think they are good enough to join; men apply regardless. Recruiters should note that female applicants, being more selective in their attempts, are likely to be well suited to the position that they have applied for.

When I give a colloquium at a university whose physics department lacks female faculty members, I often ask: “Have you thought about hiring women?” The answer is usually earnest: “Oh yes, we definitely want to do that, but we want to hire the best.” Do my hosts realize how insulting it is to imply those two goals are mutually exclusive?

Recently, a colleague worried openly about young men who, in the face of added competition from women, might not land that coveted assistant-professor position. If a woman of equal ability were hired affirmatively in place of a man, he suggested, the unsuccessful male applicant should be compensated with $100,000. My jaw dropped. By that reasoning, shouldn't we compensate the thousands of women or other underrepresented scientists who were preferentially not hired over the past 50 years, despite being as talented as — or substantially more so than — the men who got the jobs?

Rather than focusing on what young men are losing when they have to compete with talented women, we should be asking what research is losing by not having the full participation of women. Sometimes, science feels increasingly homogenous, with professors training graduate students to think like them, and sameness being valued. 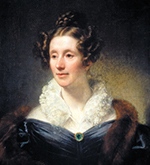 In retrospect: Mary Somerville's On the Connexion of the Physical Sciences

As I (and many others) have pointed out several times, the failure to hire women and minorities in science is a guarantee that the best are not being hired. The old canard that there aren't any women or there aren't any people of colour does not hold up. When you look, they are there. And they bring talent that we desperately need, not to mention huge value as role models for students, who are so much more diverse a group than the faculty.

Many practical steps increase the likelihood of hiring and retaining women and other underrepresented scientists. For example, before evaluating applicants for a position, a search committee should agree on the set of desired qualities (subfield of research, teaching ability, publication record, contribution to diversity, ideas for student projects, research funding, and so on). When each candidate is evaluated in those categories, bias in the outcome is reduced.

Institutions can tone down elitist language in job advertisements without hurting their programme — status depends on quality, not adjectives. Women can be more likely to apply to institutions that describe themselves as 'collegial' and 'student-oriented' than 'top-rated' and 'world-class'.

Wherever possible, reviews should be done blind, so the reviewer does not know whom they are reviewing. A well-known example of the effectiveness of this technique is in orchestra auditions, where the proportion of women hired shot up when auditions were performed anonymously behind a curtain.

The literature abounds with other best practices for academia (see the United Kingdom's Athena SWAN Charter or the US National Science Foundation's ADVANCE programme).What is missing is not ways to do better — but the recognition that we must change.

Different ideas lead to scientific advances. Rome projected influence over a great empire, but did not foster a distinguished scientific enterprise: the greatest discoveries tended to come at the intersections of trade routes. Sameness leads to stagnation. We simply have to try. Harder.