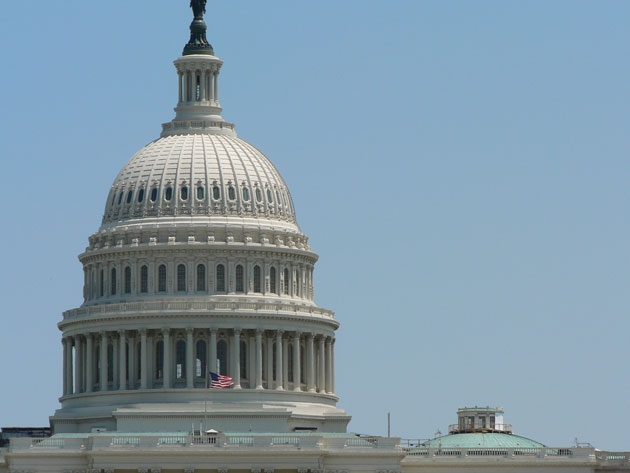 The US Congress is aiming to pass a spending budget before the end of the week.

US science agencies can start to pretend that 2013 never happened.

On 13 January, Democratic and Republican negotiators from Congress released a US$1.1-trillion spending budget for fiscal-year 2014, which would fund the government through 30 September. The agreement brings science agencies roughly back to where they were in 2012, before sequestration took hold with automatic spending cuts that chopped 5% off of agency budgets in 2013.

“Given the tough environment, I would definitely call this progress,” says Matt Hourihan, director of the research and development budget and policy programme at the American Association for the Advancement of Science in Washington DC. “The big takeaway is that there is a lot of funding here that is getting recovered.”

Even the slightest of bumps would have been a major victory at the National Institutes of Health. The agreement boosts agency spending by nearly $750 million over 2013 levels. Yet the $29.9 billion budget is still nearly $1 billion shy of 2012 levels, and falls $1.27 billion short of what the administration of President Barack Obama requested in April.

Some advocates are disappointed that the agency could not get all the way back to its 2012 levels. “The proposed package won’t adequately reverse the damage done by last year’s budget sequester,” said Carrie Wolinetz, president of United for Medical Research in Washington DC, in a statement. Others see a light at the end of the tunnel. “It’s a really good start in the right direction,” says Jennifer Zeitzer, director of legislative affairs at the Federation of American Societies for Experimental Biology in Washington DC.

Although the budget funds the Obama administration’s pet Brain Research through Advancing Innovative Neurotechnologies Initiative (BRAIN), it does not specify whether the initiative will get the $40 million that had been requested. And the Cures Acceleration Network at NIH’s new translational centre gets only $10 million — far short of the $50 million requested.

*2013 figures include the roughly 5% across-the-board cut arising from the sequester.
**Includes one-time transfer of $85 million in user fees.

Source: US Congress; White House Office of Management and Budget.

The National Science Foundation would receive $7.2 billion, which boosts the agency by $70 million over its 2012 level. “They’ve recovered their funding plus a small increase,” says Hourihan. The division that funds the agency’s capital projects would get $200 million — allowing a construction start this year for the Large Synoptic Survey Telescope, a major astronomy project in Chile. “It’s not quite as good as I would have liked to have seen, but it could have been worse,” says Samuel Rankin, who handles government affairs for the American Mathematical Society in Washington DC.

The budget plan moves now to the House of Representatives, which is expected to vote on the bill on Wednesday. The Senate is expected to take it up shortly thereafter. Given that the bill has already been negotiated by both parties, it should pass both chambers by the end of the week. Stefano Bertuzzi, executive director of the American Society for Cell Biology in Rockville, Maryland, is glad to see that an era of stand-offs, shutdowns and sequestration has come to an end — for the moment. “Thumbs up for Congress. Is the horror movie of slashing biomedical research over?”

The table has been updated to include the 5% sequester cuts in the 2013 figures for the NIH, CDC, FDA and NASA.