Newspapers in the United Kingdom have jumped on the news that patients will soon be able to purchase ‘intelligent pills’ containing sensors to monitor their medication use. Nature looks at what these pills can do.

What is the latest news?

Proteus Biomedical, a company based in Redwood City, California, announced on 13 January that it would be launching a “digital health product” in the United Kingdom in collaboration with the pharmacy chain Lloydspharmacy. 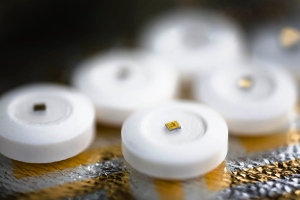 Pills housing tiny microchips are able to monitor a patient's use of medications.

This product, called Helius, will include “sensor-enabled tablets” to monitor patients' medication use. Compliance with doctors’ instructions has been identified as a problem area in medicine, especially when patients are prescribed multiple drugs that may need to be taken at different times.

“The most important and basic thing we can monitor is the actual physical use of the medicine,” says Andrew Thompson, chief executive of Proteus. “We have tested the system in hundreds of patients in many different therapeutic areas. It’s been tested in tuberculosis, in mental health, in heart failure, in hypertension and in diabetes.”

For the system, Proteus has designed sensors called ‘ingestible event markers’, which can be taken with pills or incorporated directly into medicines as part of the manufacturing process. In this system, the sensors will be embedded in a placebo to be taken alongside a medicine. Lloydspharmacy hopes to make the system, which will be marketed to people with chronic conditions, available from September.

How do the sensors work?

They are activated by stomach acid and are powered much like 'potato batteries', in which two different metals generate a current when inserted into the vegetable.

Each sensor contains a tiny amount of copper and magnesium, says Thompson. “If you swallow one of these devices, you are the potato that creates a voltage, and we use that to power the device that creates the signal”.

The digital signal, he adds, cannot be detected except by a device that attaches to the patient’s skin, much like a bandage. This device also monitors heart rate, respiration and temperature, showing how the patient responds to the medication. These data can then be relayed to a patient’s mobile telephone and shared with whomever the patient chooses.

What similar technologies are already out there?

Ingestible sensors have a long history. NASA developed ingestible thermometers in the 1980s to measure astronauts’ core temperatures. These thermometers have lately been adopted by some athletes. Other researchers have created cameras in pills to image the digestive system from the inside.

"There are a number of companies that have looked at putting technologies on pills for sensing inside the body," says Jonathan Cooper, a biomedical-engineering researcher at the University of Glasgow, Scotland, and founder of the medical company Mode Diagnostics.

However, he says, "as you add sensor functionality you have greater power demands and have to make the pill larger”. Larger pills are harder to swallow and camera pills may, in rare cases, become stuck in the digestive tract.

Cooper says that the claims for the new technology are "potentially very exciting" but notes that internal monitoring technology also has to compete with sensor systems based outside the body. His research team previously attempted to develop a pill for monitoring minute traces of blood in the lower colon, to screen for bowel cancer. But eventually, he says, they found it easier to adapt their technology to monitor stool samples.