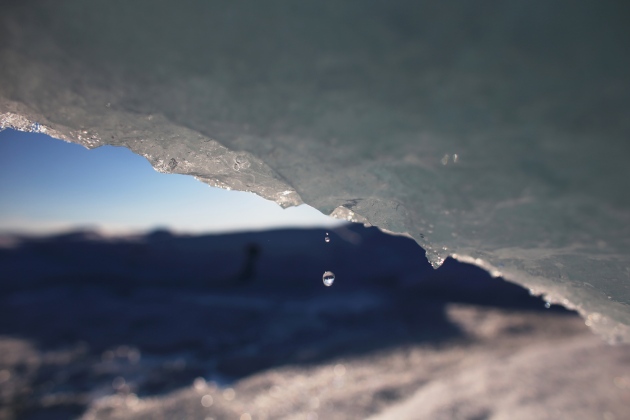 As the Greenland ice sheet thaws, it is helping to raise the world's sea levels.

The numbers didn’t add up. Even as Earth grew warmer and glaciers and ice sheets thawed, decades of satellite data seemed to show that the rate of sea-level rise was holding steady — or even declining.

Now, after puzzling over this discrepancy for years, scientists have identified its source: a problem with the calibration of a sensor on the first of several satellites launched to measure the height of the sea surface using radar. Adjusting the data to remove that error suggests that sea levels are indeed rising at faster rates each year.

“The rate of sea-level rise is increasing, and that increase is basically what we expected,” says Steven Nerem, a remote-sensing expert at the University of Colorado Boulder who is leading the reanalysis. He presented the as-yet-unpublished analysis on 13 July in New York City at a conference sponsored by the World Climate Research Programme and the International Oceanographic Commission, among others.

Nerem's team calculated that the rate of sea-level rise increased from around 1.8 millimetres per year in 1993 to roughly 3.9 millimetres per year today as a result of global warming. In addition to the satellite calibration error, his analysis also takes into account other factors that have influenced sea-level rise in the last several decades, such as the eruption of Mount Pinatubo in the Philippines in 1991 and the recent El Niño weather pattern.

The view from above

The results align with three recent studies that have raised questions about the earliest observations of sea-surface height, or altimetry, captured by the TOPEX/Poseidon spacecraft, a joint US–French mission that began collecting data in late 1992. Those measurements continued with the launch of three subsequent satellites.

“Whatever the methodology, we all come up with the same conclusions,” says Anny Cazenave, a geophysicist at the Laboratory for Studies in Space Geophysics and Oceanography (LEGOS) in Toulouse, France.

In an analysis published in Geophysical Research Letters1 in April, Cazenave’s team tallied up the various contributions to sea-level rise, including expansion resulting from warming ocean waters and from ice melt in places such as Greenland. Their results suggest that the satellite altimetry measurements were too high during the first six years that they were collected; after this point, scientists began using TOPEX/Poseidon's back-up sensor. The error in those early measurements distorted the long-term trend, masking a long-term increase in the rate of sea-level rise.

The problem was first identified in 2015 by a group that included John Church, an oceanographer at the University of New South Wales in Sydney, Australia. Church and his colleagues identified a discrepancy between sea-level data collected by satellites and those from tide gauges scattered around the globe2. In a second paper published in June in Nature Climate Change3, the researchers adjusted the altimetry records for the apparent bias and then calculated sea-level rise rates using a similar approach to Cazenave’s team. The trends lined up, Church says.

Still, Nerem wanted to know what had gone wrong with the satellite measurements. His team first compared the satellite data to observations from tide gauges that showed an accelerating rate of sea-level rise. Then the researchers began looking for factors that could explain the difference between the two data sets.

The team eventually identified a minor calibration that had been built into TOPEX/Poseidon's altimeter to correct any flaws in its data that might be caused by problems with the instrument, such as ageing electronic components. Nerem and his colleagues were not sure that the calibration was necessary — and when they removed it, measurements of sea-level rise in the satellite's early years aligned more closely with the tide-gauge data. The adjusted satellite data showed an increasing rate of sea-level rise over time.

“As records get longer, questions come up,” says Gavin Schmidt, a climate scientist who heads NASA’s Goddard Institute for Space Studies in New York City. But the recent spate of studies suggests that scientists have homed in on an answer, he says. “It’s all coming together.”

If sea-level rise continues to accelerate at the current rate, Nerem says, the world’s oceans could rise by about 75 centimetres over the next century. That is in line with projections made by the Intergovernmental Panel on Climate Change in 2013.

“All of this gives us much more confidence that we understand what is happening,” Church says, and the message to policymakers is clear enough. Humanity needs to reduce its output of greenhouse-gas emissions, he says — and quickly. ”The decisions we make now will have impacts for hundreds, and perhaps thousands, of years.”