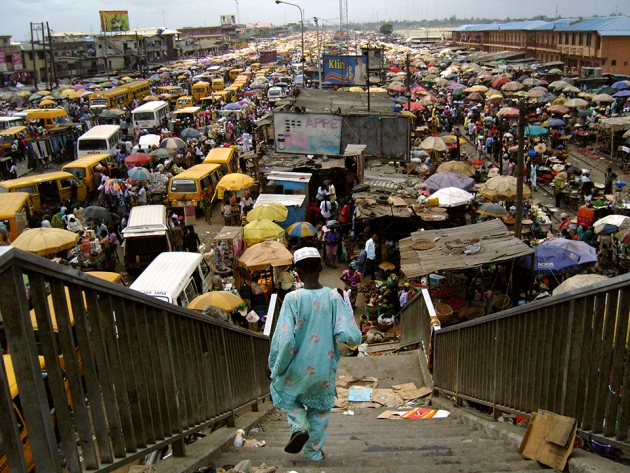 A crowded market in Lagos. Satellite-image-processing technology can estimate population density from the layout of streets and buildings.

Nigerian health officials won’t have to rely on flawed, decade-old census data when they plan deliveries of the measles vaccine next year. Instead, they will have access to what may be the most detailed and up-to-date population map ever produced for a developing country. Created by the Bill & Melinda Gates Foundation in Seattle, Washington, and delivered to Nigerian officials on 1 May, the map is based on a detailed analysis of buildings in satellite imagery and more than 2,000 on-the-ground neighbourhood surveys.

It is one of several projects that are leveraging remote-sensing data and modern computer-learning algorithms to chart human settlements around the globe with unprecedented precision. Researchers hope that these data will enable better management of public health, infrastructure and natural resources — and improve planning for emergencies. This is especially true in developing countries, where census estimates are notoriously unreliable and outdated.

“If you don’t know how many people are where, you cannot have any kind of structured, organized plan for changing people’s lives,” says Budhendra Bhaduri, who heads the Urban Dynamics Institute at Oak Ridge National Laboratory in Tennessee and is a collaborator on the Gates Foundation project.

Researchers have been laying the groundwork for these advanced maps for two decades. Oak Ridge began using satellite imagery in the late 1990s to improve population estimates; within a few years, it was creating daytime and night-time maps that showed where people in the United States lived and worked. But better algorithms and increased computing power have made it possible to apply this approach globally in the past several years.

“The data was always there, but nobody was able to process it,” says Martino Pesaresi, a remote-sensing expert at the European Commission’s Joint Research Centre in Ispra, Italy. In 2014, Pesaresi’s team used an automated system to map settlements across the world using images from US Landsat satellites. The group has since analysed selected imagery back to 1975, and is publishing annual updates with a resolution of 10 metres using optical and radar data from the European Sentinel satellites.

Facebook has also joined the mapping push, after announcing plans in 2014 to expand Internet access worldwide using drones and satellites. The social-media giant purchased half-metre-resolution commercial satellite imagery of 30 countries, and developed an algorithm to identify human-built structures before partnering with Columbia University in New York City to overlay census data. Columbia has released population maps for eight of the countries and plans to finish the remainder within a few months.

“The Facebook algorithm is finding exactly what they want to find, which is rural populations,” says Greg Yetman, associate director for geospatial applications at Columbia’s Center for International Earth Science Information Network. One advantage of this approach, he says, is that it doesn’t require on-the-ground surveys like those conducted by the Gates Foundation.

The Gates Foundation began its mapping project after encountering problems while distributing polio vaccines in Nigeria: millions of doses would be sent to areas where they weren’t needed and would disappear, while other areas suffered shortages. The foundation teamed up with researchers at Oak Ridge and the University of Southampton, UK, in 2013 to produce the first high-resolution maps of Nigeria’s northern states. The group completed those in 2015, and next month it group will make public its first country-wide map.

The plot reveals villages that weren’t included in Nigeria’s most recent census, in 2006, and shows that many urban areas are more populated than the census data indicated, says Vince Seaman, an epidemiologist and interim deputy director of data and analytics for global develop-ment at the Gates Foundation. “This has the potential to change the whole game,” he says. “For all of the different vaccines in Nigeria, it could save US$1 billion in a space of a few years.”

What sets the foundation’s project apart is how it places people on its map. Rather than relying on census data, Oak Ridge researchers used computer algorithms to identify different types of neighbourhood: neat street grids and large structures often indicate wealthier areas, whereas clusters of disorganized lines can be used to identify slums and informal settlements (see ‘Picturing population’). Researchers at the University of Southampton then used those data to design household-population surveys for each settlement type; the results of the surveys were used to calculate population densities. 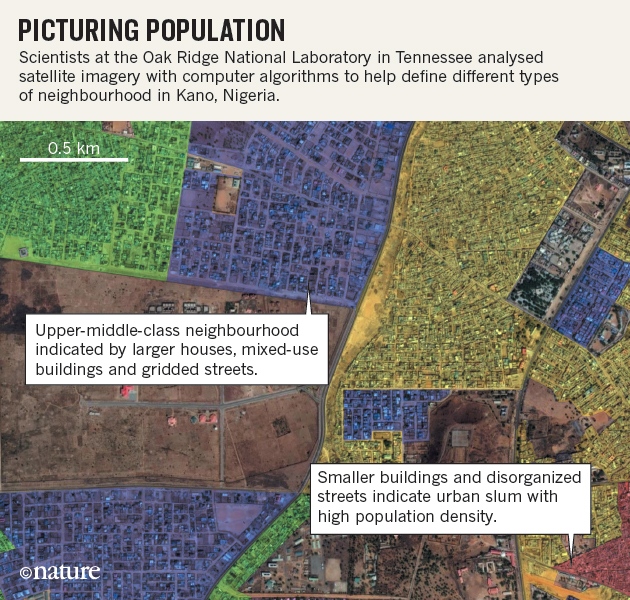 Seaman says it will cost between $1 million and $2 million per country to repeat this exercise elsewhere. The Gates Foundation is now working with the UK Department for International Development to expand its mapping project to Ethiopia and the Democratic Republic of the Congo.

Seaman says that the goal moving forward must be to help developing countries collect census data referenced to geographic location to capture a true snapshot of their populations. Ethiopia is planning to do that later this year, with Nigeria following in 2018. Seaman hopes that the Gates Foundation mapping project will bolster those efforts. If it succeeds, he says, “that would make our stuff obsolete”.