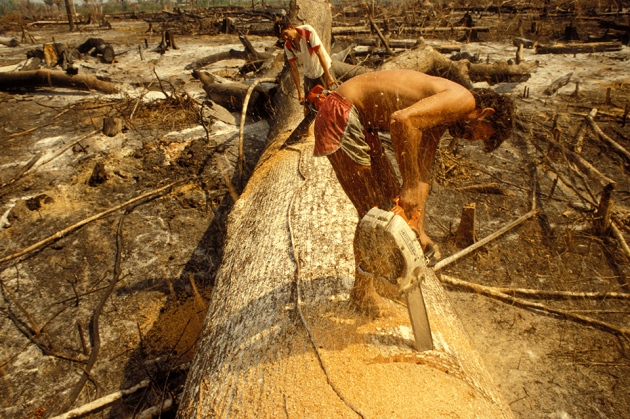 Logging in the Brazilian Amazon has decreased in the past decade, but is still a problem.

A satellite-based alert system could prove a potent weapon in the fight against deforestation. As few as eight hours after it detects that trees are being cut down, the system will send out e-mails warning that an area is endangered. That rapid response could enable environmental managers to catch illegal loggers before they damage large swathes of forest.

“It’s going to be very, very helpful,” says Brian Zutta Salazar, a remote-sensing scientist at the Peruvian Ministry of the Environment in Lima.

Satellites are already valuable tools for monitoring deforestation; in recent decades, they have delivered consistent data on forest change over large and often remote areas. One such effort, the Real Time System for Detection of Deforestation, or DETER, has helped Brazil’s government to reduce its deforestation rate by almost 80% since 2004, by alerting the country’s environmental police to large-scale forest clearing.

But DETER and other existing alert systems can be relatively slow to yield useful information. They use data from the Moderate Resolution Imaging Spectroradiometer (MODIS) on NASA’s Terra satellite, which at its top resolution produces images with pixels covering an area 250 metres on each side, roughly equivalent to 10 football pitches. This is too big to spot small changes in land cover, so it can take computer programs that process MODIS data weeks or even months to detect that a forest is being cleared. “By the time MODIS picks up on it, it’s almost too late,” says Peter Ellis, a forest-carbon scientist at the Nature Conservancy, a conservation group in Arlington, Virginia.

Seeking to provide a sharper view, geographer Matthew Hansen of the University of Maryland in College Park and his colleagues published maps showing year-to-year changes in global forest cover from 2000 to 2012 (M. C. Hansen et al. Science 342, 850–853; 2013). The researchers relied on data from NASA’s two active Landsat satellites, which together photograph every spot on Earth every eight days. Each pixel in a Landsat image is 30 metres on each side — roughly the size of a baseball diamond. This means that an area covered by just one MODIS pixel is captured in roughly 70 smaller Landsat pixels.

Hansen and his team wrote data-processing software that can use these higher-resolution images to recognize a disturbance as small as a road snaking its way through a previously untouched forest, something that often appears before clear-cutting begins. “It’s much more advantageous to detect a smaller clearing first, and to figure out what that is, compared to finding something large,” says Salazar.

Using this system, Hansen and his colleagues plan to start updating the forest-change maps on their website more frequently — just hours after new deforestation is detected. A paper detailing the team’s methodology has been accepted for publication in Environmental Research Letters. 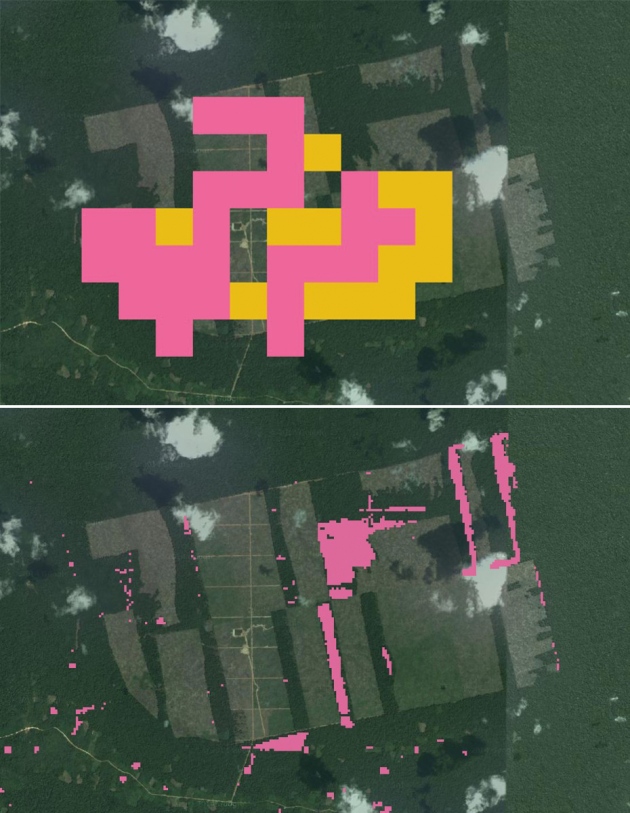 The World Resources Institute, an environ­mental group in Washington DC, will provide access to the deforestation alerts on its Global Forest Watch website, beginning in early March. When trees disappear between successive Landsat passes, a pixel representing that location on an online map will turn red. Users will also be able to sign up to receive e-mails when land cover changes in a specific area, such as a park, an indigenous territory or a privately owned forest, which could facilitate rapid responses to small-scale deforestation.

But the alert system is limited in some important ways. Landsat detects only visible light and short-wave infrared, so it cannot see through clouds. This means that in the planet’s cloudiest areas — such as many tropical rainforests — the satellites could go months without collecting images of the underlying land. Nor can the probes reliably detect damage from activities that leave the forest canopy intact, such as selective logging and the gathering of wood for fuel.

Because such forest degradation can yield carbon emissions that approach half those from all-out deforestation, tracking this damage is important in understanding the role of forests in climate change, says Alessandro Baccini, a remote-sensing expert at the Woods Hole Research Center in Falmouth, Massachusetts.

And then there is the difficulty of ensuring that deforestation alerts reach not only govern­ment officials, but also people who live in or near affected forests. “We will have faster detection, but OK, so what, what do you do next?” says Carlos Souza, a research scientist at Imazon, an environmental research institute in Belém, Brazil. He would like to see residents of remote forests trained to check the veracity of satellite-driven alerts on the ground. That could also help countries to improve their estimates of greenhouse-gas emissions from tree loss.

In the meantime, the Landsat-based alerts represent a significant step forward for the fight against deforestation, says Frances Seymour, a senior fellow at the Center for Global Development, a think tank in Washington DC. “In the context of law enforcement, timeliness is every­thing,” she says. “A couple weeks later, not only is the forest gone, but so is the equipment and all the evidence you might be able to use for a successful prosecution.”