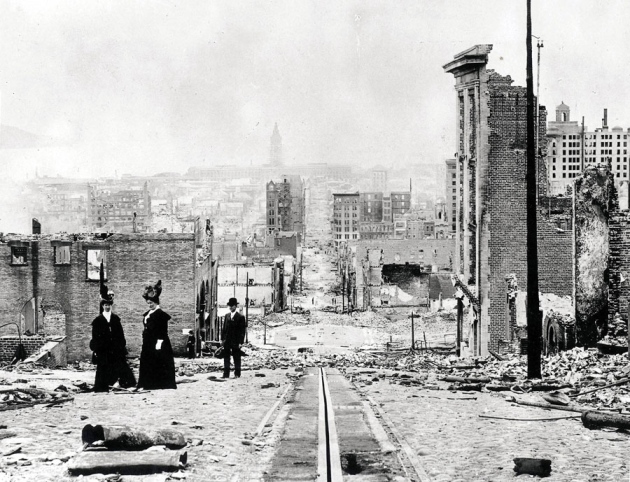 Destruction in San Francisco was widespread after a huge earthquake hit the region in 1906.

Seismic activity in the San Francisco bay region of California appears to follow a cyclical pattern, and the region may be due for a big quake or a cluster of large earthquakes in coming decades, geologists report today in the Bulletin of the Seismological Society of America1.

The researchers studied historical earthquake records from 1776 to 2012 as well as palaeoseismic data, which come from radiocarbon dating and evidence of movement in the layers of rock at fault sites, dating back to 1600. The authors suggest tremors in the region follow a cyclical pattern, pointing to a cluster of earthquakes between 1690 and 1776 followed by a period of low seismicity that persisted until the big quake in 1906.

“The idea is that stress builds up, is released and builds up again,” says David Schwartz, a geologist with the US Geological Survey in Menlo Park, California, who led the study. When the 1906 earthquake occurred, stress was released and the frequency of quakes in the region dropped dramatically, leaving the region relatively unscathed for more than a century, he added. (The 1989 Loma Prieta earthquake caused widespread damage in the San Francisco area but occurred on a different fault and did not actually rupture the ground surface; hence there was little to actually study, says Schwartz.)

“Identifying something that looks like a pattern becomes very interesting because this behaviour can be extrapolated into the future,” says Yuri Fialko, a geophysicist at the Scripps Institution of Oceanography in La Jolla, California, who was not involved in the study.

But Fialko warns the study does not prove definitively that the seismicity is cyclic. Palaeoseismic data can be unreliable or incomplete, as they are based on interpretations of displacement seen in layers of rock and soil. Historical records do not extend back far enough to demonstrate a cyclic trend.

“This is probably the best data set and the best analysis that one can get,” says Fialko. “Instrumental records and palaeoseismic records are always associated with uncertainty.”

Computer simulations of earthquakes suggest that it takes about ten cycles to establish a pattern of stress build up and release, says John Rundle, a geophysicist at the University of California, Davis. The roughly 400 years of recorded history and palaeoseismic data that the new study examined amounts to roughly one or two cycles of activity, he adds.

Still, Schwartz says, “we’ve accumulated enough stress in the Bay Area’s crust that we should start to see the occurrence of more larger earthquakes, and that could be at any time.”