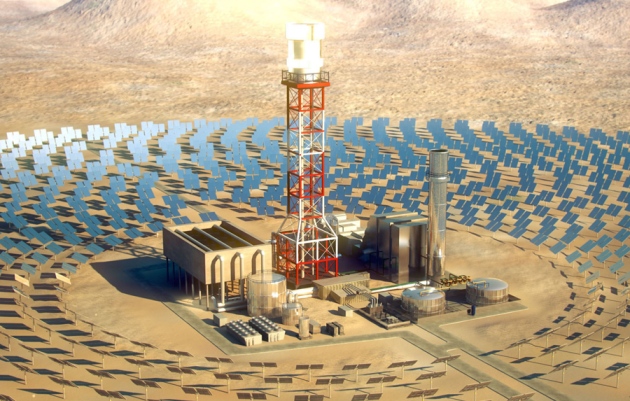 Dimming prospects for solar energy have caught up with a massive renewable-energy project planned for the Sahara Desert. By 2050, according to its backers, DESERTEC, a network of solar plants and other renewable sources scattered across North Africa and the Middle East, could generate more than 125 gigawatts of power that could be used locally or delivered to Europe through high-voltage direct-current cables beneath the Mediterranean Sea. But one of its major backers, Siemens, based in Munich, Germany, now says that it will leave Dii, the consortium trying to advance DESERTEC, by the end of the year.

“We see our part in Dii as done,” says spokesman Torsten Wolf of Siemens, one of 13 founding partners of the consortium, which is also based in Munich.

Siemens also said that it will pull out of the solar-energy business altogether. Its decision was made in response to falling government subsidies for solar energy and a collapse in the price of solar equipment. But to DESERTEC’S critics, Siemens’ exit also adds to doubts about the plan, which is expected to cost hundreds of billions of dollars. “DESERTEC is an ambitious attempt to do every­thing at once,” says Jenny Chase, an analyst at Bloomberg New Energy Finance in Zurich, Switzerland. “I think it’s something that will be achieved organically, bit by bit, which will probably be cheaper, easier and achieve the same results.”

DESERTEC’s origins lie with retired particle physicist Gerhard Knies, who, after the 1986 Chernobyl nuclear disaster, had the idea of harvesting the Sahara’s plentiful sunshine for energy. With the help of Prince El Hassan Bin Talal of Jordan, Knies brought together research institutes in Germany and North Africa, including some in Morocco, Algeria and Egypt, to start looking into the idea.

“For generating electricity from renewable, carbon-free sources, the economics makes more sense if we go to the Middle East and North Africa,” says Ernst Rauch, Dii representative for the insurance company Munich Re, one of the consortium’s shareholders.

Siemens provided funds and technical expertise for preliminary studies, and in June, Dii published the result: a report that maps out the most cost-effective distribution of renewable-energy sources in 2050, based on simulations run by the Fraunhofer Institute for Systems and Innovation Research in Karlsruhe, Germany (see ‘Power play’). 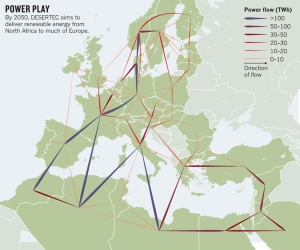 Paul van Son, Dii’s chief executive, says that he is not concerned about losing Siemens for the next phase of the work, a detailed look at specific projects. “It will not really affect us,” he says, pointing out that Siemens is only one of dozens of shareholders and partners.

Siemens’ exit from solar energy is an about-face for the company, which had been investing in solar thermal energy, long considered a key feature of DESERTEC, after acquiring the solar-thermal equipment designer Solel, based in Beit-Shemesh, Israel, in 2009. Plants built with this technology use mirrors to concentrate sunlight on material that can absorb its heat. When released, the heat boils water, creating steam that can drive an electricity-generating turbine.

Solar thermal plants have become increasingly hard to sell in recent years, says Wolf, owing to the falling price of a competing technology, silicon solar panels. Between 2006 and 2012, the cost of these photovoltaic panels fell by around 65%, partly as a result of a glut of solar cells on the market. Waning government subsidies for solar installations have made staying in the business even harder by lowering the demand for solar power, says Matthew Feinstein, an analyst at Lux Research in New York.

“It’s been a bloodbath for the past year or so,” says Feinstein. Last December saw the bankruptcy of Berlin-based Solon, Germany’s first publicly traded solar company. Q.Cells, headquartered in Bitterfeld-Wolfen, one of the world’s top solar-cell producers, followed in March. Siemens’ exit from the business will deepen the gloom.

But Thiemo Gropp, director of the non-profit DESERTEC Foundation that set up Dii, says the fall in costs that drove Siemens out of the business will ultimately benefit the project. “Other companies will fill this gap with their own products,” he says. DESERTEC has endorsed one such project, a solar thermal plant planned for a site in Tunisia. Nur Energie, the London-based company behind the undertaking, hopes to supply Italy with power from the plant through an underwater cable.

And Siemens’ relationship with DESERTEC may not be entirely over. The company says that it still supports the mission in principle, and may have something to offer down the road. Wind energy, for example, has taken on an increasingly important role in plans for DESERTEC, which hopes to tap into Africa’s coastal winds. And Siemens now plans to focus on its wind portfolio.

The company has already received its first turbine orders from Africa. Morocco, which hopes to generate 6 gigawatts of power annually from renewable sources by 2020, bought 44 or them, to be installed at two wind farms. Although the projects have not been officially endorsed by DESERTEC, Wolf says that they fit the spirit of the endeavour perfectly.