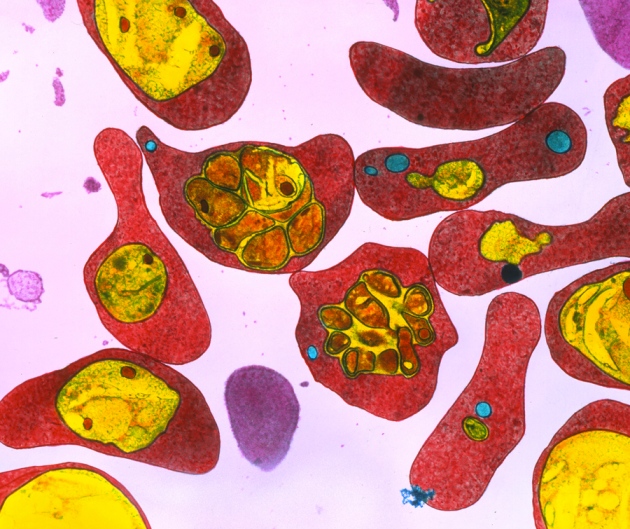 A method that can spread genetic changes rapidly through populations could aid the fight against the malaria parasite, shown here infecting red blood cells.

A genome-editing method that could allow researchers to rapidly engineer entire populations has had an important upgrade. A US team has added safeguards to reduce the chances that such ‘gene drives’ will escape the laboratory, and found a way to erase the genetic mutations after they have spread.

Gene drives hold the potential to wipe out insect-borne diseases and can speed up some genetic studies in the laboratory. But if released into the wild — whether intentionally or not — gene drives could irrevocably scar entire ecosystems.

The safeguards, published today in Nature Biotechnology1, may calm some fears about the technology. One of the techniques provides a way of genetically separating the components that fuel a gene drive, so that the engineered mutation will not spread as rapidly through a population. Another is a molecular 'undo' button: sending a second gene drive out to undo the effects of the first.

“We have a responsibility to keep our experiments confined to the laboratory,” says Kevin Esvelt, an evolutionary engineer at the Wyss Institute for Biologically Inspired Engineering at Harvard University in Boston, Massachusetts, and an author of the paper. “The basic lesson is: if you don’t have to build a gene drive that can spread through a wild population, then don’t.”

The concept of a gene drive is an old one that was given new life by the advent of a genome-editing technique called CRISPR–Cas9. It allows researchers to make targeted changes to a genome with unprecedented ease and versatility.

Esvelt and others quickly realized that this technique could be used to engineer a gene drive by incorporating the genes encoding the Cas9 enzyme, which cuts DNA, and the guide RNAs, which direct Cas9 to a specific site, into the genome. Once present on one chromosome, the system can copy itself and the desired genome modification to the other chromosome, thus racing more rapidly through a population than a mutation would normally spread.

The first demonstration of this was published in March2 by developmental biologists Valentino Gantz and Ethan Bier at the University of California, San Diego. The team used gene drives to speed up genetic studies in certain species of fruit flies. But the publication kicked off concerns that the gene drive might escape from the lab into the wild, and the US National Academies of Sciences, Engineering and Medicine tasked a committee with evaluating the benefits and risks of the technology.

Even so, some researchers have embraced the approach, particularly as a means to prevent the transmission of insect-borne diseases such as malaria, says Esvelt. George Church, a bioengineer also at the Wyss Institute and a co-author on the latest report, predicts that gene drives to wipe out malaria and the tick-borne Lyme disease will be developed within the next two years. Esvelt is also collaborating with tropical-disease specialist Paul Brindley of George Washington University in Washington DC to study the application of gene drive to wiping out schistosomiasis, a disease caused by parasitic trematode worms.

But Esvelt worries that an accident could undermine the technique before it has a chance to prove its worth. “If anyone messes up and a gene drive gets out into the wild, there will be a huge media circus,” he says. “The message will be that scientists cannot be trusted to deal with this technology, and we will be set back by years.”

So he and his colleagues decided to develop safety measures using the yeast Saccharomyces cerevisiae. The organism is easy to work with in the laboratory and unlikely to spread a gene drive into wild populations because of its infrequent sexual reproduction.

Among the safety measures that they engineered was a ‘split drive’ in which the components of the gene drive are genetically separate. Some pieces of the system are inserted into the yeast genome; the other pieces are carried on a strand of DNA outside of the genome. If unleashed into the wild, the two components would not always be inherited together, slowing their spread through the population.

They also tested the ability of a second gene drive to undo the effects of a first — acting as a 'molecular eraser' to undo the genetic changes caused by the first gene drive. The second gene drive did so in 99% of offspring. Having this second drive in hand before an initial gene-drive release could be an important safety measure in some cases, Esvelt says.

Bier and Gantz say that they are developing similar safeguards in fruit flies. Although Bier says that the ability to undo a gene drive could be useful, he notes that its application may prove complicated. Neither gene drive will work in 100% of the population, meaning that the result will be a complex mix of different genome sequences. “I’m not saying it shouldn’t be done, but it would require some thoughtful modelling,” he says. And Esvelt notes that although the genetic changes may be undone, the effects on an ecosystem may not be fully reversible.

Even so, he hopes that the field will move to evaluate the benefits and risks of the technology’s applications, rather than dismissing gene drives outright. “Should we use gene drive to eliminate malaria? Should we use it to replace broadly toxic insecticides? These questions all have to be considered separately,” he says. “This paper is really about making sure we don’t blow it in the meantime and obviate the chance to talk about all of this.”