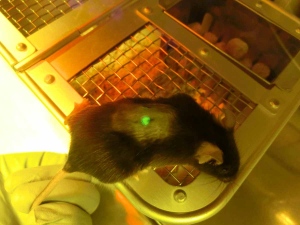 Induced stem cells have been used to grow and graft skin cells (glowing green) onto a mouse.

A paper published in Nature today1 could dispel a cloud over the hopes of turning a patient’s own cells into perfectly matched replacement tissues.

Scientists first reported in 2007 that a person’s cells could be reprogrammed to an embryo-like state, and so could form any type of cell in the body. Medical researchers immediately imagined using these ‘induced pluripotent stem (iPS) cells’ to create an endless supply of genetically matched replacement tissues to treat a range of diseases: fresh pancreatic tissue for diabetics, for example, or new nerve cells for people with Parkinson’s.

The strategy also seemed to offer a way around the ethical complexities of using stem cells derived from human embryos. But then came the worries about possible side effects. Particularly bad news came from a 2011 study2 showing that iPS cells provoked immune responses when injected into the mice from which they had been derived, casting doubt over one of the key advantages of the cells.

The latest Nature study1 rejects that conclusion. Masumi Abe, a geneticist at the National Institute of Radiological Sciences in Chiba, Japan, and his team took iPS cells derived from mice and injected them back into the animals. For comparison, they injected other mice with embryonic stem (ES) cells. Yet unlike the 2011 study, which saw iPS cells perform worse than ES cells, the team found no differences between the immune responses of each group. The researchers also transplanted skin and bone-marrow cells derived from iPS or ES cells into mice and achieved similar success rates between the groups. The immune response of both sets of tissues is “indistinguishable”, says Abe.

Konrad Hochedlinger, a stem-cell scientist at Massachusetts General Hospital in Boston, says that the result will probably “calm people down” about iPS cells. “It is definitely reassuring,” he says.

The findings follow another positive study on iPS cells, published late last year3, which found that the reprogramming process causes fewer mutations than previously thought. Flora Vaccarino, a neuroscientist at Yale University in New Haven, Connecticut, and her colleagues used high-resolution DNA analysis to compare the genomes of iPS cells and the adult cells from which they were derived. They found that most of the DNA mutations in the iPS cells did not arise during reprogramming but had been present in the parent cells.

“The result will probably calm people down. It is definitely reassuring.”

Yang Xu, a stem-cell scientist at the University of California, San Diego, and co-author of the 2011 study2, says that the new work does not dispel all concerns about the immune response provoked by iPS cells.

Xu points out that the skin and bone-marrow cells used in the latest study were not grown from iPS cells in culture, as they would be for clinical use. Instead, the researchers mixed iPS cells into early mouse embryos to make ‘chimaeric’ embryos. They then used skin and bone-marrow tissues that arose from iPS cells after the embryos grew into adult mice for their transplantation experiments. It is possible, says Xu, that the most immunogenic cells were rejected as the mice developed, which would explain why Abe and his colleagues observed a limited immune response. Transplanting tissues from chimaeric mice is “flawed”, he says.

Producing chimaeric embryos is a standard technique for testing whether mouse iPS cells have been fully reprogrammed, says Jakub Tolar, a clinician at the University of Minnesota in Minneapolis, but he notes that differentiating cells in culture outside the body is much harder. Tolar, who hopes to use iPS cells to treat the childhood skin disease epidermolysis bullosa, adds that iPS-cell therapies will use human cells, which could behave quite differently from mouse cells. “It’s helpful that they’ve done this, but it is absolutely different when you go to something that is cultured,” he says.

Hochedlinger believes that iPS cells are just as promising for cell transplantation as ES cells, although many issues stand between the lab and the clinic. The differences between the two kinds of stem cell are minor compared with the differences in how individual cell lines grow and differentiate in culture, he says.

“Based on what we know at this time from mice,” he says, “iPS cells are as good as ES cells, and should be as safe.”