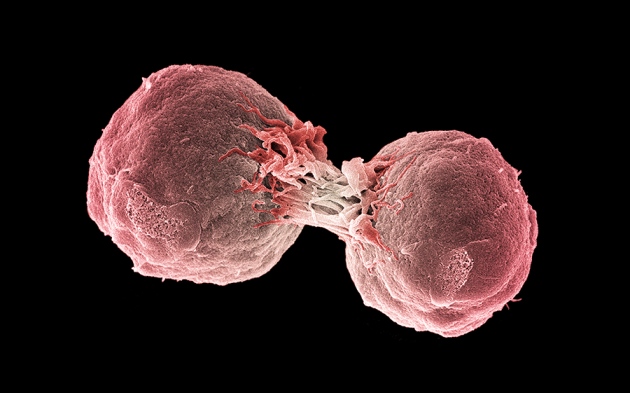 Dividing lymphoma cells, which can be destroyed by CAR-T therapy.

But progress of the therapy, called CAR-T, has been marred by its toxicity; several deaths have been reported in clinical trials. Even as the first company readies its application to the US Food and Drug Administration (FDA) — expected by the end of the year — researchers are hard at work to make the supercharged T cells safer.

Doing so is crucial to expanding the use of the therapy to more people, says Anthony Walker, a managing partner at Alacrita, a consulting firm in London. “Right now it is heroic medicine,” he says — a gruelling treatment deployed only in people for whom all else has failed. “Patients are taken sometimes to within an inch of their lives.”

Most CAR-T procedures begin by harvesting a patient’s white blood cells and sifting out the T cells. Those T cells are engineered to recognize cancer cells, and then infused into the patient, ready to do battle. The approach has shown remarkable success against leukaemias and lymphomas: in one study, all traces of leukaemia disappeared in 90% of the patients who received the treatment (S. L. Maude et al. N. Engl. J. Med. 371, 1507–1517; 2014).

Results such as those have fuelled an investor frenzy. “It set the field on fire,” says Walker. Swiss pharmaceutical giant Novartis invested in the technique in 2012. In 2014, CAR-T firm Kite Pharma of Santa Monica, California, raised US$128 million when it went public. A few months later, one of its competitors, Juno Therapeutics of Seattle, Washington, yielded $264 million in its initial public offering.

Now Kite is racing to be the first to bring a CAR-T therapy to the market. On 18 October, the company will update investors on its plans to manufacture and sell the complex therapy, which it hopes to launch in 2017.

But the treatment’s toxicity has discouraged some investors. On 26 September, Kite released interim clinical-trial results — widely seen as successful — in people with aggressive non-Hodgkin’s lymphoma (see go.nature.com/2djdqen). Yet about one-third of the patients developed serious neurological side effects, and 18% developed a deadly condition called cytokine release syndrome, which can cause organ failure. Two of the 62 patients died as a result of the treatment.

That toxicity is unlikely to dissuade the FDA, given the dramatic effects of the treatment, says analyst Michael Yee of the investment bank RBC Capital Markets in San Francisco, California. “It has transformed what was essentially a death sentence into a potential for long-lasting remission,” he says.

“It has transformed what was essentially a death sentence into a potential for long-lasting remission.”

But the toxicity does leave room for improvement. One approach that researchers are studying to boost safety is to improve standardization of each patient’s dose of T cells. CAR-T therapies typically begin with a mixture of various kinds of T cell, some with very different functions. “Not all T cells are created equal,” says Stanley Riddell, an immunologist at the Fred Hutchinson Cancer Research Center in Seattle. To create a better-defined T-cell cocktail, Riddell’s lab first sorts out different types of T cell and blends them together again in specific proportions. So far, he says, trials in 140 patients suggest that the approach provides better control of dosage — and toxicity (see, for example, C. J. Turtle et al. J. Clin. Invest. 126, 2123–2138; 2016).

Other groups have developed a ‘suicide switch’ to shut off the CAR-T cells in the body. If toxicity is spiralling out of control, doctors can administer a drug that activates the switch — a modified version of a protein called caspase-9 — and triggers the CAR-T cells to self-destruct.

That approach has not been popular with clinical researchers, who often opt to treat toxic reactions with other drugs rather than risk shutting down the treatment altogether, notes Michel Sadelain, an immunologist at Memorial Sloan Kettering Cancer Center in New York City. “What you’re doing is destroying your extremely expensive medication after you’ve administered it,” says Walker.

But cancer researcher Malcolm Brenner of Baylor College of Medicine in Houston, Texas, says that the switch is not all or nothing: adding just a little of the activation drug can dampen toxic effects without killing all of the engineered T cells.

Michael Brown, a clinician and cancer researcher at the Royal Adelaide Hospital in Australia, is using the suicide-switch approach in his CAR-T clinical trial against melanoma. So far, he says, his patients haven’t needed it. But having the switch in place helped him to feel more secure about the trial, in which T cells target a protein that is more abundant in melanoma but is also expressed at low levels in normal brain tissue.

Many researchers hope to reproduce CAR-T’s success against leukaemia in solid tumours such as melanoma. And, like Brown, they are struggling to find proteins on cancer cells that could serve as targets for T cells but that are absent from normal tissues. One way could be to focus on multiple proteins expressed by cancer cells, says Sadelain. The therapy will then attack only cells that express all of those proteins, to provide a more precise way to mark tumour cells for destruction.

For now, all eyes are on Kite to see whether it can get its therapy approved by regulators and into hospitals. Even if the company succeeds, Walker is betting that the treatment will be the first in a long line of CAR-T therapies. “We’re at such an early stage in this field,” he says. “If you wind the clock forward 10–15 years, I think it will be unrecognizable.”