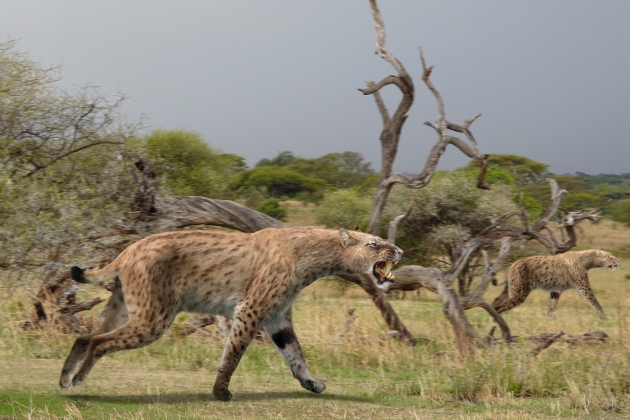 The sabre-toothed cat Homotherium latidens might have travelled between Eurasia and North America.

Sabre-toothed cats existed in Europe for hundreds of thousands of years longer than previously thought, according to a study1 that settles a long-running debate among palaeontologists. The authors also found evidence that Homotherium latidens, a Eurasian sabretooth, and Homotherium serum from North America are genetically almost indistinguishable.

The findings are part of a project that used partial genome reconstructions to examine the evolutionary history of Homotherium sabre-toothed cats, which had smaller, more serrated fangs than Smilodon — the sabretooth most people think of, with its long fangs. The latest results, published on 19 October in Current Biology1, upend ideas of how Homotherium moved between continents and when it went extinct.

When a trawler dredged up an ancient H. latidens jawbone while fishing in the North Sea off the Netherlands in 2000, it sparked controversy. Radiocarbon dating showed that the specimen was just 28,000 years old2, shocking palaeontologists: the youngest Homotherium fossil found in Eurasia up to that point was about 300,000 years old. The analysis of ancient DNA in the latest study confirms the age of the North Sea specimen.

The team also constructed partial genomes of two H. serum fossils from the Yukon Territory in Canada and the North Sea H. latidens specimen. The two species were so similar genetically that they should probably be combined under the H. latidens name, says Johanna Paijmans, a palaeogeneticist at the University of Potsdam in Germany and lead author of the study.

But combining the species might be a bit premature until researchers find more sabretooth specimens in Europe, says Julie Meachen, a palaeontologist at Des Moines University in Iowa.

Until then, researchers can only speculate as to why there’s such a huge gap in the Eurasian sabretooth fossil record and how animals on two different continents could be so genetically similar. Migration between Homotherium populations in Eurasia and North America could explain the species’ similarities, Meachen says.

It could also explain why sabretooths seem to pop back into existence in the fossil record hundreds of thousands of years after researchers thought they died out in Europe. The North Sea specimen could be evidence that the cats migrated back into Western Europe from Asia or over the Bering land bridge from North America. Or it could be that the Eurasian H. latidens population dwindled to such low numbers that the animals just don’t show up in the fossil record, says Paijmans.

“There’s no reason it can’t be both,” says Margaret Lewis, a palaeontologist at Stockton University in Galloway, New Jersey. She adds that the species was probably very mobile, and that carnivores in general are always rarer in the fossil record than prey animals because there aren't as many predators. Some answers certainly lie in the DNA of the older European fossils, says Lewis.

But the technology to obtain those answers simply doesn’t exist yet, says Paijmans. As DNA ages, it degrades and becomes harder to extract. Right now, researchers can obtain DNA from the mitochondria — a cell’s battery pack — of younger specimens such as the North Sea Homotherium, but not from older fossils. However, Paijmans remains hopeful that the technology will eventually catch up.